House Intelligence chair shunned by Fresno Bee — over his health care hypocrisy, not his fealty to Trump 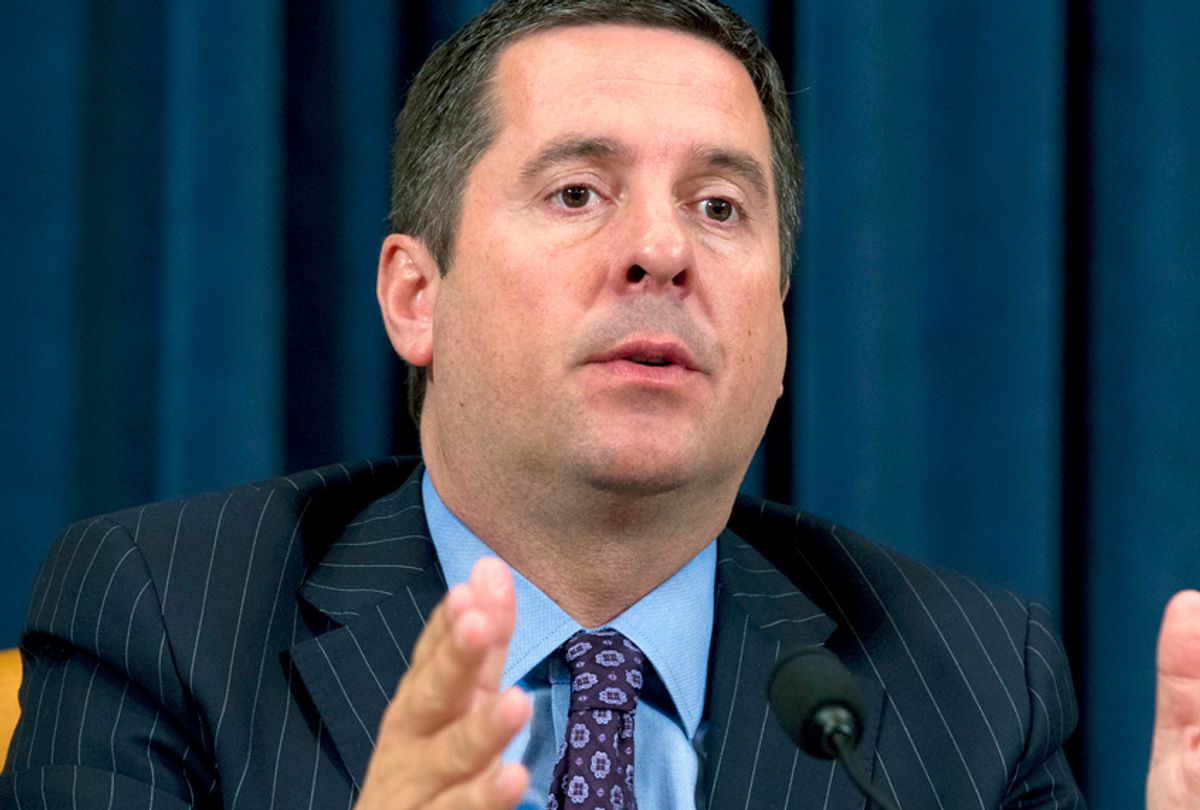 The Bee, which had backed Nunes in every race since 2002, announced Saturday that it was endorsing Democratic challenger Andrew Janz.

The paper touted Janz's promise to hold at least four town halls each year and remain available to constituents. Nunes has come under fire for refusing to participate in an open town hall in his Central Valley district since 2010.

The Bee also noted Nunes' bizarre behavior as chairman of the House Intelligence Committee, writing that he seemed more interested in protecting President Donald Trump from the Russia investigation than in his “constitutional obligations as an independent arm of government.”

The key policy reason the paper cited for backing Janz over Nunes, however, was health care.

Nunes voted for a Republican House bill that would have gutted coverage of pre-existing protections under Obamacare and included large cuts to Medicaid.

“In Nunes’ district, 313,000 people were enrolled in Medi-Cal as of January,” the Bee reported. “Of those, 74,000 would have immediately lost coverage, and all would have had their coverage impacted through loss of benefits or access to doctors.” Medi-Cal is the state's version of Medicaid.

Health care has been overshadowed by Trump, Russia and Brett Kavanaugh on the national stage but it remains the single biggest issue in many House and Senate races, with Democrats driving the conversation.

Nearly half of all Democratic campaign ads have focused on health care. Roughly 63 percent of voters said a candidate's position on pre-existing condition protections are either “very important” or the “single most important factor.”

As a result of the renewed focus on health care, many Republican candidates who vocally fought Obamacare's protections for pre-existing conditions are now running as defenders of those protections, despite backing replacement bills that would largely fail to ensure the same level of coverage as Obamacare.

Republican Senate candidates Josh Hawley in Missouri, Mike Braun in Indiana, Martha McSally in Arizona, Patrick Morrisey in West Virginia and Rick Scott in Florida are all running on protecting coverage for pre-existing conditions despite their history of fighting the very law that ensures them. The same thing is happening on the House side, where incumbent Republicans like Dana Rohrabacher in California are running ads touting their defense of pre-existing condition protections. Reps. Cathy McMorris Rodgers of Washington and Bruce Poliquin of Maine, both Republicans, have even scrubbed their websites of their past opposition to the law, Forbes reports.

"Republicans can’t defend their indefensible work to rip health care away from those of us with pre-existing conditions and raise our costs, all while giving tax breaks to their insurance and drug company donors,” Amanda Harrington, a spokeswoman for the pro-Obamacare group Protect Our Care, told the outlet. “That's why Republicans are trying to erase their repeal record from memory -- they're scrubbing language from their website, pushing meaningless, toothless resolutions and avoiding constituent and reporter questions on health care. But the trouble for them is that we all remember the damage Republicans have done and continue to do to our health care -- and we're not going to forget it, either."

The polls suggest as much as well. A Fox News poll last month found that half of voters prefer Democrats on health care while just 34 percent said Republicans would do a better job on the issue. Among voters who named health care as their most important issue in a September CNN poll, 75 percent backed Democratic Rep. Kyrsten Sinema in the Arizona Senate race, compared to 14 percent who backed her Republican opponent, Rep. Martha McSally. In Tennessee, voters who said health care was their most important issue, 71 percent back former Gov. Phil Bredesen, a Democrat, compared to 21 percent who support his Republican opponent, Rep. Marsha Blackburn.