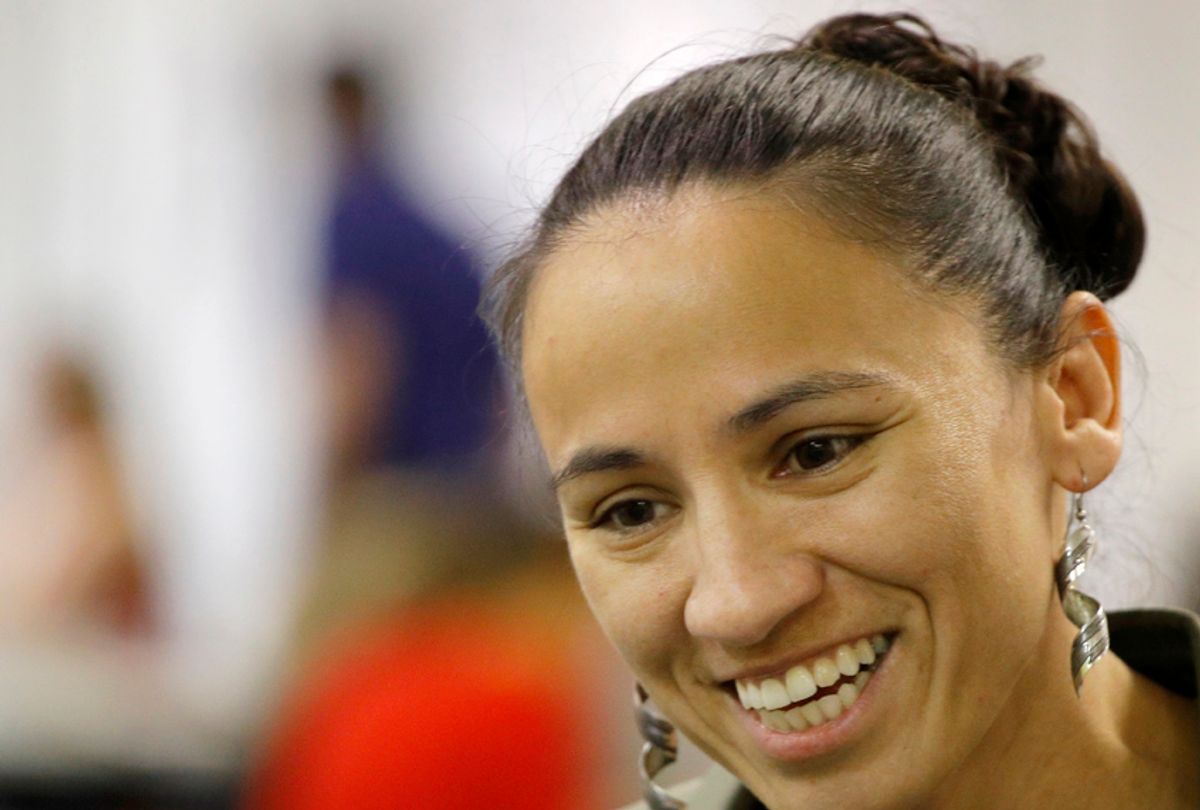 Kansas Republican Michael Kalny has resigned from his position as a precinct committeeman after he made racist and homophobic comments about Kansas Democratic congressional candidate Sharice Davids, who is openly gay.

Earlier this week, Kalny wrote of Davids in a Facebook post, "your radical socialist kickboxing lesbian Indian will be sent backpacking to the reservation" — an apparent reference to her Native American heritage. Davids is a member of the Ho-Chunk Nation tribe and is vying for the seat in Kansas' third district occupied by four-term Republican Rep. Kevin Yoder.

"Little Ms. Pritchett- you and your comrades stealth attack on Yoder is going to blow up in your leftist face," Kalny wrote. "The REAL REPUBLICANS will remember what the scum DEMONRATS tried to do to Kavanaugh in November. Your radical socialist kickboxing lesbian Indian will be sent backpacking to the reservation."

According to The Kansas City Star, Kalny shared the Facebook message with Anne Pritchett, president of the north chapter of the Johnson County Democratic Women. Pritchett took a screenshot of the message, which subsequently went viral.

C.J. Grover, a spokesman for Yoder, condemned Kalny's comments, saying, "Kevin [Yoder] doesn't believe this type of rhetoric is appropriate at all. It’s unacceptable. These kind of nasty personal attacks are all too prevalent in politics these days, and it needs to stop."

Jim Joice, executive director of the Kansas GOP, also expressed his disapproval of Kalny's remarks, but saw the moment an opportunity to criticize Democrats as well.

"This is the same type of rhetoric we condemn the left for," he said. "We must be better than this."

When The Kansas City Star reached out to Kalny for comment, he responded, "What is this lady trying to accomplish?" The newspaper noted that it wasn't clear who Kalny was referring to. When pressed about whether he wrote the message on Facebook, Kalny said he needed to speak to his attorney and hung up.

Pritchett said the message left her "stunned," while Davids said it "doesn't represent Kansas values, and it doesn't represent the values of the Republicans we know, many who support this campaign."

Kansas values have been a critical question throughout the congressional race, and Yoder has previously lashed out at Davids for not representing the state's values. On the night of the Kansas Democratic primary — before the race between Davids and her opponent, Sen. Bernie Sanders-endorsed Brent Welder, had not yet been called — Yoder told a crowd that "neither of them are from around here, and both want to force their radical ideas on those of use who have dedicated our entire lives to this community and this state."

Though Davids was born and raised in Kansas, Yoder said, Davids and Welder "don't know Kansas. They don't know our values."

If elected, Davids would be the nation's first female Native American member of Congress as well as Kansas' first openly gay representative. She could possibly share that first distinction with Debra Haaland, a Native American woman who is running for a congressional seat in New Mexico's First District as a Democrat.

When asked about how she feels about potentially being the first Native American woman elected to Congress, Davids told Salon, "It's just disbelief, like, really? We have a lot of educated Native women who are active in politics. … It feels like it's about time."

The Kansas race has captured the attention of the White House, with President Donald Trump tweeting his support for Yoder and Vice President Mike Pence raising money for Yoder's re-election campaign. Nevertheless, the Johnson County Republican remains vulnerable in a district that Democrat Hillary Clinton won in 2016 — and one that could give the Democrats a chance at capturing a U.S. House majority in the fall.

According to the results of a recent Sienna College poll, Davids leads Yoder by double-digits — 51 percent to 43 percent. The Cook Political Report currently describes Kansas' third district as "Lean Democratic."