It's the nation's highest civil honor 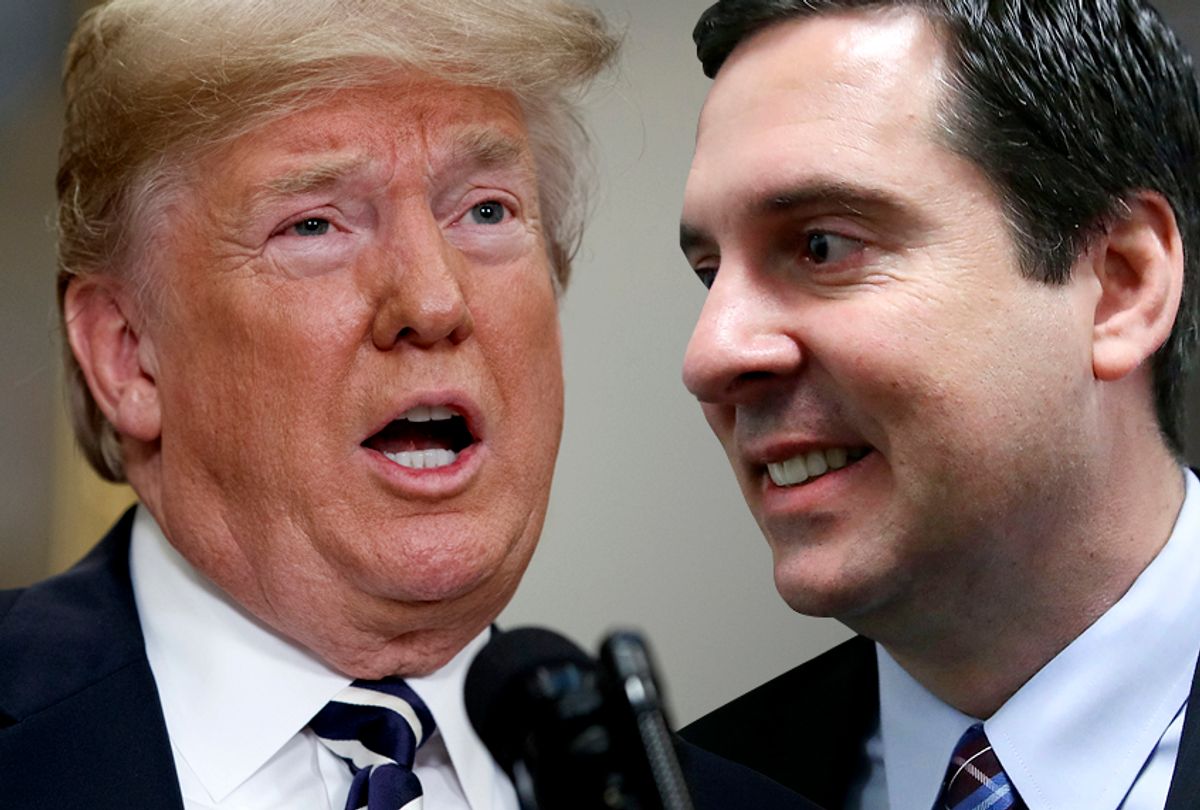 President Donald Trump on Thursday sang the praise of House Intelligence Committee Chairman Devin Nunes, R-Calif., declaring that Nunes deserves the nation's highest civilian honor for his efforts to push back against the Russia investigation.

"If this turns out as everyone thinks it will, Devin Nunes should get the Medal of Honor," Trump said during an interview on "Fox & Friends."

"He really is, what he has gone through and his bravery," he continued.

The president later corrected himself and said that the California lawmaker should receive the Medal of Freedom, not the Medal of Honor, which is awarded only to members of the armed forces recognized for acts of bravery during war.

"He should get a very important medal," Trump said of Nunes. "Maybe we'll call it Medal of Freedom because [that's] we actually give them, high award for civilians."

Trump's declaration appeared to be a suggestion first made by Fox News host Sean Hannity, who has emerged as one of Trump's most trusted adviser, who told Nunes he "frankly deserves the Medal of Freedom for really showing, sadly, the biggest abuse of power corruption scandal."

Nunes has been an ardent defender of the president in relation to the ongoing investigation into Russian interference in the 2016 presidential election led by special counsel Robert Mueller. A GOP-led investigation conducted by the House Intelligence Committee, from which Nunes was forced to recuse himself after it was revealed he was working as a shill for the White House, found no evidence of collusion between the Trump campaign and the Russian government's efforts to interfere in the 2016 election.

The Republican congressman in February released a report alleging that the FBI abused its surveillance authority, especially when it attempted to obtain a surveillance warrant against former Trump campaign adviser Carter Page. The partisan memo came under fierce scrutiny as having conveniently omitted critical details, misrepresenting facts and providing an incomplete assessment of the process by which surveillance warrants against Page were obtained.

Trump has fiercely denied claims that his presidential campaign colluded with Russia, frequently blasting the probe a politically motivated "witch hunt" and a "hoax." Mueller's investigation has widened to include possible obstruction of justice by the president.

Nunes is currently running for reelection and facing a tight House race. He was recently dumped by his hometown paper, The Fresno Bee, who recently announced they would back Nunes' Democratic challenger Andrew Janz in California's 22nd congressional district.

The Bee, which has endorsed Nunes in eight consecutive elections, noted Nunes' bizarre behavior as chairman of the House Intelligence Committee, writing that he seemed more interested in protecting President Donald Trump from the Russia investigation than in his "constitutional obligations as an independent arm of government."