Will Supreme Court kill Medicare for All? Maybe — Democrats should fight for it anyway

The Kavanaugh court will find some excuse to destroy Medicare for All. That's no excuse for not fighting 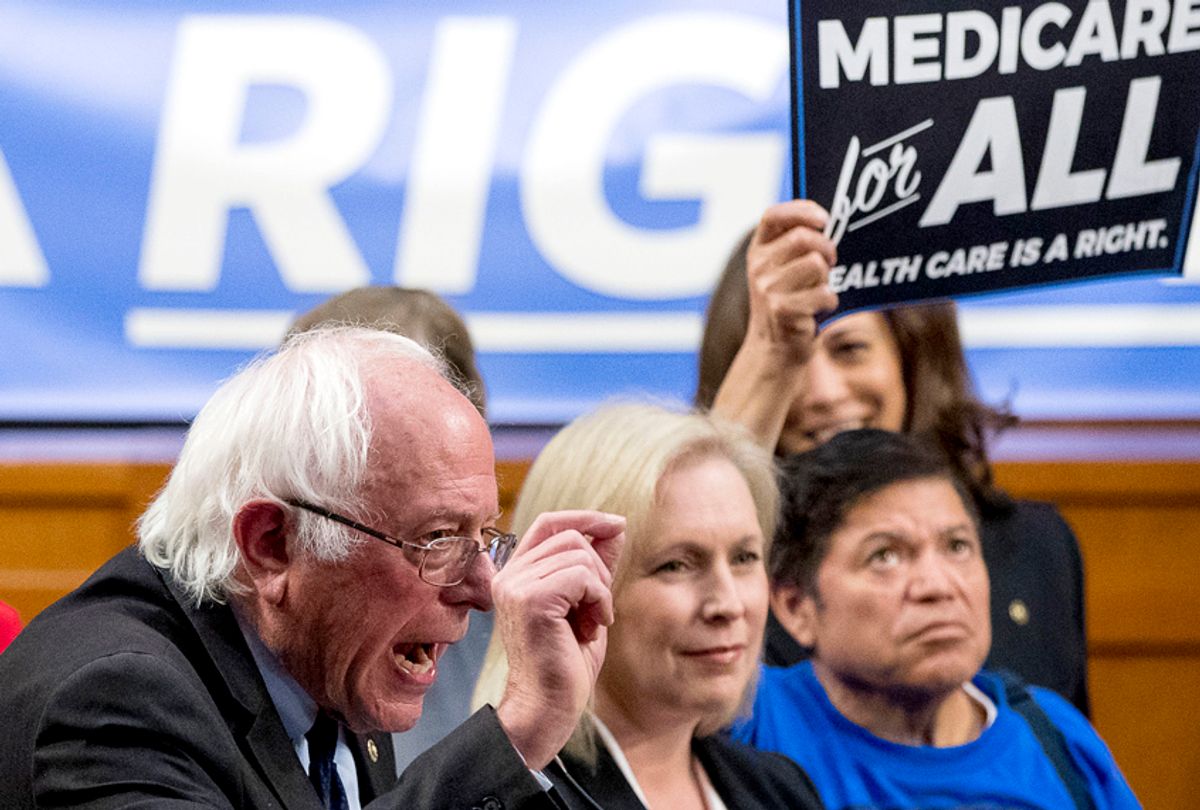 Bernie Sanders, accompanied by Kirsten Gillibrand, speaks to unveil their Medicare for All legislation to reform health care. (AP/Andrew Harnik)
--

During the confirmation process of Brett Kavanaugh, who is now a Supreme Court justice, most of the concerns of progressives have focused on what this new court will mean for existing laws and regulations. With the highest court in the land dominated by conservative justices, most of them appointed by presidents who lost the popular vote, Republicans can swiftly dismantle decades worth of democratically popular policies, from health care to environmental protections.

But the current makeup of the Supreme Court isn't just a threat to laws protecting the health and safety of Americans passed in our more democratic past. It's also an enormous threat to future legislation. Even if Democrats are able to overcome the increasingly unfair electoral landscape to regain control of both Congress and the White House,  it's an open question whether or not they will be able to get any legislation past the firewall of a corrupt, partisan Supreme Court that will not let concerns about democracy or intellectual honesty prevent its majority from ripping up any bill that Democrats pass.

This concern is even more pressing as a new, younger crop of Democratic politicians are running, often on the promise of bold legislative ideas such as Medicare for All or Sen. Elizabeth Warren's massive anti-corruption bill. Should Democrats even bother to put political capital, resources and energy towards passing such bills, when there's a strong chance that the Supreme Court will find some excuse, no matter how thin, to gut them?

The question came up on a recent episode of "The Weeds," a Vox podcast. The hosts were mostly addressing a current challenge to the Affordable Care Act, and how the current Supreme Court could well choose to dismantle Barack Obama's signature legislation. The actual legal arguments in the case are laughably bad, but that was the point the hosts were highlighting: The starkly partisan court, especially with Kavanaugh now seated, is no longer beholden to the concept of good-faith readings of the law, and is free to use thin pretenses to throw out laws written by Democratic legislators.

In passing, the hosts discussed what this means for Medicare for All, noting that if the Supreme Court destroys the Affordable Care Act, then it's a solid bet it will find an excuse to do the same for any law that creates a single-payer health care system in the future. They wondered whether it was even worth passing such a law, knowing it would likely be rapidly thrown out by the court.

Traditionally, the answer to the question of whether the legislature should pass laws they know the courts will evacuate has been a hearty no. But I would argue, in the case of Medicare for All and other signature bills, that Democrats should move forward anyway -- not just in spite of the Supreme Court, but because of it. If the court keeps shooting down popular legislation in big cases that draw major media attention, that can help educate voters on how politicized, and how reactionary, it has become.

One of the biggest problems Democrats face is that liberal-leaning voters are poorly educated on how anti-democratic and right-wing the federal courts have become, after decades of Republicans -- aided by groups like the Federalist Society -- stuffing the bench with arch-conservative hacks. Despite this, the research, at least prior to the Kavanaugh showdown, indicates that liberal voters believe the Supreme Court justices are far more progressive than they really are.

The legacy of the mid-20th century Supreme Court — which desegregated schools, legalized contraception and protected free speech — has lulled people, decades after Republicans started chipping away at these groundbreaking decisions, into underestimating how reactionary the court has become. That this myth remained strong is evidenced by how it survived ridiculously dishonest decisions that were clearly meant to give Republicans electoral advantages, like Citizens United v. FEC or Bush v. Gore.

The results of this ignorance have been devastating. It certainly contributed to the 2016 situation where conservatives, eager to seize and solidify their control of the judiciary, voted Donald Trump in large numbers while liberals, overly complacent about the threat to the courts, failed to show up in the numbers necessary to push Hillary Clinton into the White House.

The appointment of Kavanaugh, with all his blustering misogyny, to the court has finally drawn some liberal attention to the issue of far-right judges being stacked on the courts. But that may not be enough to break the long-standing liberal myth that the Supreme Court is fair or intellectually honest.

All of which is why, if they manage to win Congress and the presidency, Democrats should not be worried about passing a bunch of bold bills, even if the Supreme Court is certain to strike them down. In the past, such a strategy would reasonably have been viewed as a waste of time and resources that could be put toward passing bills that have a chance of survival. But it's unlikely that even modest reforms will survive the right-wing shredder of the current Republican-stacked Supreme Court. So Democrats might as well go for broke.

By doing so, they have a real opportunity to educate voters about the corruption of the court. Passing bills that have a huge array of easily understood benefits to people — and then seeing the court take those benefits away — would be a story that can't fly under the radar. And presumably, at some point relatively soon the Trump circus will be over, so the actual news won't have to compete with endless distractions from the big-mouthed bigot in the Oval Office.

The laws of politics, once assumed to be as certain as gravity, have changed in many ways. But one of the biggest such laws ones is that with a Supreme Court geared mainly toward serving as a conservative firewall against legislative progress, Democratic elected officials have nothing left to lose. It's time to start taking the political risks that used to be impossible to imagine. So whenever Democrats are finally back in power, it's time to start daring the Supreme Court to take away huge wins like Medicare for All, and learning what kind of impact that has on the voters.