Trump two-step: President says he's behind Jim Mattis after calling him "sort of a Democrat"

Defense secretary says Trump called him after derisive remark to say, "I’m 100 percent with you" 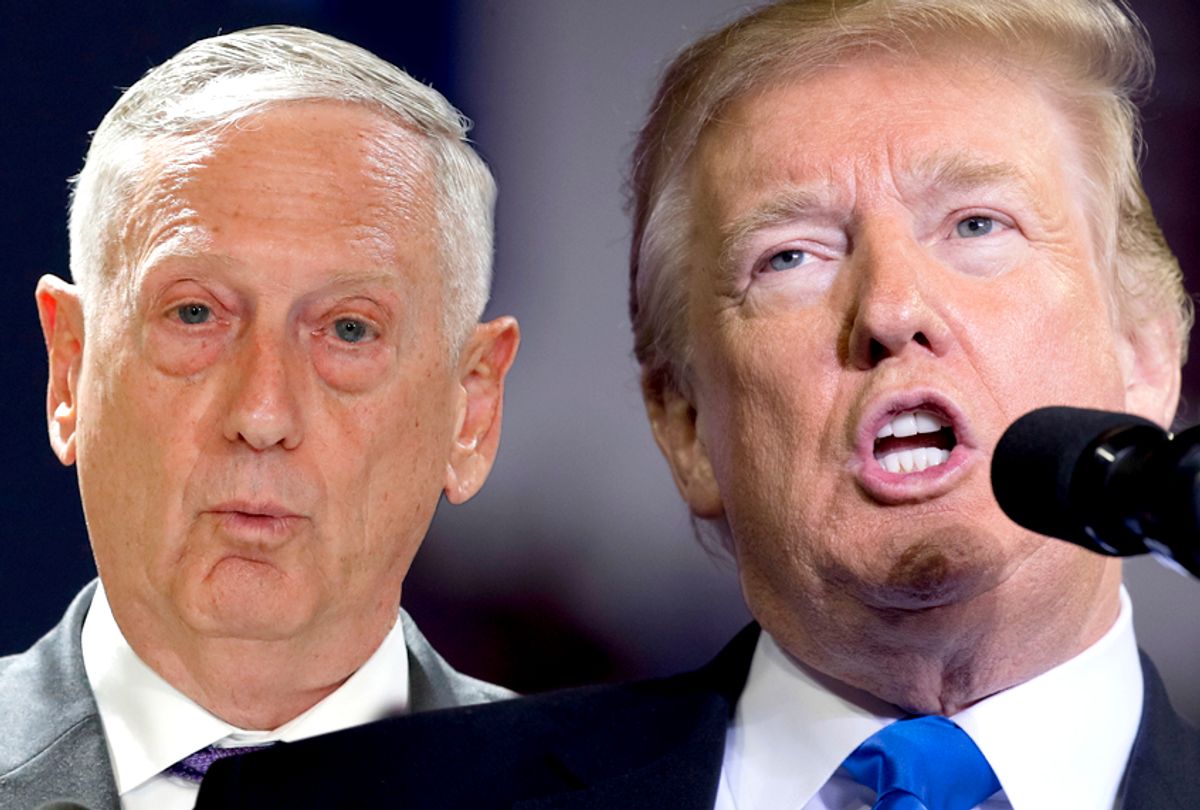 President Donald Trump has seemingly walked back his derisive reference to Secretary of Defense Jim Mattis as "sort of a Democrat," which he uttered during a controversial "60 Minutes" interview that aired on Sunday night.

According to Reuters, Mattis told reporters during his current trip to Vietnam that Trump had later called him and said, "I’m 100 percent with you." The defense secretary also insisted, "I have never registered for any political party" and said that to serve as a career military office, one must be "proudly apolitical" in order to take orders from both Democratic and Republican presidents.

"I’m on his team. We have never talked about me leaving. And as you can see right here, we are on our way [to Asia]. We just continue doing our job," Mattis told reporters, regarding his relationship with Trump and his administration.

During the controversial "60 Minutes" interview, Trump said of Mattis: "I think he’s sort of a Democrat, if you want to know the truth. But Gen. Mattis is a good guy. We get along very well. He may leave. I mean, at some point, everybody leaves."

Don Foster, the retired literary scholar who successfully identified journalist Joe Klein as the anonymous author of the Clinton-era novel "Primary Colors," has argued in a Salon essay that Mattis was likely the author of a New York Times op-ed in September which claimed that a "resistance" movement of "adults in the room" inside the administration was preventing Trump from undermining America:

Jim Mattis would never shoot a fellow American for having insulted his intelligence, courage, logic or professionalism. A charge of “treason,” though, that’s harder to forgive. He’s no traitor. And he has a pretty vigorous support group. No living U.S. soldier commands more respect from the Joint Chiefs of Staff and from the rank and file than James “Mad Dog” Mattis. (A nickname the secretary reportedly dislikes, and that those close to him do not use.)

If I were Donald Trump at this moment, I would not be worried about impeachment. I’d be sweating a military coup.

Schlesinger, as Gergen added, was not actually anywhere near the top of the constitutional chain of command. "Nixon was the commander in chief," he said, "and Schlesinger in effect was saying, 'We’re going to override the commander in chief if in fact we think it’s coming from some sort of aggressive personality or he’s just pissed off. Whatever it may be.' And I’ve asked people in the Defense Department, ‘Do you think there’s a similar arrangement today between [Secretary of Defense Jim] Mattis and the four-star generals?’ And the answer they’ve given me back -- I don’t think there’s any reason to believe he’s giving such an order ... [is] that if they’re given an order that they think comes from an erratic personality, they will double-check it with the secretary before they carry it out."

Blumenthal made a similar observation when asked about Trump's potential management of the North Korea crisis. "Nobody knows what will happen with North Korea," he said. "And if Secretary Mattis were not in his position, and it was presumed that Trump either acted entirely on his own judgment or ignored what Mattis might suggest, then we're completely at sea."