Rep. Chris Collins wasn't supposed to be a vulnerable Republican — until he was indicted for insider trading 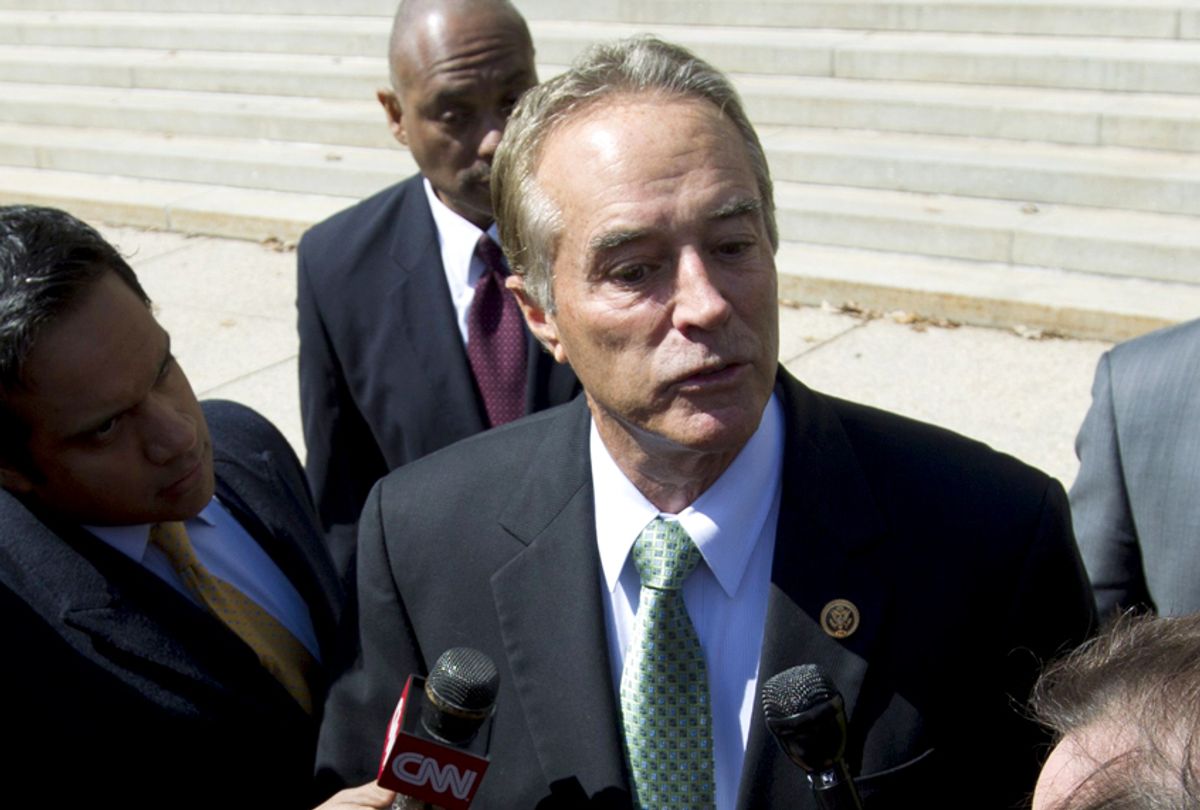 Rep. Chris Collins speaks with reporters as he leaves a closed-door meeting with then presidential candidate Donald Trump in 2016. (AP/Jose Luis Magana)
--

Republicans may lose a district in western New York state they previously considered safe after incumbent Rep. Chris Collins was indicted on insider trading charges, according to a new Siena College poll.

Collins, who was the first member of Congress to endorse Donald Trump in his 2016 presidential campaign, leads Democrat Nate McMurray by just three  points in New York's 27th congressional district, well within the survey's margin of error. An earlier poll showed Collins tied with McMurray.

Collins was indicted on charges of insider trading in August. He pleaded not guilty in September.

Even with the incumbent facing a potential prison sentence, Republicans did not expect this race to be a close one. The GOP holds a 40,000-voter advantage in the district, which includes parts of suburban Buffalo and Rochester. Trump has an 18-point net positive job approval rating in the district, which he carried by more than 24 points in 2016. Collins won his previous re-election bid by 35 points.

It is just one of the heavily Republican districts where Democrats now find themselves competitive this cycle.

Democrat Richard Ojeda is within striking distance of Republican Carol Miller in West Virginia's 3rd congressional district, which backed Trump by a whopping 50 points. Polls have shown both Ojeda and Miller leading over the past month, though Miller has a two-to-six-point lead in two October polls. The two are running for Republican Evan Jenkins' old seat, which he gave up in an unsuccessful run for U.S. Senate. A flip in the West Virginia 3rd would be one of the biggest swings in electoral history. FiveThirtyEight rates the district more than 37 points more Republican than the country as a whole.

FiveThirtyEight's Nate Silver wrote in a recent column that while Democrats are not likely to win every single “likely Democrat” or “lean Democrat” race, it is equally unlikely that the Republicans will win all of the races that favor them. In other words, some key pickups in the House will come from races Democrats were not expected to win.

“These races are long shots individually for Democrats — a 'likely R' designation means that the Democratic candidate has only between a 5 percent and 25 percent chance of winning in that district, for instance. But they’re not so unlikely collectively: In fact, it’s all but inevitable that a few of those lottery tickets will come through,” Silver wrote. “On an average election night, according to our simulations, Democrats will win about six of the 19 'lean R' seats, about seven of the 48 'likely R' seats — and, for good measure, about one of the 135 'solid R' seats.”

Democrats certainly have the resources to make a late-stage bid for a number of races that currently lean Republican. The opposition party has raised nearly twice as much money as Republicans in House races, an unprecedented advantage.

Democrats have at least doubled their opponents in fundraising in the 108 districts the Cook Political Report rates as the most competitive, and in some cases have raised more than three times as much money. According to NBC News, the average Democratic House candidate in these races has raised $1.48 million in the last quarter. The average Republican has raised just $559,000.