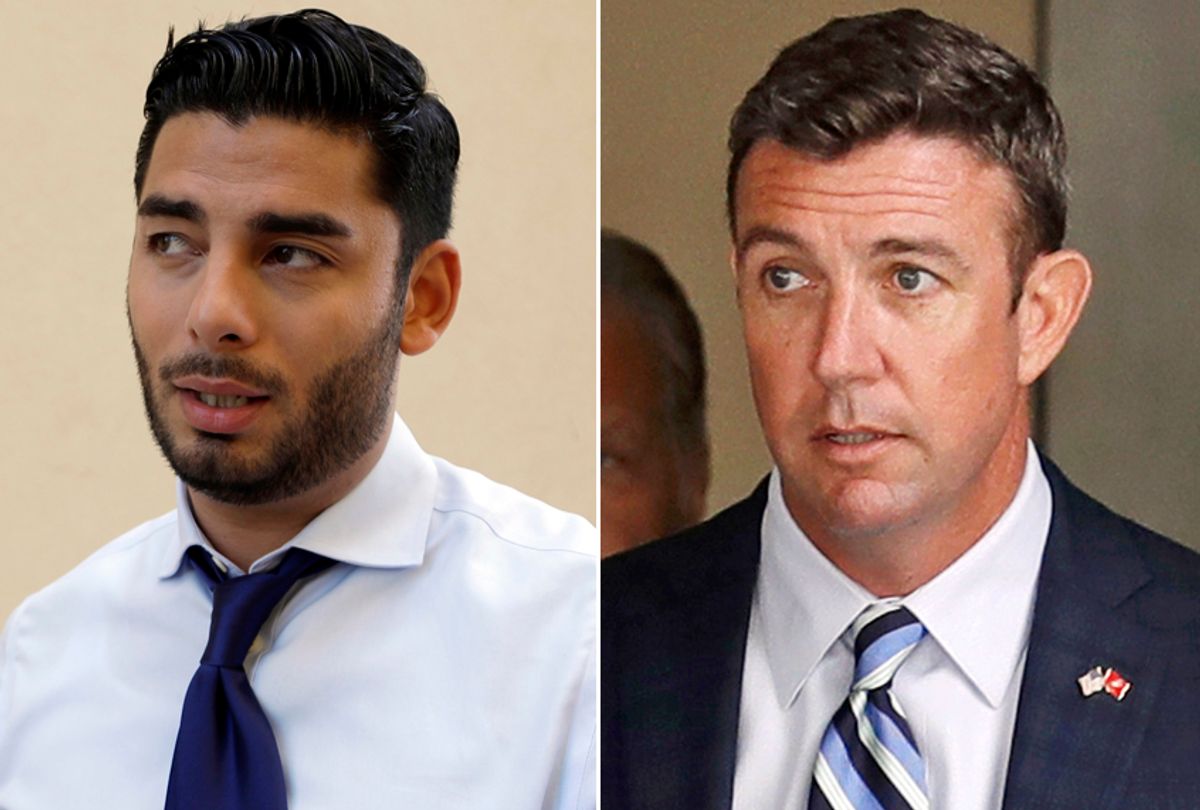 Rep. Duncan Hunter, an embattled Republican incumbent in California, is attempting to smear his Democratic opponent by accusing him of being a terrorist sympathizer and a “security risk.”

Hunter, who was expected to easily win re-election before he and his wife were indicted on federal charges that they used more than $250,000 in campaign contributions to fund their lavish lifestyle, has resorted to blatantly false and anti-Muslim attacks against Ammar Campa-Najjar, his Democratic challenger in California's 50th congressional district.

The 29-year-old Campa-Najjar, who is of Latino and Palestinian descent, worked for the Obama administration in the Labor Department, where he was granted a security clearance.

Hunter has chosen to focus on Campa-Najjar's grandfather, Yasser al-Najjar, who was involved in the terrorist attack on Israeli Olympic athletes in Munich, Germany, in 1972. Al-Najjar was killed in the ensuing siege, 16 years before his grandson was born.

That has not stopped Hunter from accusing Campa-Najjar of trying to “infiltrate” the government.

“He changed his name from Ammar Yasser Najjar to Ammar Campa-Najjar, so he sounds Hispanic,” Hunter told a Republican women's group in September, according to NPR. “That is how hard, by the way, that the radical Muslims are trying to infiltrate the U.S. government.”

Campa-Najjar said he changed his name to honor his Hispanic mother's heritage. He has said he also converted to Christianity years ago.

Hunter even doubled down with a campaign ad accusing Campa-Najjar of trying to hide his family's connection to terrorism. The Washington Post Fact Checker rated the ad 4 Pinocchios.

Hunter's attacks reflect the drastic shift in California's 50th district, which is largely in the inland suburbs of San Diego, north and east of the city. Hunter has represented the district since 2008, when he succeeded his father, Duncan Lee Hunter, who was first elected in 1980. The younger Hunter has been wildly popular, winning re-election with 64 percent of the vote in 2016. Following his 60-count indictment, however, polls show the race in a dead heat even though Republicans hold a 14-point voter registration advantage.

“It’s a whisper campaign,” Campa-Najjar told the New York Times, discussing Hunter's attempt to depict him as untrustworthy. “One guy was cleared by the F.B.I. to work in the White House. The other was indicted by the F.B.I.”

Similar allegations have been lobbed at Democratic candidates in Ohio, Virginia and New Jersey.

Ohio Republican Rep. Steve Chabot is trying to tie his Democratic challenger in the state's 1st district, Aftab Pureval, to terrorism because a law firm he previously worked for was involved in settling terrorism-related lawsuits against Libya. The New York Times reports that Pureval was not directly involved with the settlements, which were approved by Congress. Chabot won his previous re-election by nearly 20 percent, but the nonpartisan Cook Political Report now rates his race a “toss-up.”

Virginia Democrat Abigail Spanberger, running to unseat Republican Rep. Dave Brat in the state's 7th congressional district, in the Richmond suburbs, has come under attack for teaching English as a substitute teacher at a Muslim high school. Another ad accused her of “giving $100 billion to the leading sponsor of terrorism,” a convoluted reference to her vote to back the Iran nuclear deal, the New York Times reported. Brat, who made national headlines with his startling primary victory over onetime House Majority Leader Eric Cantor in 2014, won re-election two years ago with nearly 58 percent of the vote. He and Spanberger appear to be in a virtual tie, according to polls released in September.

The attack ads against Spanberger are being paid for by House Speaker Paul Ryan's House Leadership PAC, which also recently launched an ad that depicts Democrat Tom Malinowski, a candidate in New Jersey's 7th congressional district, of being a terrorist sympathizer because he argued for due process rights for Guantánamo Bay detainees and worked with the late Sen. John McCain to ban torture. Incumbent Republican Rep. Leonard Lance won his last election with 54 percent of the vote but now trails Malinowski, according to recent polls.