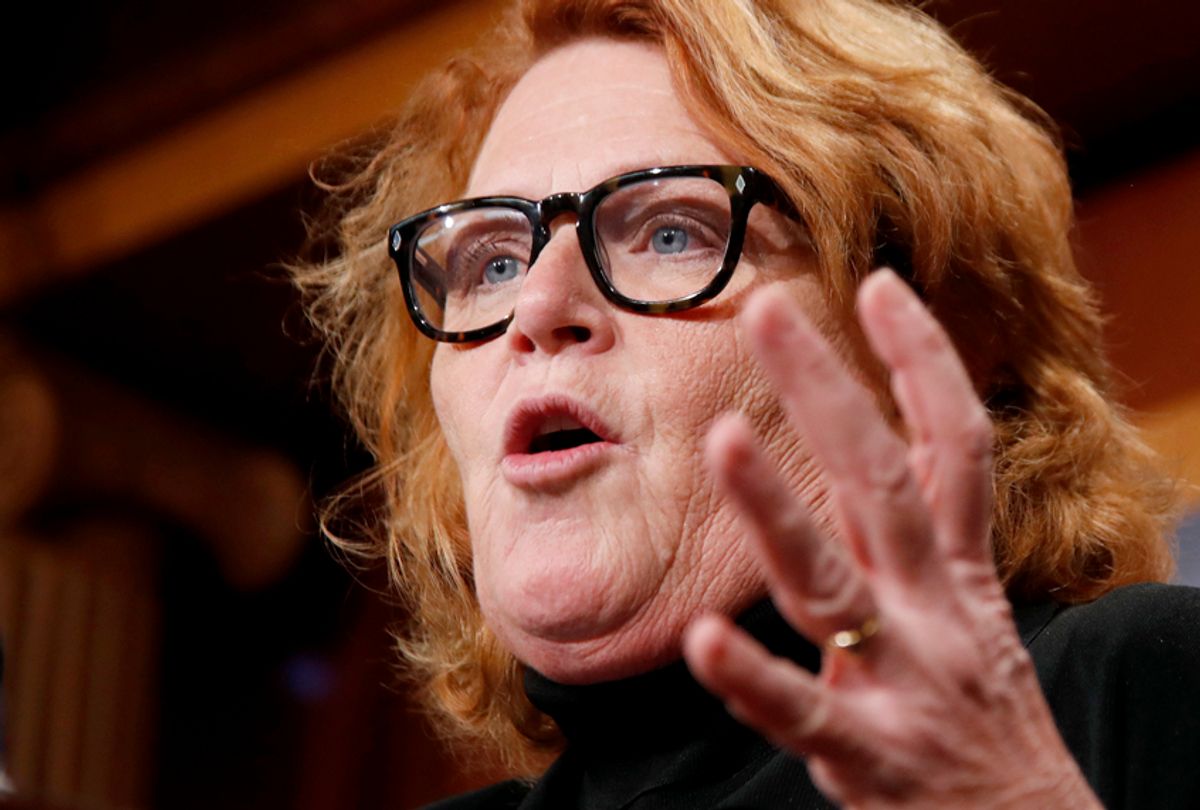 Sen. Heidi Heitkamp (D-N.D.) apologized on Tuesday for including the names of domestic violence and sexual abuse survivors without their consent in a campaign ad aimed at her Republican challenger Kevin Cramer, which was published as an open letter Sunday in North Dakota newspapers.

Heitkamp also revealed Wednesday that the staffer responsible for collecting victims' names for the ad has left her campaign. She did not specify whether the staff member was fired or resigned.

"Sexual assault is a serious crime – and one that too many North Dakota women have experienced," Heitkamp wrote in a statement. "In an attempt to bring awareness to this issue and push back against dismissive comments toward sexual assault survivors by Kevin Cramer, our campaign worked with victim advocates to identify women who would be willing to sign the letter or share their story."

"We recently discovered that several of the women’s names who were provided to us did not authorize their names to be shared or were not survivors of abuse," the Democratic senator continued. "I deeply regret this mistake, and we are in the process of issuing a retraction, personally apologizing to each of the people impacted by this and taking the necessary steps to ensure this never happens again."

Heitkamp is in the thick of an intense re-election race in a red state and coming off the heels of voting against the confirmation of President Donald Trump's Supreme Court nominee Brett Kavanaugh, who was accused by multiple women of sexual assault. While Heitkamp has extended her support and belief to women and survivors, Cramer has criticized the #MeToo movement and painted the incumbent as too liberal for North Dakota. Cramer is up by a margin of 8.7 percentage points in the current Real Clear Politics average.

Heitkamp's team did not offer details on how the error came about, although several women who were listed in the ad have spoken out about their inclusion.

In a Facebook post on Monday, Eve Lancaster wrote, "To whom ever decided it was ok to put my name in this 'open letter' for the Bismarck Tribune and possibly other newspapers for this Heitkamp campaign for sexual harrassment [sic], I am DISGUSTED. I did not give any sort of permission for you to put my name in this. I’m FURIOUS."

In the comments of Lancaster's post, several other women also saw their names listed in the ad and said they had not given Heitkamp permission to name or identify them.

Another woman, Lexi Zhorela, whose name was included without her authorization, told The Associated Press that was "furious" after she learned of the ad Monday. "I know I’m not the only woman hurt by this," she said.

"I have only shared my story with a couple of people in confidence," Zhorela added. "I didn’t want it blasted for the world to see."

Zhorela told the AP that she suspected she was listed in the ad, because she had been tagged in a Facebook post by a friend who knew of her sexual assault. Her statement aligns with one of the comments on Lancaster's post from Alexandria Mcwilliams, who said she created a post about the ad and tagged "most of the women on Facebook in it, and they must have just took those names."

In a Facebook post written on Oct. 9, Mcwilliams highlighted Cramer's dismissive comments about survivors of sexual violence and explained that, in response, women in North Dakota were circulating a letter that would be published in local newspapers and were seeking survivors of domestic violence or sexual misconduct to sign it.

"I have no idea why half of these names are on here," Mcwilliams wrote on Lancaster's post. "I didn’t not expect this to happen just by tagging y’all in a post!"

Zhorela said that, while she had planned to vote for Heitkamp on Nov. 6, she would "definitely not now."

Cramer, who voted to confirm Kavanaugh and described the #MeToo movement as a "this movement toward victimization," told the AP that Heitkamp's ad was a "revictimization of victims."

"This is what happens when desperate people do things for their own personal political gain," he continued. "She proved a point that her personal politics matter more than someone’s personal pain."