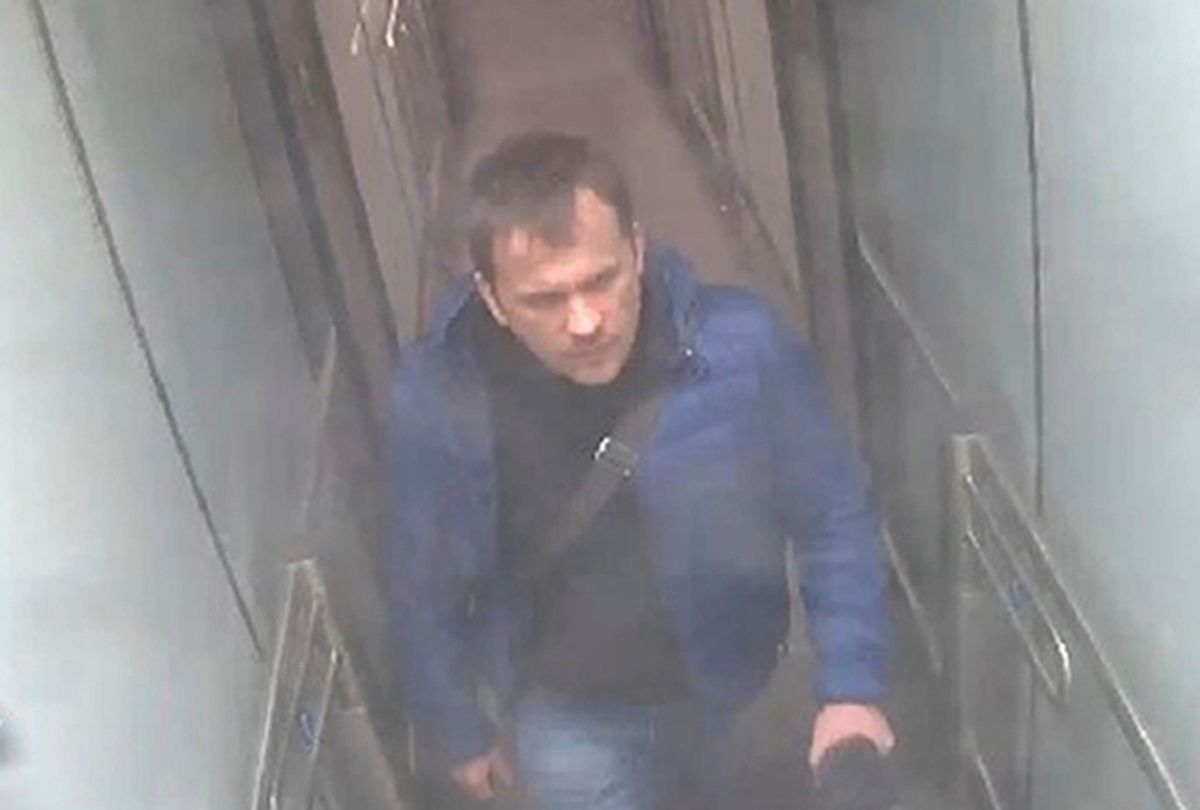 Handout CCTV image issued by the Metropolitan Police of Russian National Alexander Petrov at Gatwick airport at on March 2 2018. The CPS has issued European Arrest Warrants for the extradition of Ruslan Boshirov and Petrov in connection with the Novichok poisoning attack on Sergei Skripal and his daughter Yulia in March. (AP/Metropolitan Police/PA Wir)
--

The story, first reported by Bellingcat, the crowd-sourced investigative site, and the Insider, a Moscow-based news site, has now been confirmed.

AP reporter Nataliya Vasilyeva went to Mishkin’s hometown and discovered it was true.

“Several residents of this remote hamlet located amid marshlands and deep forests in Russia’s northwestern Arkhangelsk region easily recognized him in photos Wednesday as one of two men accused by British officials of poisoning a former Russian spy.”

The Mishkin story is a tale of geopolitical intrigue. In early September, the British government charged that two Russian men, “Alexander Petrov” and “Ruslan Boshirov,” were involved in the poisoning of Sergei Skripal, a turncoat Russian intelligence officer living in Salisbury, England. British officials produced CCTV footage of the two men in Salisbury.

The two accused spies turned up in Moscow a few days later. In an “exclusive interview” with RT editor in chief Margarita Simonyan, the two men were so wooden in their explanations of why they visited Salisbury that it was hard not to be suspicious.

In certain sectors of the left, Bellingcat is controversial. When the Intercept held a journalists’ training session with Bellingcat recently, the editors were scolded by the citizen activists of Mint Press for associating with a “war propaganda firm.”

Bellingcat, said Mint Press, is in league with Western intelligence agencies and has promoted an interventionist U.S. foreign policy, with its reporting from Ukraine and Syria.

So, it’s fair to ask: Is the Mishkin story more Cold War II propaganda, an effort to gin up hostility to Russia by the Atlantic Council, a pro-NATO think tank, which sponsors Eliot Higgins?

Or does the Mishkin story lend credence to the notion that the Putin government seeks to assassinate enemies who take refuge in other countries, just as the Saudi regime apparently murdered a leading critic last week in Turkey, and, for that matter, just as the United States assassinates it jihadist enemies with drones on an industrial scale?

The best way to answer those questions is to examine the quality of Bellingcat’s reporting, and not just in the case of Mishkin.

Bellingcat, founded by British blogger Eliot Higgins, boasts of using “open source and social media investigation to investigate a variety of subjects, from Mexican drug lords to conflicts being fought across the world.”

Higgins is controversial. He is prone to profane outbursts on Twitter. More problematically, he works as a non-resident fellow at the Atlantic Council, a Washington think tank funded by the government of Saudi Arabia, among others. (An Atlantic Council spokesperson said Higgins is supported but not paid by the Council.) As investigative reporter Ken Silverstein pointed out in 2013, the Atlantic Council’s funders tend to get wet kisses in the organization’s policy recommendations.

Someone asked me on Twitter, “Will Bellingcat investigate the disappearance of Khashoggi?” (Jamal Khashoggi is the Washington Post contributor and regime critic who disappeared in the Saudi consulate in Istanbul last week.)

I put the question to Bellingcat in London. They replied, “We already have.”

As for the charge that the Bellingcat is “a war propaganda firm,” the spokesperson said, “It’s a fairly typical response from individuals and organisations who have run out of real arguments.”

The criticism of Bellingcat originated with Higgins’ work on the downing of Malaysia Airlines Flight MH17 over Ukraine in 2014. Supporters of the Russian government hated Bellingcat’s findings, but their conclusions were consistent with the report of the Dutch Safety Board: that a missile fired from a Russian-made anti-aircraft battery in Russian-controlled territory destroyed the plane and killed its 298 passengers.

Bellingcat’s reporting on the use of chemical weapons in the Syrian civil war also drew fire, especially on the first and largest chemical attack, which killed an estimated 1,500 people in the Damascus district of Ghouta in August 2013. When U.S. policymakers threatened to attack Syria, defenders of the Assad regime charged the chemical attack had been staged to justify U.S. intervention. Bellingcat found otherwise.

Let me start by saying, my reporting on the U.S. regime-change operation in Nicaragua in the 1980s makes me skeptical of all government claims about Syria or any other nation targeted by U.S. policymakers. Historically, there is every reason to believe Western intelligence services and other anti-Assad forces would resort to “false flag” operations to achieve their goals.

But no credible evidence of a false flag attack emerged. Richard Lloyd and MIT emeritus professor Theodore Postol authored a January 2014 paper that disputed the U.S. government’s claim that the Syrian government was responsible. They offered no evidence that another party was behind the attack, only speculated that it was possible.

Lloyd and Postol disputed the range of the munitions. They said they could have been manufactured in Syria. They did not dispute the OPCW’s finding that sarin gas was used. The Syrian government is the only party to the war known to possess sarin.

In sum, the weight of the evidence from independent sources supported Bellingcat’s findings.

The coverage of the British government’s charges against “Alexander Petrov” and “Ruslan Boshirov” in September provide another test of Bellingcat’s credibility.

A succession of stories on Bellingcat and the Insider followed the suspects’ RT interview. The first stories asserted that “Petrov” and “Boshirov” were likely not their real names; that their phone numbers and addresses seemed to be associated with a Moscow neighborhood where the GRU, the Russian military intelligence service, has offices. Building on the evidence they had uncovered, they then reported the men’s real names were Alexander Mishkin and Anatoliy Chepiga, that Chepiga is a colonel and that both had received the Hero of Russia medal.

The detail was impressive, but how could a reader be sure? The sourcing was opaque. While Bellingcat and the Insider reproduced many documents online, they also cited “leaked databases,” which sounds like a euphemism for stolen data purchased on the dark web. Other sources were anonymous. The Russian government denied the allegations. So there was room for doubt.

Then the Associated Press sent a reporter to Mishkin’s hometown. The suspected assassin seen in photographs of “Alexander Petrov” was the man they knew as Alexander Mishkin. Multiple residents said the same thing. Mishkin was a local boy who made good by winning an important medal.

And so one important strand of Bellingcat’s reporting is confirmed, proving that a GRU officer visited Salisbury on the day a critic of Putin’s was poisoned.

Bellingcat’s scoop doesn’t resolve the debate about Russia’s role in the world and in American politics. It doesn’t justify Cold War II. Bellingcat merely established an important fact that governments in Moscow and Washington did not care to disclose. Which is the journalists’ job.