Analysis: Brian Kemp has purged over 300,000 voters from Georgia rolls 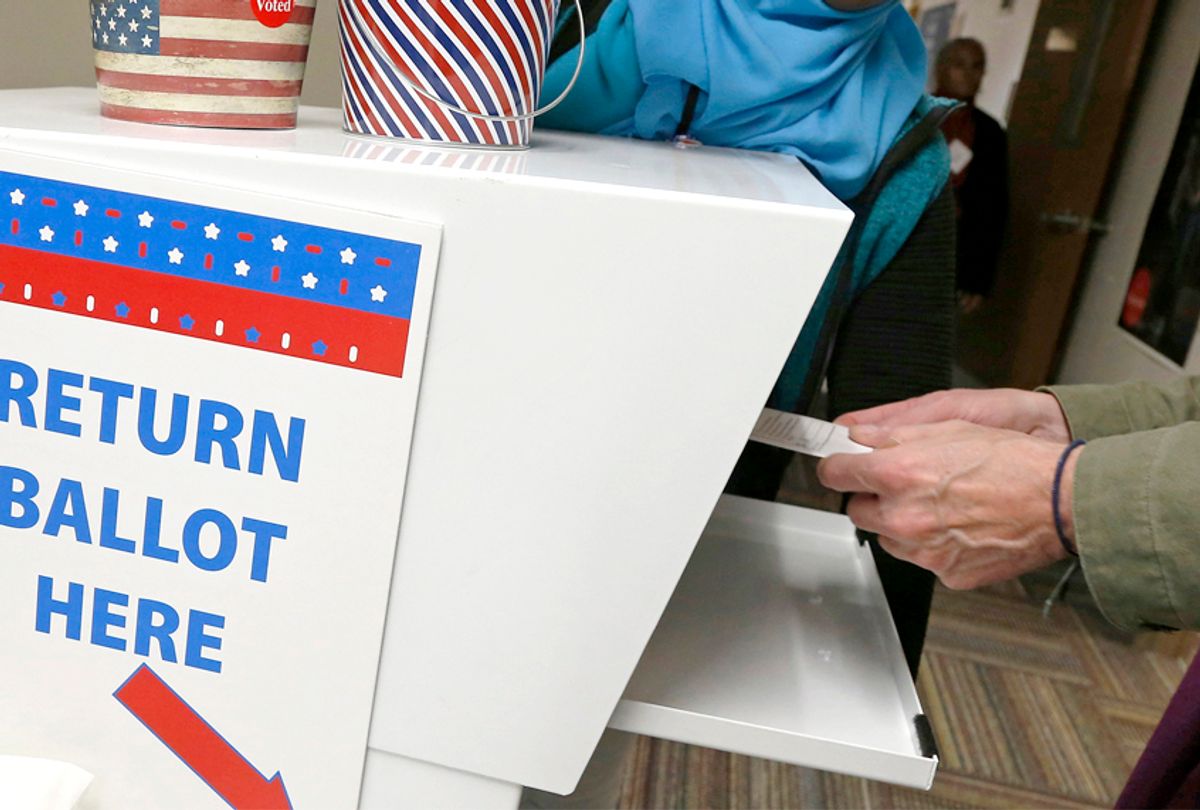 Georgia has removed over 300,000 voters from the state's voter rolls over the past two years, a team of database experts, statisticians, lawyers and investigators working with the Palast Investigative Fund told reports on a call Friday morning.

Greg Palast, director of the Palast Investigative Fund, and the Georgia Coalition for the People's Agenda have joined to file a lawsuit against Georgia Secretary of State Brian Kemp, the state's top elections official who is vying to become the Peach State's next governor. The suit demands that Kemp release his voter registration files to the public to "settle the matter."

The investigation has accused Kemp of wrongly removing hundreds of thousands of legitimate voters from the state's voter rolls because they allegedly "left the state" or "moved from their congressional district." According to Palast, they haven't moved anywhere. While purging 300,000 people from the voter rolls may seem like a small number in a state with a population of 10.4 million, elections have been decided by far smaller margins. As an example, Donald Trump won the 2016 presidential election by a combined margin of 77,744 votes in three battleground states — Wisconsin, Michigan and Pennsylvania.

Earlier this month, Palast rolled out a website to tell Georgia voters if they were purged from the voting rolls. Voters can type in their name and find out if their constitutional right was stripped away from them.

Kemp's office denied the accusation. In a statement to Salon, Kemp's press secretary Candice Broce said, "This lawsuit has no merit. To be crystal clear, Georgia has never used data from the Crosscheck Program to conduct list maintenance in any capacity. Zero voters have been removed from the rolls based on Crosscheck data in this state. Greg Palast is completely blind to this indisputable fact in his pursuit of a sensational headline. Real journalists have already reported that Georgia does not use this data for list maintenance. Frankly, Mr. Palast should be embarrassed, and any credibility that he had left is completely destroyed."

Palast's accusation is the latest to claim that Kemp's office used a questionable verification law to suppress the vote in Georgia. Earlier this week, Georgia officials were accused of voter suppression after they forced dozens of African-American senior citizens off a bus taking them to vote. The bus, which was organized by Black Lives Matter, was set to take about 40 voters from a senior center run by Jefferson County to the polls when the head of the facility told the group they needed to get off.

It also follows a report that Kemp had blocked 53,000 voter registrations – 70 percent of them from African-Americans. The news comes just weeks before Kemp's election against Georgia Democrat Stacey Abrams, who could become the state's first black governor. Kemp used the controversial "exact match" program to purge nearly the voters from the rolls in over the last two years. Under the policy, voter registration applications and their driver's license, social security or state ID records must have identical information. This means that any minor discrepancy, such as a typo, missing hyphen or middle initial could result in a rejection.

Following reports that Kemp's office is using a questionable verification law to suppress the vote in his bid to become the Peach State's next governor, Abrams' campaign called on Kemp to resign as Secretary of State.

"As he has done for years, Brian Kemp is maliciously wielding the power of his office to suppress the vote for political gain and silence the voices of thousands of eligible voters — the majority of them people of color," Abrams spokeswoman Abigail Collazo said in a statement.

Collazo urged Kemp, who is in charge of overseeing his own election, to step down "so that Georgia voters can have confidence that their Secretary of State competently and impartially oversee this election." Georgia Democrats were rejected when they made a similar demand in August.

Kemp's campaign insists that voters whose applications remain in "pending" status have 26 months to fix any issues before their application is removed, and can still cast a provisional ballot. He also said that since January 2014, election officials have processed over 6.4 million voter registrations and less than one percent maintain in pending status.

"While outside agitators disparage this office and falsely attack us, we have kept our head down and remained focused on ensuring secure, accessible, and fair elections for all voters," Kemp said in a statement. "The fact is that it has never been easier to register to vote and get engaged in the electoral process in Georgia, and we are incredibly proud to report this new record."

Kemp and Abrams are in a dead heat, with the most recent polling and analysis predicting a toss-up on Election Day. Republicans have maintained control of the governorship since Democratic Gov. Roy Barnes finished his term in 2003. The current occupant, Gov. Nathan Deal, is currently wrapping his second term and will leave the office in January.

Kemp has previously attacked the New Georgia Project, which was established by Abrahams when she was the Georgia House minority leader in an aim to register over 800,000 people to vote ahead of the 2014 elections. Less than two months before the 2014 midterm elections, Kemp subpoenaed the records of the organization, alleging that the group has committed voter fraud. In a speech to Republican supporters, he mentioned the defunct community-organizing group ACORN and warned that Democrats were relying on "minority voters." At the time, Abrams said that out of 85,000 registrants, the group was aware of roughly 25 complaints about incomplete forms. According to CNN, no claims of misconduct were ever brought directly against the group and Abrams, her campaign said, is no longer involved in its activities.

A coalition of state civil rights groups, including the New Georgia Project, sued Kemp this week over the blocked registrations. Kemp has also come under intense scrutiny from voting rights advocates for removing more than one million "inactive" voters from Georgia’s voting records since becoming the state’s top elections official in 2010. In June, the practice was upheld by a 5-4 Supreme Court ruling, which was part of a larger Republican voter suppression effort, activists told News One.

As CNN notes, "the 'exact match’ system was used by Kemp’s office from 2013 to 2016, during which nearly 35,000 applications were rejected, with voters of color disproportionately affected, according to a lawsuit that was settled in 2017. That agreement seemed to put an end to the practice, but the GOP-held legislature quickly embedded it in new legislation."

Abrams and Democratic groups have accused Kemp of "systematically using his office to suppress votes and tilt the election" and argued that the move disproportionately affects voters of color. In an appearance on "The Daily Show," Abrams called Kemp  "a remarkable architect of voter suppression."