Two weeks before the blue wave: Here are 5 ways the Democrats could still totally blow it

Yep, Democrats will win the House - and conceivably the Senate too. That's actually when the real danger looms 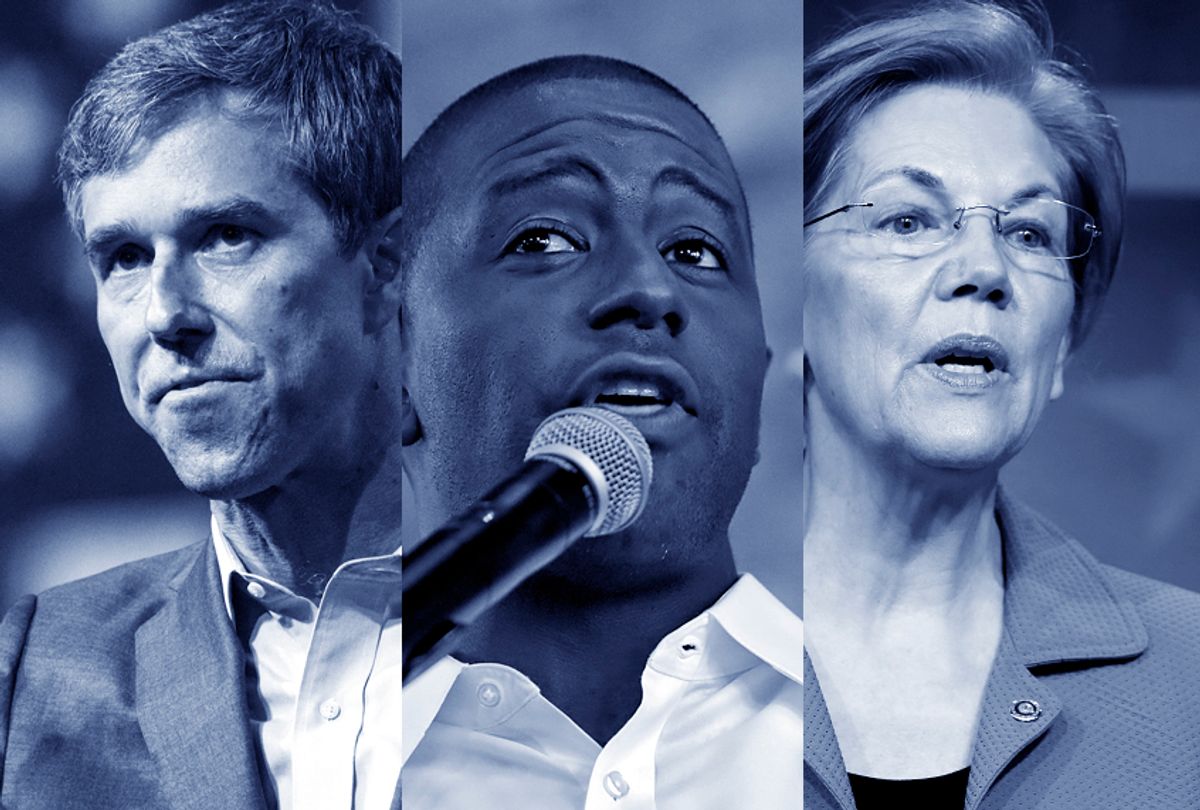 In just over two weeks, the biggest midterm election in my lifetime, and possibly in anybody’s lifetime, will finally reach its decision point. Are you excited or just exhausted? Either way, this is a strange state of affairs. It may be a sign of hope, and it may be a sign of terminal crisis.

In the “normal” rhythms of American politics — which, admittedly, may no longer exist — the midterms are of interest only to political junkies, media soothsayers and disgruntled members of the opposition. Regular people hardly even notice them. I suppose what has changed in the era of President You Know Who is that those first three categories have expanded like an overfed amoeba, and have swallowed all the “regular people.” How many conversations have you had over the last two years that began: “I don’t usually follow politics but …”?

To say that the Democratic Party has a lot riding on this year’s elections may be the understatement of the century. After a full decade of bewildering and demoralizing defeat that has left the party hollowed out from the inside and virtually wiped off the map in most states that don’t touch a large body of water — and after the humiliation of 2016, which had many interlocking causes but at the most fundamental level represented a party with no mission, no soul and no clear sense of purpose — Democrats appear poised for a triumphant comeback. Maybe.

At this point, it would be a massive surprise if Democrats didn’t win a House majority. It’s almost tempting to imagine the aftermath of that devastating outcome, which might be something like an electrical storm in a parched forest. I’m not entirely sure that wouldn’t be the best outcome in the long run, for reasons that may become clear, but I also know that’s overly cold-blooded. In the interests of national mental health and restoring some form of institutional check on His Immensity in the Oval Office, the arrival of the vaunted "blue wave" will no doubt have considerable therapeutic value. The real question is, then what?

I’m on record as predicting that Democrats would pick up 37 to 40 seats in the House (OK, after previously being on record as predicting no blue wave at all), and that’s starting to feel like a low-end estimate. Winning the Senate too is not out of the question, which would have sounded wildly optimistic even three or four months ago. If I had to guess, I’d predict either a 50-50 split (leaving Republicans nominally in control) or a 51-seat Democratic majority.

Here’s how that games out: Rep. Kyrsten Sinema wins the open seat in Arizona and Rep. Jacky Rosen takes Sen. Dean Heller’s seat in Nevada, while Democratic Sen. Heidi Heitkamp goes down to defeat on the frozen prairies of North Dakota, thanks to her “no” vote on Brett Kavanaugh. (Those three events seem more likely than not.) In that scenario, majority control of the Senate comes down to whether former Tennessee Gov. Phil Bredesen, a classic mid-South Republicrat who hopes voters will ignore the D next to his name, can edge out Rep. Marsha Blackburn, a flame-throwing right-winger from the Donald Trump factory of ideas, for the Senate seat being vacated by Bob Corker. (I know, I know, Beto O’Rourke is charming and Ted Cruz is a giant ass: But Texas just isn’t there yet.)

A couple of weeks back I had an invigorating conversation with Ralph Nader, who worried aloud that “the Democrats could blow it again” in 2016. He mostly meant that they’re too cowardly to campaign on a clear commitment to Medicare for All, a $15 minimum wage and other majoritarian issues that might actually attract the attention of lower-income voters who don’t usually bother to show up. Nader is right in the bigger picture, of course, but as he well knows, Democrats are the minimum-risk party, and it seems entirely likely they can win one or both houses of Congress this year without risking any specific promises about anything, other than not being the party of Trumpian corruption, the party of enormous corporate givebacks or the party devoted to destroying coverage for pre-existing conditions.

So I don’t think Democrats will blow it in the next two weeks. That isn't quite enough time, and the Republicans have pretty clearly thrown in the towel. But after that the dangers of blowing it get exponentially higher, fast. Because once the Democrats hold power, at any level, they once again face the party’s classic quandary of recent decades: They have no clear policies or principles in common; they’re not sure who they represent (“sane people” isn’t really a coherent constituency); and as mentioned above they have defined themselves almost entirely in negative terms.

For all the purported infighting between the Hillary Clinton and Bernie Sanders wings of the party (using those two as symbols more than anything else) and despite the handful of emerging insurgents of the Alexandria Ocasio-Cortez model, that quandary is nowhere near a resolution. Maybe it doesn’t have to be: As I’ve written before, the Democratic Party that dominated Congress from World War II into the 1990s was tremendously diverse in ideological terms, and comprised many different warring factions. Even so, it had a much clearer sense of identity than the contemporary version, and that corrupting and damaging void is likely to lead to more Democratic Armageddons ahead, if it can’t be patched and filled.

One could list many more than five ways that the coming Democratic majority of 2019 could screw everything up, re-elect President Drumpf and torpedo its own prospects yet again, allowing the Republicans to regain power as a delusional, all-white minority party built on substandard rural education, the dumbest-ever version of religious fundamentalism and a perverted but sophisticated reading of postmodern epistemology, in which nothing can ever be known for certain and therefore Big Gulps are good for you. But here are the five I see as urgent and pressing dangers. You will notice that they contradict each other. That’s just how it is in America, folks.

It’s extremely trollish of me to list this one first, since it isn’t going to happen. But let’s admit, for the sake of argument, that there’s some hypothetical point on the Ocasio-Cortez spectrum that is too radical for a majoritarian party with a constitutional aversion to class warfare or being perceived as anti-capitalist. But the fear that Democrats will go too pink and drive away “ordinary Americans” has dominated the inner machineries of the party ever since the George McGovern debacle of 1972 (which probably didn’t have much to do with ideology, per se) and became institutional dogma in the Bill Clinton years.

The specter of communism, or socialism, or let’s say mild social-democratic reforms is haunting the Democratic Party — if only in the sense that it leads to endless second-guessing, bottomless cowardice and a widespread tendency to avoid all controversial positions and loudly proclaim one’s patriotism. Democrats fear the Republican attack ads that will accuse them of being commie traitors more than they fear the consequences of the bureaucratic, neoliberal reformism that has left them powerless and without a clear constituency. So even though this isn’t a real danger, it’s still dangerous. If that makes sense.

Since this is clearly what will happen, and moreover offers the most obvious path for a Democratic candidate to unseat Trump in 2020, I’m not even sure I should speak out against it. But in this political climate, avoiding all the obvious traps and simply trying to act dignified and judicious is also a trap. Democrats will face the kind of situation they hate, and at which they are terrible: With a congressional majority they will be guaranteed to piss off some of the voters who got them there. The default setting is to avoid pissing off the Notional Suburban Women and the big-league corporate donors. Since those two groups are not necessarily in alignment this time around, even that modest goal will be tough to execute. Which leads us to …

Most of this is under the radar so far, but some activists on the left are all set to push hard for impeachment proceedings in the new Congress. This one’s dangerous no matter which way you slice it. It’s possible, though not likely, that serious public hearings in the House would reveal abuses shocking enough that Republican support for Trump would finally start to crumble and he might be forced from office. (Leaving President Mike Pence, who is definitely the booby prize.) Remember that even in the most optimistic version of the 2019 Senate, at least 14 or 15 Republican votes would be required to convict Trump in an impeachment trial, a scenario that is up there with having your winning lottery ticket eaten by a shark that is then struck by lightning.

It’s also possible that an extended impeachment process is Donald Trump’s best hope for re-election. The Democratic Party’s way, of course, is to appear to do something while really doing nothing, which might be wise in this instance.

I think this sounds awful, and I hope the phrases turn to ash in Chuck Schumer’s mouth while he utters them. (That's a sensation he must be used to by now.) But let’s say this: In terms of pure political self-interest, this course of action makes a lot of sense. In terms of a moral imperative, the future of our nation and redeeming the soul of the Democratic Party, such as it is — well, a lot less so. Democratic leaders will have to do a difficult dance here, essentially telling their most revved-up supporters, as Salon’s Amanda Marcotte has suggested, that, yes, this dude is a national emergency and we’ll investigate the crap out of him, but impeachment is a foolish distraction; and yes, we want health care for everybody and when we get a real president again we’ll get right on that. I’m trying to construct an argument in favor of this course of action, and I can feel my faith withering away as I write.

Um. Do I even need to elaborate on this one? Because this forecast is just true until proven false. I can’t tell yet whether Sen. Elizabeth Warren has definitively torpedoed her own status as “media frontrunner” for 2020 — as opposed to actual frontrunner, who sadly enough is still Biden — with the whole irrelevant DNA business about her Native American ancestry. But the fact that we’re discussing that, more than a year before the Iowa caucuses, and even before the goddamn midterms, is debilitating.

To sum up: Will Democrats win this year? Probably. (By the way: If they don’t, it’s not because I wrote a snarky article and everybody got overconfident.) Will they find a way to blow all their political capital and destroy this moment of unanimity? Absolutely. Can that damage be repaired in time to save the republic? I’m sorry; the magic 8-ball is done answering questions for the week.