Andrew Gillum goes there in debate against Ron DeSantis: "The racists believe he’s a racist" 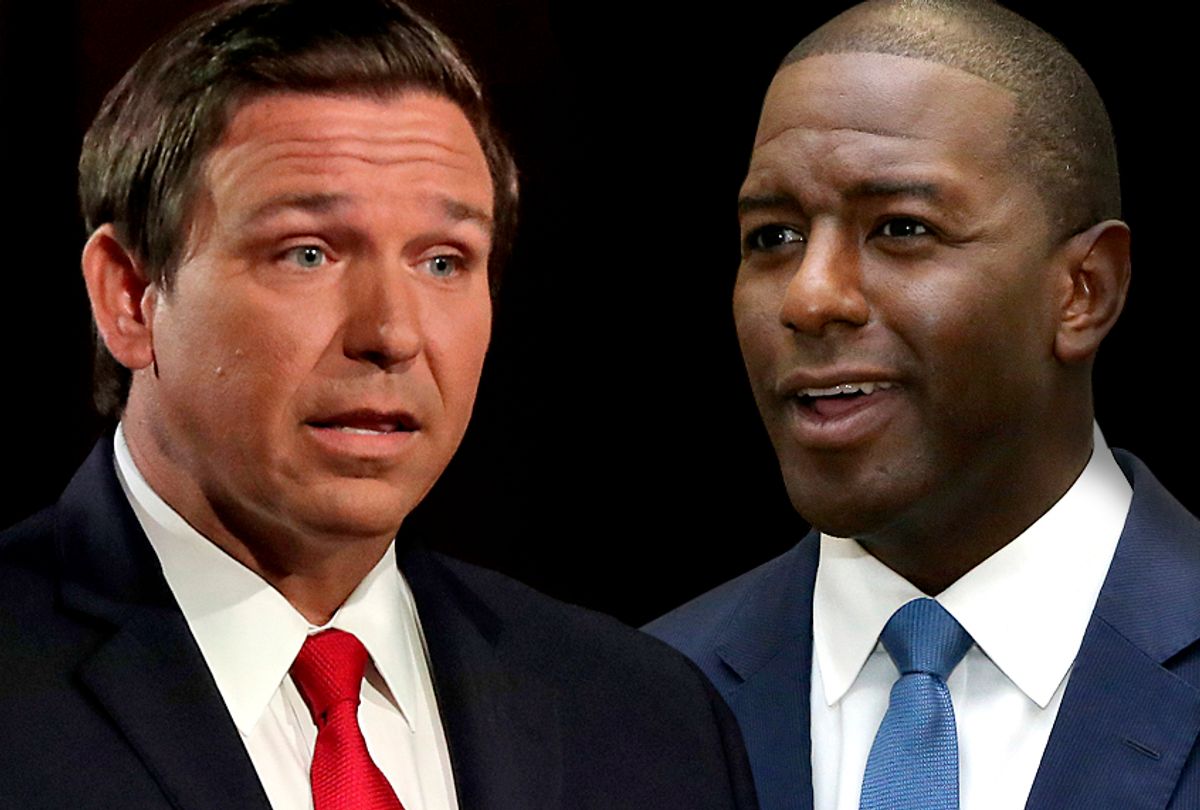 A televised debate for the Florida governor's race on Wednesday night became heated as Democratic candidate Andrew Gillum accused Republican candidate Ron DeSantis of racism, while DeSantis drew attention to new information about a potential ethics scandal in Gillum's past.

Perhaps the most noteworthy moment of the debate occurred when Gillum, who serves as mayor of Tallahassee, reacted to an answer by DeSantis in which the congressman claimed it wasn't fair to accuse him of racism because he had spoken at far right conferences and one of his campaign contributors had used a racial slur against Gillum.

"How the hell am I supposed to know every single statement somebody makes? I am not going to bow down to the altar of political correctness," DeSantis exclaimed, according to The New York Times. Gillum replied by quoting his grandmother, who used to say "‘A hit dog will holler,’ and it hollered through this room." After spelling out the racial slur that DeSantis's donor had used about Gillum, the Tallahassee mayor pointed out that "I’m not calling Mr. DeSantis a racist. I’m simply saying the racists believe he’s a racist."

DeSantis responded by going on the offensive against Gillum, saying that "I am not going to sit here and take this nonsense from a guy like Andrew Gillum who always plays the victim, who’s going out and attacking and aligning himself with groups who attack our men and women in law enforcement, attack our military."

DeSantis also raised questions about Gillum having allegedly accepted an unethical gift in the form of Broadway tickets from undercover FBI agents posing as lobbyists.

"I arrived at the theater and received the ticket from my brother," Gillum explained during the debate before adding that "I should have asked more questions to make sure that everything that had transpired was above board." DeSantis responded that if Gillum is innocent, he should be more transparent about what happened.

"Get all the evidence and statements out there so the voters of Florida can know everything is on the up-and-up," DeSantis told Gillum. In response, Gillum argued that DeSantis should release more information about the $145,000 plus he spent on taxpayer-funded trips to New York City.

"Where is the evidence of where you went and how our money was spent to be a junket for you to go to New York and hang out in ‘Faux News and Friends’?" Gillum told DeSantis.

The New York Times also reported that passions were so inflamed that they continued to flare after the debate:

Tensions were so high that after the debate, representatives from each campaign broke into a shouting match before a gaggle of television cameras.

Representative Matt Gaetz, a Republican, called Mr. Gillum a liar and accused him of “playing the race card.” He told the former Miami Beach Mayor Philip Levine that he would have beat Mr. Gillum in the Democratic primary if the revelations about the “Hamilton” tickets had come out earlier.

“We’re confident in the character debate,” he said.