Whatever rote condemnations Trump offers, it was inevitable that he'd use the bombs as an intimidation tactic 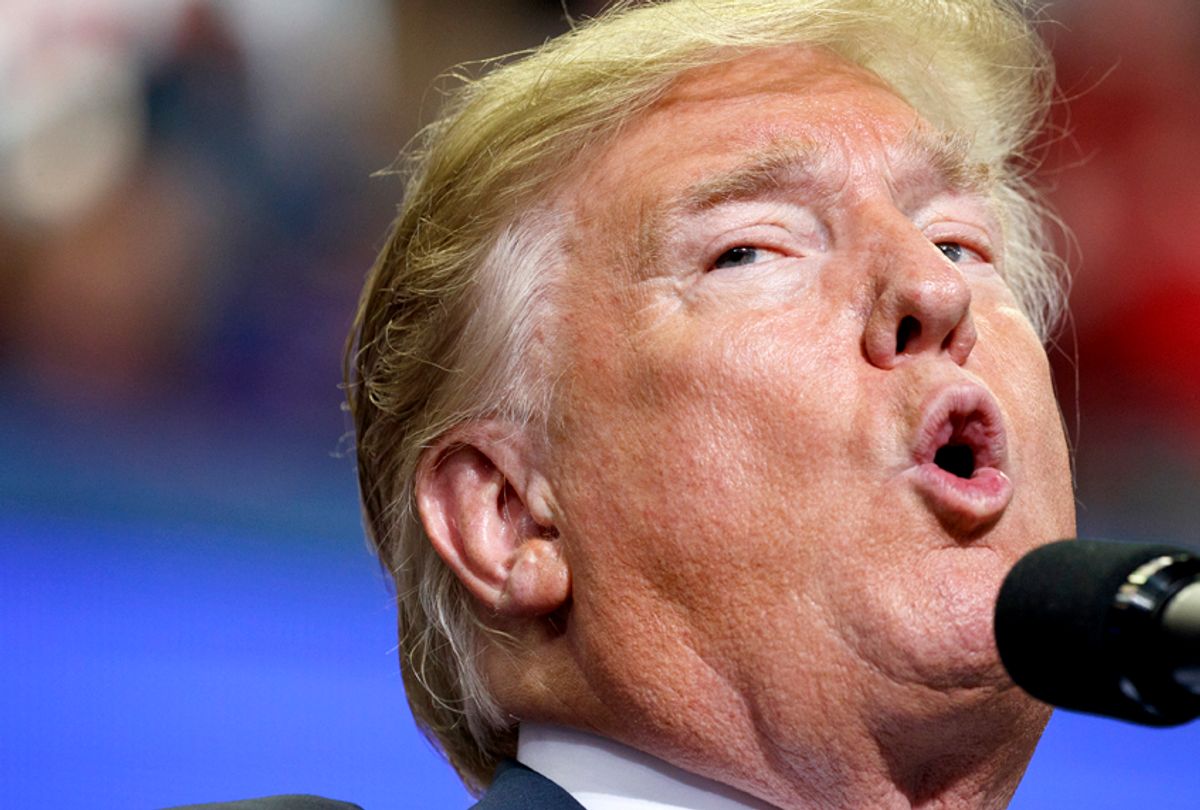 The question on Wednesday was not whether Donald Trump would cover for or encourage the domestic terrorist who has been sending bombs to frequent targets of Trump ire, ranging from CNN to Barack Obama to Robert De Niro. Trump is a malignant narcissist who instinctively sides with anyone he thinks admires him, and this bomber clearly seems to be a fan. Plus, as the past couple of weeks have demonstrated — Trump has issued reluctant condemnations of the murder of Washington Post journalist Jamal Khashoggi, while obviously trying to find some way to protect the Saudi crown prince from being held accountable — Trump won't draw the line at murder, when it comes to winking at behavior that he perceives as beneficial to himself.

Sadly, the only real question was how: What line would Trump pursue in order to minimize the seriousness of this situation and how far would he go in signaling approval to the terrorist or terrorists who are sending or planting that these devices? Would he run with a conspiracy theory that was swiftly gaining traction with the likes of Ann Coulter and Rush Limbaugh, holding that the bombs were "false flags" planted by liberals? Or would he use the strategy embraced by Sean Hannity and Meghan McCain, drawing an equivalence between attempted murder and public protest or the public confrontation of prominent Republicans? (Those last are legal free-speech activities, even if conservative pundits and Trump invariably call such protests "mobs.")

Unsurprisingly, after Trump sullenly read a scripted condemnation of the bombing at the White House earlier Wednesday, he landed on a strategy that both minimizes the seriousness of the situation and encourages the bomber: Blaming the victims.

During a rally in Mosinee, Wisconsin, on Wednesday night, in which the crowd cheerfully chanted "lock her up" — a call to imprison Hillary Clinton, one of the bombing targets — Trump exploited the bombing to push his argument that he should be shielded from criticism and should be able to censor unflattering news reports.

Yes, the president also offered banal denunciations of violence, saying that "acts or threats of political violence are an attack on our democracy" and that we should not tolerate "violence or the threat of violence as a method of political intimidation, coercion or control."

After that boilerplate text, written by a speechwriter who was clearly indifferent to making it sound like Trump's own voice, the president moved onto his real message, which is that the best way to achieve the "unity" that stops the violence is for liberals and journalists to censor themselves and fall in line with the right-wing agenda.

He proposed that "the media also has a responsibility to set a civil tone and to stop the endless hostility and constant negative and oftentimes false attacks and stories" — with "false" being well-known Trumpian code for "stories that are true but are not flattering to the president."

He then declaimed about liberal "mobs," which became the standard right-wing characterization of peaceful protest after the Brett Kavanaugh hearings, and called on people to "stop treating political opponents as being morally defective." OK, but the only possible reading of that is that liberals should stop treating opponents that way, because he clearly has no plans to stop doing that himself. He also complained about those who "compare political opponents to historical villains," which, again, was clearly aimed at critics on the left and not, say, his alt-right supporters who glowingly compare Trump to former Chilean dictator Augusto Pinochet.

Then he finished up by saying, "By the way, do you see how nice I’m behaving tonight?"

This is typical Trump rhetoric, reassuring his followers that whenever he takes a ritual timeout to condemn racism or violence, it's only because the mysterious forces of "political correctness" are making him do it, and his words should not be seen as indicative of his true feelings.

Sure enough, by Thursday morning, Trump returned to Twitter and doubled down on the blame-the-victim strategy, tweeting that "the Anger we see today in our society" is due to "the purposely false and inaccurate reporting of the Mainstream Media that I refer to as Fake News."

It is not hysterical or overblown to point out that this argument is functionally an endorsement of the bombing. Trump is deliberately using the bomber and the fear he inspires in an effort to intimidate the media into abandoning journalism in favor of propaganda and pro-Trump flattery.

This escalation was entirely predictable, since this is how Trump handles these kinds of controversies. Washington Post opinion writer Paul Waldman laid out the pattern in a Thursday tweet:

Now Trump's approach is unsurprisingly being reinforced on Fox News, with multiple pundits blaming the media and the left and framing the bomber as someone whose motivations are justified, even as they claim to denounce his methods. The idea is solidifying, at least in right-wing groupthink, that liberals and journalists should respond to terrorism by giving the terrorists what they want. This is no different than the logic of the wife-beater who tells his wife that he doesn't want to hit her, but if she can't get dinner on the table in time, then he clearly has no choice.

That's why any language about national unity or "coming together" coming from conservatives -- still less from Donald Trump -- should be treated with skepticism. Trump's idea of unity is not one where there's some terrain for reasonable compromise, or a genuine effort to argue out differences in an atmosphere of mutual respect. It's one where he can do what he wants and everyone else achieves "unity" by lying down and letting him have his way. This is why he feels free to keep on flinging false accusations at the media and calling them names, even after decrying that behavior. Clearly, "civility" is just code for "Liberals and journalists: Shut up."

Is it shocking to see Trump, and conservatives generally, instrumentalize terrorist violence this way? It shouldn't be. This pattern has defined the Republican response to decades of violence against abortion clinics: Officially condemn the people who commit it, but refuse to take effective action to reduce or control the violence. That way, they have have it both ways, by pretending to be civil while also benefiting from the way such terrorism has drastically reduced the availability of legal abortion.

Of course it's unpleasant to imagine that the president of the United States doesn't care about these attempted bombings and may even see them as a net positive, since he can use them to threaten his enemies. So there will be a lot of tiptoeing around and downplaying the seriousness of this situation, in which the person who is supposed to be our national leader basically implies that victims of possible terrorist attacks pretty much had it coming. But that kind of denial is a big reason why things have gotten this bad. If we have any hope of saving the country from this ongoing disaster of a presidency, it will require more journalists and leaders to be clear-eyed and honest about how Donald Trump's behavior encourages violence, and justifies it when it happens.