It's time for NBC to fire Megyn Kelly

In the wake of backlash to her blackface comments, her agency has cut ties. Time for NBC to follow suit 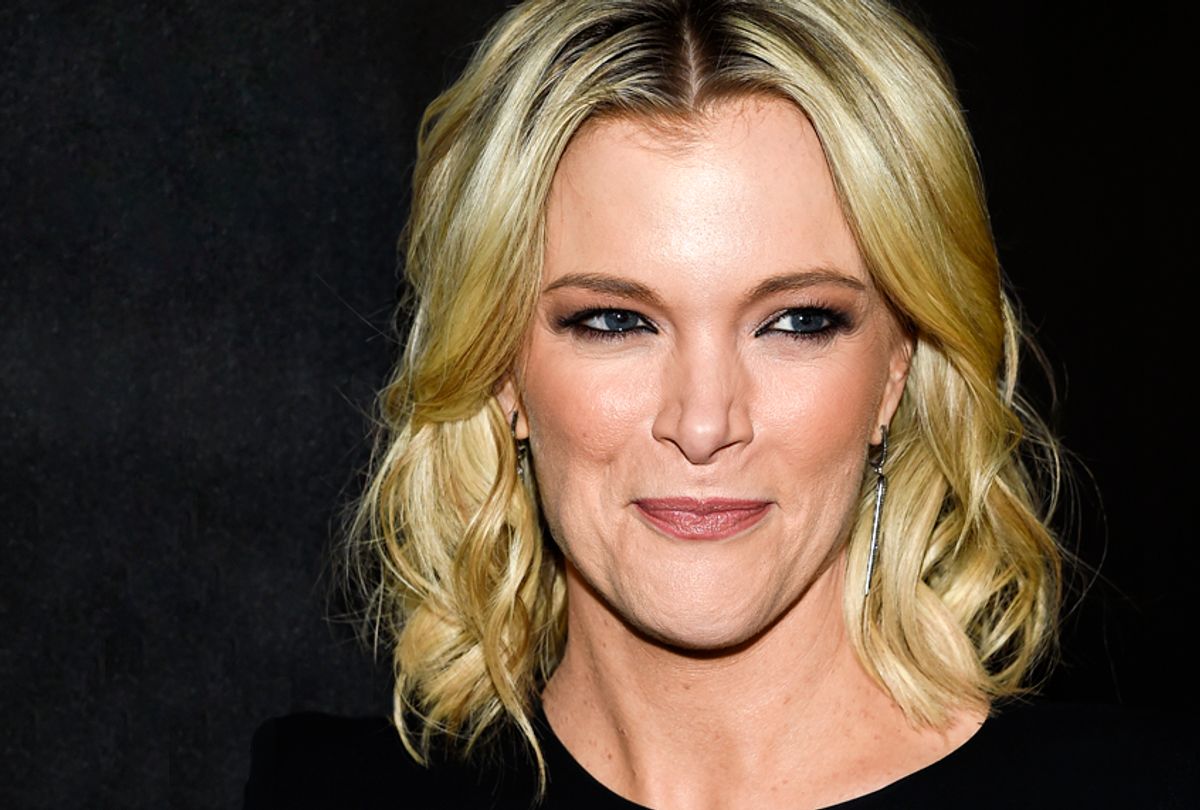 I’m not sure if Megyn Kelly, NBC’s host of "Megyn Kelly Today," lives in a cave without wifi, isn’t a real journalist, doesn’t read books, has never heard of Google, is trying to secure her Fox News roots in time for the midterms, or all of the above, but apparently in 2018, during one of the most racially sensitive times in the history of our country, where Black people are literally being executed on film by cops who are rarely held accountable, she thinks dressing up in blackface is fine.

Kelly's roundtable discussion on Tuesday with Melissa Rivers, Jacob Soboroff and Jenna Bush Hager addressed racially offensive Halloween costumes and the debate around political correctness. Even before blackface entered their conversation, Kelly strangely seemed annoyed at the fact that many people think, for example, if you aren't Native American or Mexican, dressing up as a Native American or a Mexican for Halloween is offensive. The studio audience loudly applauded her stance.

Kelly went on share her feelings on the backlash that Luann de Lesseps, a cast member of “The Real Housewives of New York,” faced when she appeared on RHONY in April in a Diana Ross costume.

“She dressed as Diana Ross, and she made her skin look darker than it really is,” Kelly said. “And people said that that was racist. And I don’t know, I felt like, who doesn’t love Diana Ross?”

Couldn’t have de Lesseps dressed up as Diana Ross without darkening her skin? (I dressed up like Superman as a kid and easily pulled it off without makeup.) Soboroff pushed back, saying that de Lesseps' costume “sounds a little racist to me.” And he’s correct. It is 2018 and we are still explaining the same things to same people who refuse to understand for the same reasons.

And like always in these cases where public figures are forced to walk back toxic racist speech and actions, Kelly followed the basic steps: a BS apology, which always sounds more like, “I’m not sorry that I said it, I’m sorry that you heard me say it" or even "I’m sorry that I embarrassed the network who pays me millions,” followed by hosting special Negro guests on Wednesday — in this case, Roland Martin and Amy Holmes — to teach her right from wrong.

“I realize now that such behavior is indeed wrong, and I am sorry,” Kelly wrote to her colleagues in an email Monday. “The history of blackface in our culture is abhorrent; the wounds too deep. I’ve never been a ‘pc’ kind of person — but I understand that we do need to be more sensitive in this day and age.”

"I want to begin with two words, ‘I'm sorry.’ You may have heard that yesterday we had a conversation about political correctness and Halloween costumes . . . I defended the idea (of blackface), saying that as long it was respectful and part of a Halloween costume, that it seemed OK. Well, I was wrong, and I am sorry."

Kelly is 47 years old, and the fact that she has one of the biggest platforms in the country and yet apparently doesn't understand the decades of public shame, humiliation and pain hand-delivered by white people to Native Americans, Mexicans and Black Americans is disgusting, and nowhere near quirky or funny. And this isn't new behavior from her, either. Back in 2013 on her Fox News show "The Kelly File," the anchor scoffed at the idea that Santa Claus could be portrayed as anyone but a white man. "Just because it makes you feel uncomfortable doesn't mean it has to change."

"Jesus was a white man, too. It's like we have, he's a historical figure that's a verifiable fact, as is Santa, I just want kids to know that," she said. "How do you revise it in the middle of the legacy in the story and change Santa from white to black?"

“We are in total denial about how deeply embedded race is in the DNA of America. There are lines. There’s history. There’s pain,” explained Martin. “As long as Americans live in denial and pretend this stuff does not matter we will continue to have this problem.”

I’d like go a little deeper, for the good of Megyn Kelly and the world in general.

One reason why it's not funny or cute to dress up as Native Americans is because their land was stolen by colonizers (who we still call heroes like Andrew Jackson) implementing the Indian Removal Act, where they were forced into foreign places, exposed to diseases like whooping cough, typhus, dysentery, cholera, and starved during their journey, not to mention separated from their families. Close to 7,500 Cherokee died on the Trail of Tears alone.

And it’s not cool to play dress-up as Mexicans while our current President remains proud of implementing policies that separate migrant children from their parents, while calling good people thieves and rapists. I can’t speak for Mexicans, but I’m sure they won’t find it funny.

It’s not cool to dress in blackface, either. As Frederick Douglass once said, blackface performers are, "the filthy scum of white society, who have stolen from us a complexion denied them by nature, in which to make money, and pander to the corrupt taste of their white fellow citizens."

Historically, blackface has been used to demonize and humiliate black people at the highest level, using the stereotypes of blackface to reinforce bigotry and convince white Americans as a whole to think less of us so they won't care about our ongoing oppression. Those same stereotypes associated with blackface that Kelly thought were cool are still aiding the mindsets that get black people discriminated against, jailed and even murdered to this day.

Is Megyn Kelly capable of understanding all of this? Or will she forever be blinded by her privilege? On day one of this story, she discussed blackface with a table full of white people, completely ignoring the value of any black perspectives. On day two she offered a public apology, and invited two African Americans who almost never get to be on morning shows to educate her and her audience. That's privilege as well: Not involving black people in a regular Tuesday discussion of the holidays, but keeping them on standby, just in case some racially offensive drama unfolds.

CNN reports that Kelly's departure from her morning show "appears to be imminent," but she is still scheduled to provide coverage during the upcoming midterm elections, and could land another role with a different focus elsewhere in NBC's lineup.

I think NBC has an opportunity here to get out on top of this story and just let her go. Her $23 million a year salary is double what her predecessors Tamron Hall and Al Roker received — combined — and according to Vanity Fair Kelly's ratings are down 18 percent, and still dropping. Mega-talent agency CAA just parted ways with Kelly, but they gave no comment on why and whether their decision relates to the blackface controversy. But a further split between Kelly and the network may be in the works — CAA also represents NBC News president Noah Oppenheim.

The fact remains that there are scores of brilliant, talented, experienced women broadcasters who aren't racist and who could easily take Kelly's spot. If NBC keeps her, it will expose how badly the network wants to make a cheap play for the Santa-and-Jesus-are-white MAGA crowd.