Donald Trump won't give up his iPhone: Who's he talking to, and who's listening? 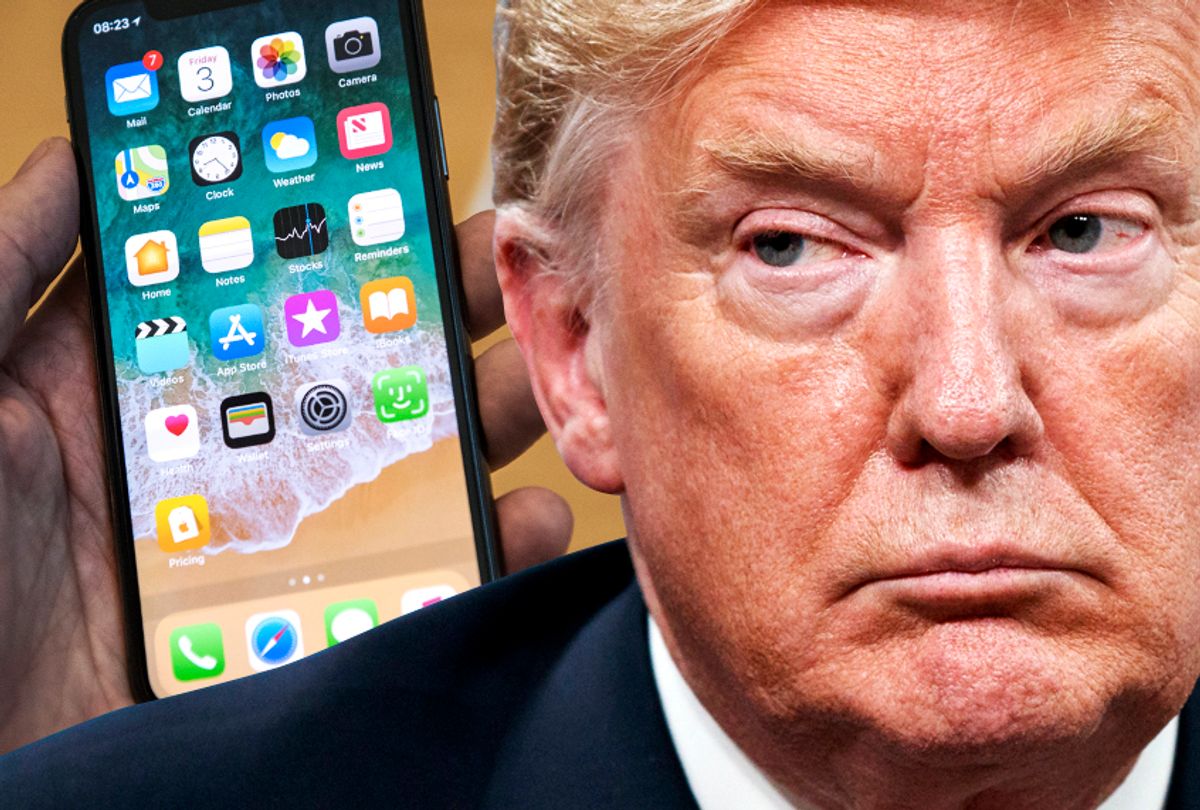 I'm sure most Americans woke up on Thursday and were startled to find that President Trump had been unable to maintain even the tepid level of concern he'd shown the night before about the attempted assassination of important figures on his enemies list. He got cutesy in his Wisconsin rally on Wednesday evening, blandly reciting words about unity and then saying the media was responsible for the attacks for reporting on what a flaming train-wreck he and his administration are. He repeatedly smirked and called attention to the fact that he wasn't calling the bombing targets "low-IQ" or "crooked." As he put it, he was being "nice" which made his followers laugh. They knew he didn't mean it.

Still, a major bomb threat against former presidents and other political figures is of such serious magnitude that one might have thought even Trump could go 24 hours without reverting to his usual reckless incitement. He couldn't. And it wasn't because he's focused like a laser on the election, which one might have expected. After all, this event had interrupted his "Caravan Invasion" storyline, which was no doubt disappointing.

No, what got Trump out of his temporary "nice" mode was a story in the New York Times on Wednesday night reporting that the U.S. intelligence community was beside itself because Trump was still gabbing on his unsecured iPhone and they had proof that Chinese and Russian government agents were listening in. Furthermore, the Times reported that Trump's staff has warned him over and over that his calls are not secure and he simply refuses to give up his phone. All his staff can hope for is that he isn't sharing any classified or sensitive information.

This story had Trump raving. His first tweet of the day, early in the morning, was this:

You can tell he was burning up about this because he came back to it three hours later:

In between, he tweeted about how the media had caused all the anger in our culture by being negative about him.

He posted those tweets from his iPhone.

There are numerous accounts of Trump's unwillingness to give up his personal cell phone, going back to the beginning of his administration. Last April, as John Kelly was widely reported to be losing influence and the president was understood to be acting as his own chief of staff, CNN reported that Trump had gone back to more frequent use of his personal iPhone after having cut back for a short time. (To adhere to security protocols, Kelly prefers the president to use secure landlines.)

I won't go into the rank hypocrisy of the man who won the White House by calling his rival "crooked" for using a personal email server -- a non-crime for which his followers still lustily call for her to be imprisoned. (They even did it on the day it was revealed she had been targeted for assassination.) Nor is it worthwhile to point out that Republicans apparently have no problem with any of this either, despite their hysteria over Clinton's emails. Calling out these people for hypocrisy and double standards is a waste of breath. After all, in their alternate universe Trump is the real victim of the assassination attempts.

But it is useful to examine what this episode says about Trump's personal relationships and his lackadaisical attitude toward national security. According to NBC News, Trump likes to get on his cell phone and chatter to a wide array of informal advisers, perhaps most prominently Sean Hannity of Fox News. Government officials have been concerned for months that he's sharing sensitive information during these calls. Of course he is. He's the most indiscreet president in history.

According to the Times, the Chinese have pieced together a list of Trump buddies with business interests in China, whom they then find ways to influence. That article even names a couple: "Stephen A. Schwarzman, the Blackstone Group chief executive who has endowed a master’s program at Tsinghua University in Beijing, and Steve Wynn, the former Las Vegas casino magnate who used to own a lucrative property in Macau."

It's fair to assume that one of the main reasons Trump is so upset about this story is the fact that his buddies have been exposed as well. Trump isn't easily embarrassed (and I assume he'll get over this one in no time) but these people can't be happy about this. They almost certainly assumed that the most secure telephone conversation in the world would be talking to the president of the United States.

One can't help but also wonder if Trump ever discusses his own business interests when he's chatting on the phone. It seems unlikely that he doesn't. He's still fully invested in all his foreign properties and it would be out of character for him not to discuss how well they're all doing with his business pals.

Whether or not it's true that Chinese agents know Trump's current thinking about his own business and financial interests, they certainly have heard his thinking about them. Trump has said many times that he won't discuss his strategy publicly because it would take away the element of surprise. I guess the surprise is on him.

Perhaps the most interesting aspect of that report is the fact that the Russian government is also spying on the president but according to the Times the Russians haven't put as much effort into it, because of Trump's warm relationship with Vladimir Putin. Still, aides have told him repeatedly that Russia is listening to his calls, and Trump apparently doesn't care. I guess he and Vlad have no secrets.

That, by the way, may explain why this story was leaked the way it was. The Times went to some length to explain that its sources weren't trying to undermine the president, but were just frustrated that he continues to refuse to communicate in a secure fashion. That's why they made it clear that it was the Chinese bogeymen who were listening in, and were working his friends on the business side. That got his attention.

Theresa Payton, who was George W. Bush's chief White House information officer and is now CEO of a security firm, told Fast Company, “If true, this may be the largest, most significant breach of White House communications in history.” I'm sure Trump will be thrilled to hear it. He loves to be "the largest" and "most significant," no matter what the category is.