As Trump slashes environmental regulations, the EPA union forms the crux of an internal resistance 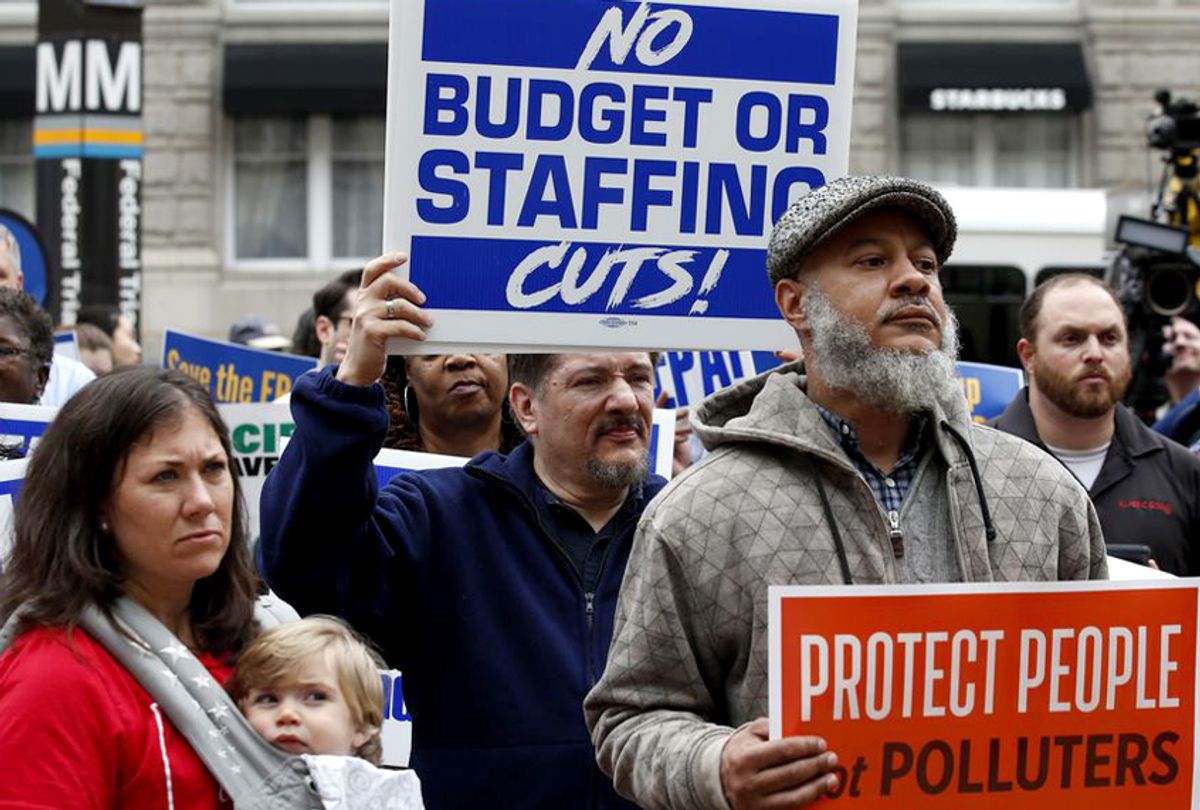 Protesters listen to speakers talk about EPA Administrator Scott Pruitt and the state of the EPA during a protest by the American Federation of Government Employees union, Wednesday, April 25, 2018, in Washington. (AP/Alex Brandon)
--

For all of the horrifying policies being implemented by President Donald Trump, perhaps the most terrifying prospect is the potential for his climate change attitudes to bring about to the destruction of life on Earth as we know it. As the president works to deregulate businesses so that they can more easily pollute and makes it more difficult for legitimate science to be used to shape public policy, a precedent has been established that will ultimately cost lives. Even worse, because Trump denies man-made global warming and pulled the United States out of the Paris climate accord, he may have set the planet on a long-term path toward destruction.

Yet in order for any Trump administration policy to become real, it must be enacted by the public federal employees who manage the bureaucracy. Many federal government employees are represented by unions, specifically by the American Federation of Government Employees (AFGE). Because of their potential to organize collectively, unions have historically been bastions of fomenting social change and slowing the institutional gears of the institutions they represent. Environmental Protection Agency (EPA) employees are represented by AFGE, and as the Trump Administration works to hasten climate change, the union and the employees it represents have proven to be a source of dissent within the administration — even a major source of resistance to the world-destroying agenda Trump is perpetuating.

To discuss the disastrous impact of Trump's environmental policies and the union's work to fight back, Salon corresponded by email with Mike Mikulka, President of the American Federation of Government Employees Local 704, which is based in Chicago. This interview has been condensed and edited for print.

What are AFGE's thoughts on the impending expiration of the public comment period for passing the Affordable Clean Energy rule and replacing the Clean Power Plan?

AFGE supports the request of the many groups that have asked for an extension to the October 31, 2018 deadline to submit comments. A sixty to ninety day extension seems reasonable, especially considering the numerous regulatory rollback proposals the Agency has put forth. AFGE was not supportive of EPA's decision to hold only one public hearing (October 1, 2018 in Chicago) on the Agency's so-called Affordable Clean Energy Rule. Even the name is deceptive (in more ways than one) since the rule is anything but affordable when you consider that the EPA mission is to protect human health and the environment. Rules proposed by EPA should be designed to protect human health and the environment, whereas this proposal puts Americans at greater risk for premature death, more asthma attacks, cardiovascular damage, developmental and reproductive harm, and an increased risk of cancer. Further, the rule is not clean, when you consider its main objective, rather than pollution control, seems to be the continued use of coal as a predominant energy source in this country. The CPP was projected to reduce emissions of sulfur dioxide by 90% and nitrogen oxides by 72%, whereas ACE is only expected to reduce such emissions by 2%. Not very clean.

Do you agree with Dr. Ruth Etzel when she says that, under Trump, the attitude of the EPA is that "kids are disposable?"

Dr. Etzel is the epitome of a federal employee who should be allowed to serve the public without political interference. Since EPA dismissed her, she has been coerced about her life’s work and intimidated about whom she may communicate with. AFGE would rather judge the actions of the EPA. For example, the actions of the EPA on the rollback of the Clean Power Plan (CPP) would seem to show less regard for human life than one should expect from EPA, whose mission is to protect human health and the environment. The benefits of the CPP were estimated by EPA to be saving 3,600 premature deaths, 1,700 heart attacks, 90,000 asthma attacks and 300,000 missed work and school days per year. Those benefits will not be achieved under ACE, and EPA even admits more deaths can be expected. Wow! Certainly some of those will be children. The cost of that is estimated by EPA to be avoided compliance costs of $6.4 billion. When did EPA start trading lives for dollars?

What real-world consequences have ensued as a result of the appointment of Science Advisory Board members who reject mainstream science, particularly on issues like man-made climate change and pollution?

We will have to wait and see on that one. The appointments to the Board of researchers who question mainstream climate science and have actively opposed life-saving regulations is not a good sign.

What can be done to make the EPA more responsible to the environment and the American people?

This Administration would have the public believe that pollution is good and government life-saving regulations are bad. Nothing could be further from the truth. The bulk of the American public supports the mission of the EPA and the life-saving regulations that have been put in place. The current direction seems to have veered off the tracks and seems bent on supporting corporate interests over public interests. In spite of opinions to the contrary, corporations are not persons and are beholden to their shareholders for profits, not environmental protection. That is the mission of the EPA: to protect human health and the environment. So, to make EPA more responsible to the environment and the American people, return to the mission that the Agency was established to perform. Get back on that track. If a regulation does not protect human health and the environment, don't propose it under a deceptive name to try and fool the public into believing it is something that is good for Americans. That's not good government.