After terror comes the media BS: No, lazy pundits, "both sides" don't do this

It was a week that shocked America. Whatever talking heads and Republicans may claim, the responsibility is clear 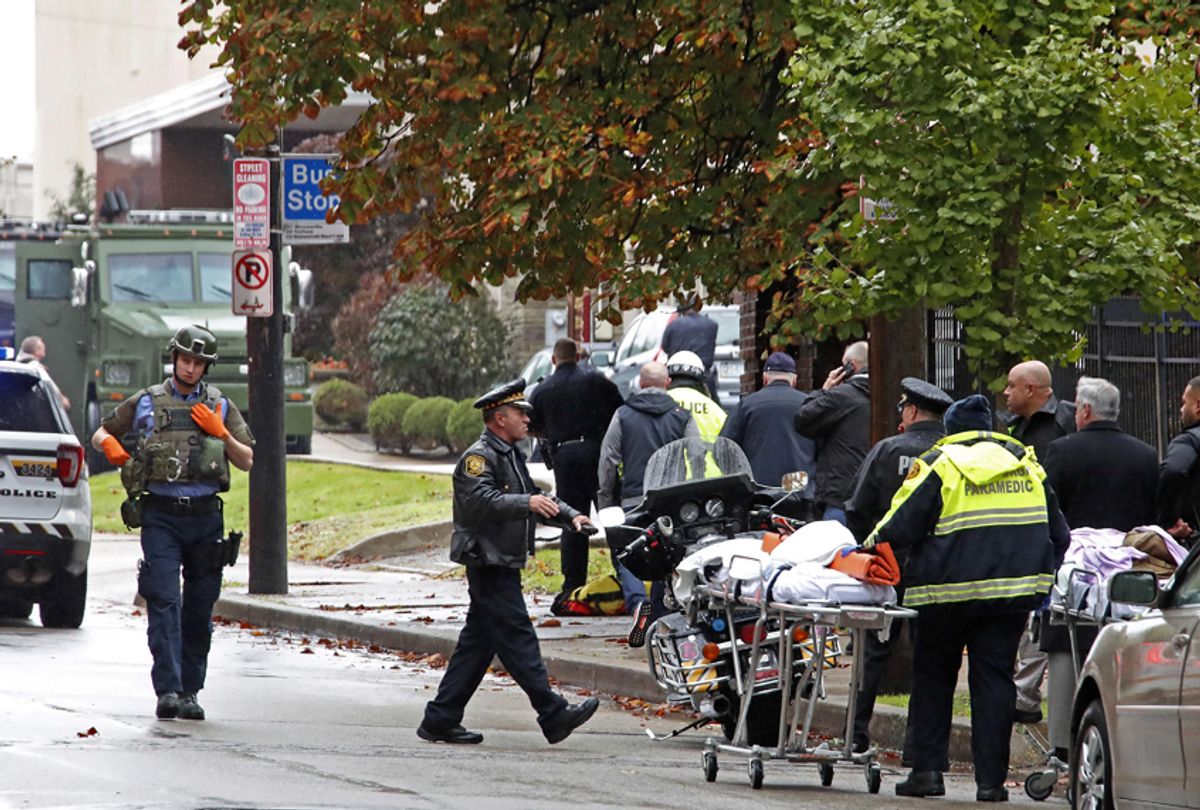 In the aftermath of at least a dozen attempted assassinations and one brutal hate crime in Pittsburgh, the Sunday shows were a conga-line of both-sides-ism this past weekend. Predictably, this appears to be metastasizing into the dominant D.C. media analysis of our harrowing political discourse, and it’s difficult to say which is worse: the wrongness or the laziness of it. The roster of self-identified political analysts on television isn’t an underpaid group, yet their diagnoses of what’s wrong with our politics couldn’t be more facile.

Guest after guest claimed that both sides are responsible for acts of violence and the eliminationist rhetoric that sparks those acts. It’s a profoundly simplistic view, coming from people who ought to know better. The idea, apparently, is that both left and right are encouraging political violence, and therefore both sides are equally responsible when it happens.

To put it another way, are we to believe the murders and attempted assassinations are generally the same as -- well, as what? Stephen Miller being denied chips-and-salsa by anti-Trump protesters? Are we supposed to just accept as fact that Rep. Maxine Waters’ “push back” blurt is the same as the president repeatedly urging his disciples to “knock the crap” out of liberals while demonizing his critics as the “enemies of the people” nearly every day?

To repeat the obvious: The president is on record using eliminationist rhetoric hundreds of times, and he continues to get away with it while the press, the group that’s allegedly “so unfair” to Trump, is actually taking some of the burden of guilt off his narrow shoulders. To call this madness greatly understates the crisis.

For decades, the Republican Party has attacked the press for an alleged liberal bias. It’s a strategy that has successfully led to a degree of infuriating capitulation among the television news media. Unless a false sense of balance is manufactured by TV news, Republicans will continue to attack the integrity of the press, thus impacting the ratings and, with those ratings, the all-important ad revenue fueling the for-profit television industry.

But TV news outlets have gone one step further by overcompensating -- by presenting lopsidedly conservative panel discussions and the like, while continuing to lean heavily on the “both sides” toggle. In the absence of a realistic view of this crisis, we have no choice but to set the record straight. For a complete understanding of how this series of confrontations began, we only need to review the near-term record of the faction that absolutely started this particular eliminationist fire.

We can't discuss public confrontations without discussing conservative anti-choice activists who have verbally threatened and physically assaulted women nearly every day of the week since the Roe v. Wade decision was handed down. Couple this with Fox News and talk-radio screechers like Bill O'Reilly encouraging violence against abortion doctors such as "Dr. Tiller the Baby Killer," and it's kind of a miracle that more women haven't been killed. CNN reported:

For years, abortion providers have been targeted on a spectrum of aggressiveness. The National Abortion Federation reports more than 176,000 instances of picketing at clinics (and nearly 34,000 arrests) since 1977. It has documented more than 16,000 reported cases of hate mail or harassing phone calls, over 1,500 acts of vandalism and 400 death threats.

There have been more than 200 bombings and arson attacks at facilities that offer abortion services, the organization reports.

It wasn't Democrats or anti-fascist protesters who chose to pilot a car into a crowd of protesters in Charlottesville, Virginia on that fateful day in August 2017, killing Heather Heyer and injuring a handful of other people. And it wasn't a Democratic president who praised the driver's white supremacist co-conspirators by insisting that at least some of them were "very fine people" just hours after the attack.

Unlike the Democrats, Republican rhetoric has encouraged the dangerously misguided notion that deadly violence is the only way to solve problems. In particular, if there's a piece of legislation that's bugging us, the best solution is to, y'know, shoot it.

While we’re here, how many Republican politicians have called for "Second Amendment remedies" or included crosshairs with photos of Democrats? Since 2008 alone, dozens. Again, good luck searching for an equivalent series of videos by liberal U.S. senators and candidates. By the way, random people on Twitter aren’t on the same level as, say, Sen. Rand Paul of Kentucky, who once tweeted this:

Back in 2010, when Republicans were fluffing their base in preparation for the midterms, the eliminationism was especially ripe. Via ThinkProgress:

Rep. Steve King (R-IA) held up a picture of Speaker Nancy Pelosi (D-CA) for the crowd, mocking it and “slapping” it. Throughout the day, the tea party protesters accosted Democratic members of Congress with racial and homophobic slurs, and one protester even spat on Rep. Emanuel Cleaver (D-MO).

Steve King, again: "If I could start a country with a bunch of people it would be the folks standing out here the last few days. Let’s hope we don’t have to do that. Let’s beat that other side to a pulp. Let’s take them out, let’s chase them down."

Our president, in his own words

It’s never redundant to say this: Donald Trump himself has, without the slightest sense of irony, attacked Democrats for being “evil” and an "angry mob" despite his ongoing s**tshow of knee-jerk threats and his repeated calls for violence -- and despite the fact that he personally called for an end to “the politics of personal destruction.” It was an empty declaration given how he followed that remark by ridiculing CNN, Sen. Elizabeth Warren, and various others in the same speech.

Trump has personally insulted, mocked and demagogued every political leader on the MAGAbomber’s hit list. He continues to attack those leaders today, even in the wake of the assassination attempts against them, adding personal insult to injury. Among many other remarks, Trump tweeted this on Sunday while pundits were exchanging “both sides” takes on "Meet the Press":

Authorities intercepted a bomb sent by Cesar Sayoc to Steyer less than 48 hours before Trump tweeted this. No matter how much the “both sides” people dig for it, there is no equivalent of this tweet delivered by any Democratic president, or any other Democratic A-lister, for that matter.

I dare anyone of any political stripe to find quotes like these from a Democratic leader:

Compared with, say, Maxine Waters, it’s more than obvious that the president’s bully pulpit is louder, his reach is broader and his level of influence is significantly greater than nearly any other political leader in the world. Knowing this, he deserves to be held to a higher standard than citizen activists or even elected Democrats on Capitol Hill. He’s the president. Presidents are supposed to set an example of ascetic bravery and stoicism in the face of ceaseless and often negative reporting. Trump, on the other hand, expects us to feel sorry for the (alleged) billionaire president whose party controls all three branches of government because the press is mean to him. Again, boo-hoo.

Meanwhile, Trump will never end his own politics of personal destruction. Indeed, the only thing he’s concerned about is shaming and intimidating the press into leaving him alone. It doesn’t take much by way of observation to recognize the fact that Trump wants his critics in the media to stop reporting on his criminality, his incompetence and, especially, his belligerence on the stump.

This is precisely why Trump is so reluctant to hold himself accountable for his routine attacks, including the ones he’s delivered moments after condemning that sort of thing. Trump is trolling the world, and the buck stops with him. Period. Unless, that is, we’re elevating everyone -- Maxine Waters, Nancy Pelosi, CNN, everyone -- to the same level as the so-called leader of the free world, in which case Trump ought to abdicate some of his power to them. It's strange that Trump’s own supporters are content to drag the presidency down to a lower station of responsibility just to own the libs.

Quite frankly, in a competition over who can be the biggest creeps, the Trumpers will always win, so the best option is not to play. But there is no “both sides” equivalence here. Only one side is being led by the president, with his influence and his bully pulpit, and this president along with his allies continue to encourage violence from posts of unrivaled power. Their condemnations of last week’s would-be assassin and this weekend’s anti-Semitic mass murderer empty when conservative pundits and Republican leaders continue to backstop the president who, even after all that, hasn’t changed a single note of his eliminationism chorus.

There’s one man who can end all this. His name is Donald Trump and no, he won’t stop.