Nope, none of these films are from "The Purge" franchise 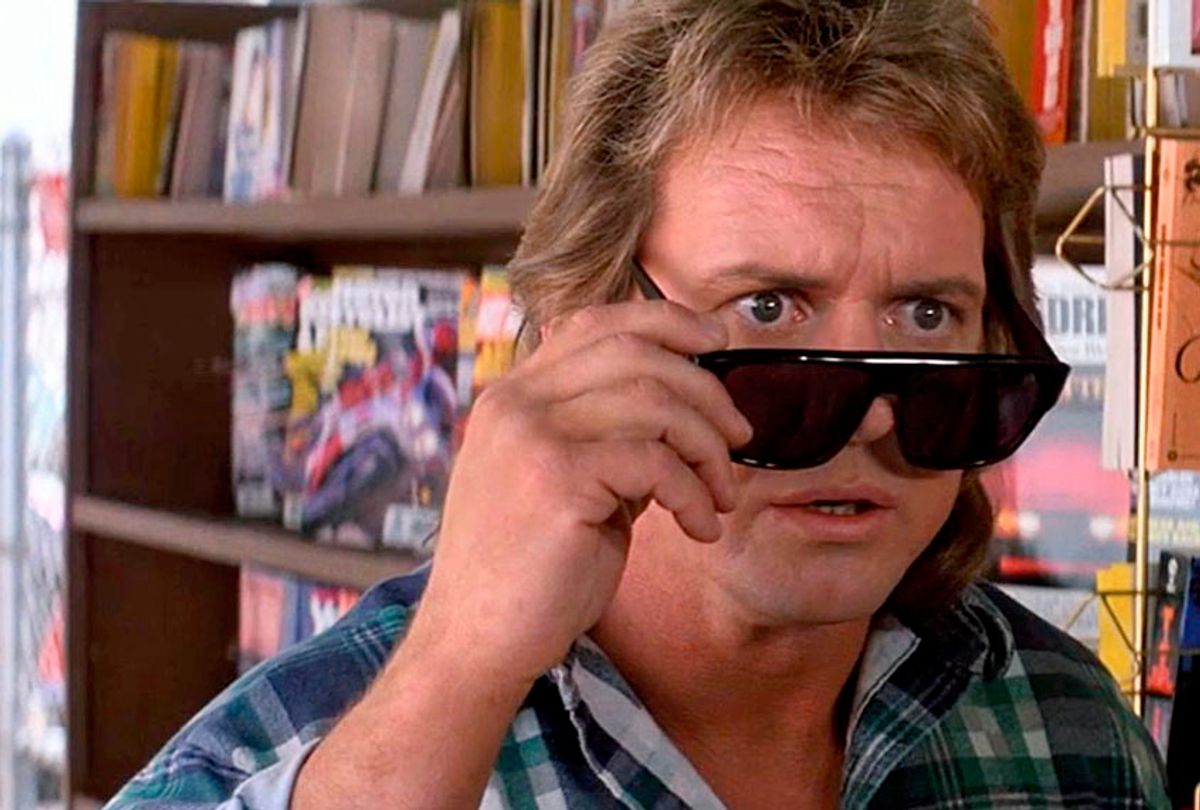 Roddy Piper as John Nada in "They Live" (Alive Films)
--

One of the most common complaints from internet reactionaries is that they are tired of politics creeping into their favorite pop culture products (a point I made in my reviews for "Ghostbusters" and "Star Wars: The Last Jedi"). Aside from the fact that these criticisms are usually a response to specifically progressive politics (or mere inclusiveness) rather than actual overt politicking, the reality is that some of the best genre films work precisely because they contain intelligent, thought-provoking political messages.

As the following list demonstrates, this is particularly true for horror movies. Here are five of the best political horror films.

"I have come here to chew bubblegum and kick ass — and I'm all out of bubblegum."

Most people are familiar with this famous line delivered by John Nada (Roddy Piper) in the John Carpenter film "They Live," but few recall the story in which it was uttered. This 1988 chiller tells the story of a not-too-distant future in which severe income inequality has led to rampant homelessness, with Nada and his friend Frank Armitage (Keith David) struggling to make ends meet as they obtain gigs as construction workers and reside in a nearby shanty town. When Nada stumbles upon a pair of seemingly magic sunglasses, however, he discovers that the entire modern world is actually full of coded messages planted there by extraterrestrial capitalists who pretend to be real humans but only exist to economically exploit us.

What makes this message particularly ingenuous is that it's an alien invasion film in which the villains are driven not to annihilate us or engage in military conquest, but simply to take our money and render us into peons of their capitalist system. It's as if the pod people from "Invasion of the Body Snatchers" only wanted our credit card numbers rather than our actual bodies. Clever trick, Mr. Carpenter.

Warning: This is not an easy movie to watch. It's hard to explain why without spoiling the film's climax, which when you get right down to it is the entire reason why this film was made. Suffice to say that it tells the story of Bill Whitney (Billy Warlock), a privileged young man in Beverly Hills who never feels like he fits in with the rest of his wealthy family even though they have on the surface provided him with everything a '80s youth could ask for: a cool car, social status in his school, a supportive home. Yet Bill can't shake the sense that he is secretly an outcast, a notion that is reinforced when he hears a tape of what sounds like his family participating in a murderous orgy. If the movie was actually building up to some kind of disgusting incest scene, that would be bad enough, but instead the film's stomach-churning climax is actually a powerful (if a tad on-the-nose) metaphor for how the wealthy and powerful exploit those who lack their resources. Once you see where this is all going, you will never forget it.

This film belongs right up there with "Creepshow" and "Trick r' Treat" as one of the all-time great horror anthologies. Each of the five stories in this feature finds creative ways of putting a supernatural twist on real-life horrors like police brutality, child abuse, and the growing power in America of the political right. The most effective story of the bunch is "Hard-Core Convert," which includes a scene of brainwashing torture that gives "A Clockwork Orange" a run for its money. I also have a soft spot for "KKK Comeuppance," a tale clearly inspired by Klan wizard David Duke's nearly-successful campaign for governor of Louisiana in 1991. With a wraparound story led by by the iconic Clarence Williams III as the creepy funeral home director Mr. Simms, you have one of the most memorable and underrated horror classics from the 1990s.

Made by the same studio that produced "Coraline" and "Kubo and the Two Strings," "ParaNorman" has one of the most subtly moving messages of any animated movie. On the surface it has a standard horror premise: Eleven-year-old Norman Babcock (Kodi Smit-McPhee) is socially isolated from his peers at a Massachusetts public school because he claims he can talk to dead people (which, of course, he actually can). When his seemingly deranged great-uncle Mr. Prenderghast (John Goodman) warns Norman that there is a magic ritual he will need to perform to protect the town from an evil witch, the precocious protagonist must recruit his best friend Neil Downe (Tucker Albrizzi), older sister Courtney (Anna Kendrick), local bully Alvin (Christopher Mintz-Plasse) and all-star jock Mitch Downe (Casey Affleck) to help him save the day.

Yet this movie is all about things not being what they initially seem. Since I don't want to spoil the major plot twists, I'll simply explain that the moral of the story is that in life there often aren't straightforward good guys and bad guys; very often the real enemies are fear and emotional pain, which can cause otherwise good people to behave like monsters. This is a message that many adults fail to learn, and "ParaNorman" delivers it in a nuanced way that works organically within the story rather than feeling preachy. As a bonus, it also contains the first openly gay character in a mainstream animated film — and when that individual comes out of the closet, the joke is not about the character's sexual orientation, but rather about another character simply assuming that this person would be straight.

I'll be honest: This list exists because I wanted to write about "Tales from the Hood 2." Like its predecessor, it is an anthology with four main stories and a wraparound piece, with the role of narrator/evil funeral home director Mr. Simms being assumed by Keith David. The tales here cover topics like racial caricatures in popular culture (through a golliwog-based story), the racism of America's prison-industrial complex, the #MeToo movement and (in the only weak story from either film) the dangers of fake psychics.

Yet there is one story in here that is a standout, one that is not only the best from either movie but could have easily worked as its own standalone feature film. "The Sacrifice" tells the story of a black Republican named Henry Bradley (Kendrick Cross) who is about to endorse a gubernatorial candidate in Mississippi whose main platform involves shutting down polling places in African American precincts throughout the state. Before Bradley can follow through on his political maneuvering, however, his pregnant wife (who is white) warns him that the ghost of Emmett Till, the 14-year-old African American who was brutally murdered in segregationist Mississippi in 1955, is going to change the future by refusing to forfeit his life if it turns out that people like Bradley aren't going to respect the sacrifices that he made.

It's a premise that could very easily have been tasteless or offensive, but the execution of "The Sacrifice" is so heartfelt that the story moved me tears. It isn't about sneering at black Republicans (although it's established that Bradley is a conservative, the story's objection to his politics is that he wants to make it harder for other black people to vote) so much as it is about remembering that some privileges exist because others lost their lives. It is a story, like all of those told in "Tales from the Hood 2," that remains painfully relevant today.