How the Google employee walkout could trigger major corporate reform 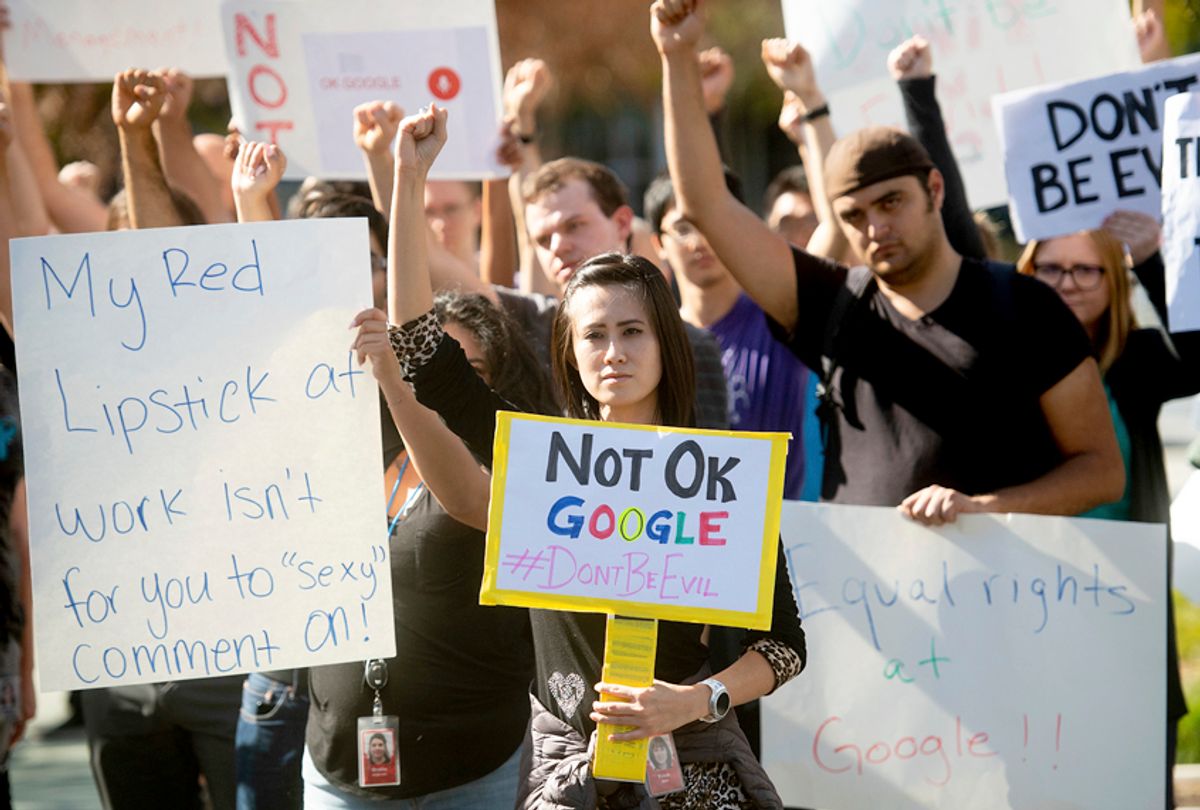 When a report broke last week that a Google executive investigated by the company for sexual assault was awarded a $90 million exit package upon his resignation, many Google employees were understandably furious — and in turn organized a global walkout today, November 1, in protest of the company's actions. One protest sign from the walkout, posted on Twitter by Briana Wallace, epitomizes worker discontent: "What do I do at Google? I work hard every day so the company can afford $90,000,000 payouts to execs who sexually harass my coworkers," it reads.

The walkout protesters were particularly well-organized online — as one might expect from tech workers — and coordinated a Twitter account devoted to the walkout and their grievances, while also issuing a collective unsigned statement listing demands. The protesters' demands are reasonable and progressive accommodations for promoting a civil, harassment-free and equal workplace, and include: the company ending forced arbitration, a legal tactic used to hide harassment cases from public and law enforcement's eyes and silence accusers; promising equal pay; and the appointment of an employee representative to the Board of Directors.

As the employees elucidate in their press release listing demands:

Elevate the Chief Diversity Officer [CDO] to answer directly to the CEO and make recommendations directly to the Board of Directors. In addition, appoint an Employee Representative to the Board. Both the CDO and the Employee Representative should help allocate permanent resources for demands 1-4 and other equity efforts, ensure accountability to these demands, and suggest propose changes when equity goals are not met.

The employee representative demand is somewhat unusual for American corporations, but normal in many other developed countries. Such a progressive proposal is often touted as a means of making companies more democratically run and in-line with their employees' interests. It is also not without precedent: The University of California system has an elected Student Regent on their Board of Regents, who is given voting power on par with the rest of the Regents. Likewise, Germany has a national law that requires employees on corporate boards, a policy known as co-determination.

As a result of co-determination, "German corporate governance is markedly different from the Anglo-American variety, with German companies seemingly placing more weight on worker concerns like job security and less on short-term shareholder value maximization," as Justin Fox wrote in Bloomberg News. Though free market fundamentalists might balk at any whiff of regulation, Fox explains that co-determination doesn't mean that the German economy has suffered; rather, as he writes, "the country’s annualized growth in real per-capita gross domestic product since 1976 (1.8 percent) has been a smidge faster than that of the U.S. (1.7 percent)."

Part of the reason that Australia and European countries' economies did not suffer several decades of rising income inequality and wage stagnation as the United States did was because of progressive corporate governance policies like co-determination, which meant companies shared more profits with workers. George R. Tyler notes in The Globalist that "a healthy byproduct of codetermination has been higher wages, as nations across northern Europe have adopted local variations of the Australian wage determination mechanism, which links wages to rising productivity year after year."

Co-determination is picking up steam in the United States thanks to a recent proposal from Senator Elizabeth Warren (D-Mass.), who in August 2018 introduced a bill that would give workers more of a say on corporate boards. Called the Accountable Capitalism Act, Sen. Warren explained in a Wall Street Journal op-ed that the bill would "restore the idea that giant American corporations should look out for American interests." As she explains:

Corporations with more than $1 billion in annual revenue would be required to get a federal corporate charter. The new charter requires corporate directors to consider the interests of all major corporate stakeholders—not only shareholders—in company decisions. Shareholders could sue if they believed directors weren’t fulfilling those obligations.

[...] My bill also would give workers a stronger voice in corporate decision-making at large companies. Employees would elect at least 40% of directors. At least 75% of directors and shareholders would need to approve before a corporation could make any political expenditures. To address self-serving financial incentives in corporate management, directors and officers would not be allowed to sell company shares within five years of receiving them—or within three years of a company stock buyback.

The "employee representative" demand from Google employees walking out today bears a great deal of similarity to Warren's proposal.

White-collar tech employees like those at Google are in a unique position to influence their corporations' business decisions. Software engineers are in scarce supply, and Silicon Valley knows it can not afford a mass exodus of programmers due to corporate malfeasance. As such, tech companies are under much more pressure to change corporate policy under pressure from employees.

Likewise, most tech companies have long been viewed as having a paternalistic relationship to their white-collar workers, and said companies' HR departments readily pay vast sums for unusually plush benefits (free massages, anyone?). If any industry's employees can precipitate a corporate governance change via internal revolt, it's the tech industry. Ultimately, if employee representation on corporate boards becomes a norm in the US, it could result in better workplace harassment policies, more equal wages, and less income inequality.