Rep. Steve King has lost many major endorsements because of his racist comments, but not from Sen. Ted Cruz 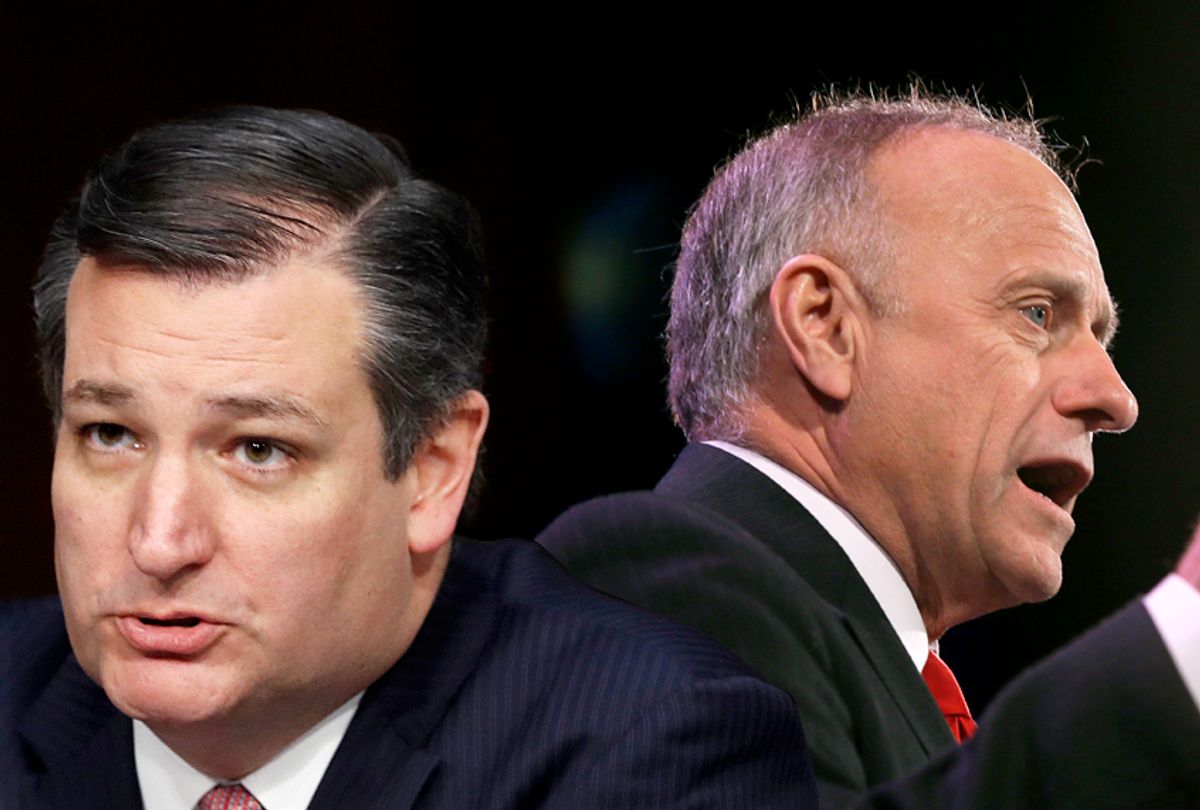 Sen. Ted Cruz, R-Texas, has refused to unequivocally denounce a Republican congressman whose racist comments have recently drawn the condemnation of the chairman of the National Republican Congressional Committee.

"It's disappointing. He's saying and doing things that are dividing us, that are pulling us apart. We need to be finding ways to come together. This is a very polarized time and I do think tone and rhetoric matter. The way you address issues matter," Cruz told reporters after a campaign rally in the Texas community of Midland, according to the Dallas Morning News. Cruz was most likely referring to a decision by Rep. Steve King of Iowa to endorse a white nationalist running for mayor of Toronto, as well as his interview with an Austrian publication associated with the extreme right in which he argued that white Europeans are superior and that a "Great Replacement" of whites with non-whites is currently occurring.

When confronted about these words by King, Cruz simply responded that "I don't know everything he's done and said. I don't think we should be saying things that are divisive." Later King said that Cruz personally called him to emphasize that he would continue to benefit from his support, a call that Cruz's campaign confirmed, according to Bloomberg News:

Representative Steve King of Iowa, who has been abandoned by Republican leaders and donors over his embrace of white nationalists and for rhetoric that has been denounced as racist, said he got a supportive phone call from Senator Ted Cruz of Texas, who’s facing a tough re-election battle of his own.

King, in an interview, said Cruz, a fellow Republican, called him on Wednesday. King co-chaired Cruz’s 2016 presidential campaign in Iowa, the key early caucus state, which the Texan won.

Cruz campaign spokeswoman Catherine Frazier called the conversation “a personal call, and Senator Cruz told him the same thing he said to reporters today,” she said. Cruz was quoted by the Dallas Morning News as calling King’s remarks “disappointing” and divisive but he didn’t condemn the congressman.

While Cruz was ambivalent about his stance toward, Rep. Steve Stivers of Ohio was not, tweeting on Tuesday that "Congressman Steve King's recent comments, actions, and retweets are completely inappropriate. We must stand up against white supremacy and hate in all forms, and I strongly condemn this behavior." King later responded with a tweet in which he said that "these attacks are orchestrated by nasty, desperate, and dishonest fake news media. Their ultimate goal is to flip the House and impeach Donald Trump. Establishment Never Trumpers are complicit."

King's racism has also cost him the support of donors like Land O'Lakes and Purina, and the Sioux City Journal took the unprecedented step of endorsing King's Democratic challenger, J. D. Scholten, over King himself because the congressman "holds up this district to ridicule and marginalizes himself within the legislative body he serves, neither of which provides benefit to Iowans who live and work here." It cited as an example of how King has embarrassed his district that he had posted a "tweet in support of a candidate for mayor of Toronto described in published reports as a 'white nationalist' or 'white supremacist.' That wasn't the first time King was tied, by his words or actions, to such intolerant ugliness."

King has also retweeted a neo-Nazi, tweeted a quote from Hungary's far right prime minister Victor Orban and tweeted support for a far right Dutch politician Geert Wilders. He also has a Confederate flag on his congressional desk, even though Iowa fought for the Union during the Civil War, and filed an amendment to block efforts to put Harriet Tubman on the $20 bill by arguing that it was part of "liberal activism on the part of the president that’s trying to identify people by categories, and he’s divided us on the lines of groups." He also once said, when asked about a future in which non-whites outnumber whites in America, that "I will predict that Hispanics and the blacks will be fighting each other before that happens."

This isn't to say that Cruz doesn't have any questionable racial comments in his own past. Most recently he attacked his Democratic opponent, Rep. Beto O'Rourke, for criticizing a police officer in Dallas who broke into an apartment that wasn't her own without cause and shot its occupant, Botham Shem Jean.