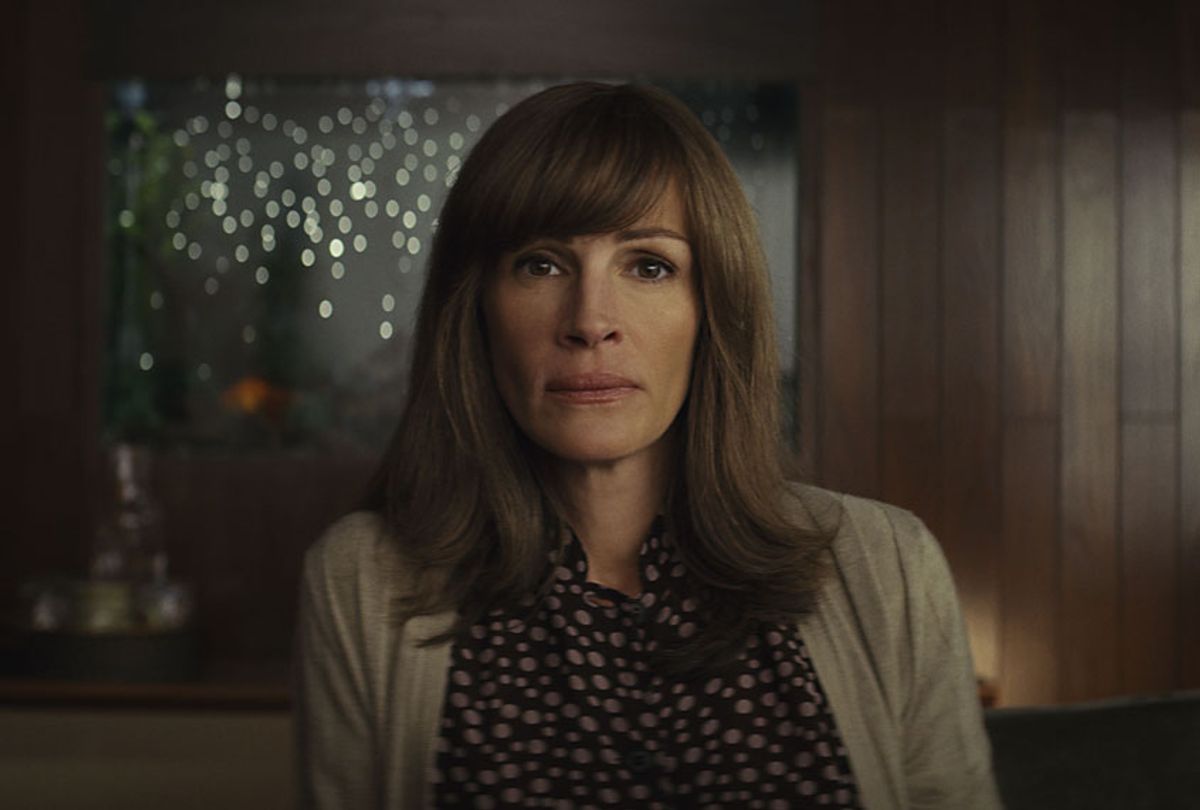 Evoking the right atmosphere makes or breaks any audio drama. This places the onus on their creators to provide enough nuance within the dialogue delivery, sounds and intermediary silences, for listeners to absorb these minimal offerings and paint a full visual inside the mind. That could be why few of the podcasts that have been made into TV series thus far haven’t measured up to the original product: what we’ve already envisioned has more life and color.

Sam Esmail may have made that calculation when he designed “Homecoming,” Amazon’s latest series and Julia Roberts’ first major foray into series television, debuting this Friday to Prime subscribers. And it is a thoroughly designed work whose drab palette and spartan sets play their part in perfuming the entire story with paranoia, a sense that something isn’t right.

Even Roberts herself contributes to that aura with a performance that seems purposefully muted, boiling down her beleaguered mental health counselor Heidi Bergman into the essence of a weighted down drone, only occasionally buoyed by a tantalizing dream of something better.

And even that “what if” reverie is so very, very plain that it threatens to be heart breaking, if we weren’t so immersed in the disquieting sensation of it all.

Esmail, who created USA Network’s stylish thriller “Mr. Robot,” adapted “Homecoming” (and directs every episode) from a podcast created by Eli Horowitz and Micah Bloomberg. Although he’s previously insisted he didn’t choose the script because of thematic similarities to his basic cable creation, it’s easy to see why Esmail would knock a story like this out of the park.

The first season of “Homecoming” is a 10-episode tease of our sixth sense, however one might define that. It follows Heidi Bergman (Roberts), a recently hired counselor at the Homecoming Transitional Support Center in Florida, a facility inside of what looks like an office park that exemplifies corporate incursion into military affairs.

Homecoming, we’re led to believe, is devoted to re-assimilating combat veterans into civilian life. A company called the Geist Group runs it, and houses the men in very simple dorms, serving them hearty meals and filling their schedules with group and individual therapy sessions.

Some men, like Walter Cruz (Stephan James), seem more prepared to return to non-combat life than others. Although Walter wrestles with his share of demons he maintains an easy sense of humor that helps him forge a connection with Heidi.

Other Homecoming clients harbor the suspicion that the place’s stated purpose is not altogether on the up-and-up. And soon this percolating unease permeates everything we see. Partnered with this is Heidi’s steadily elevating stress levels, fed by regular and badgering phone calls from her boss Colin Belfast (Bobby Cannavale), the archetypal executive justifying his paycheck by screaming at his subordinates for reasons that are rarely clear.

Bear in mind: All of this occurs in 2018. Shuffled within this A-story is a secondary plot, set four years into the future: In 2022, we see Heidi is working at a waitress at a run-down seafood joint and living at home with her mother (Sissy Spacek). It is then that an auditor from the Department of Defense named Thomas Carrasco (Shea Whigham) approaches her with questions about what she did at Homecoming.

Problem is, Heidi can’t remember a thing. And she doesn’t seem to be faking her memory lapse. She honestly isn’t able to recall any of what Carrasco is inquiring about.

“Homecoming” messes with the audience’s perception, fertilizing a palpable paranoia by spinning a story of a place that may not be all that it purports to be. Like “Mr. Robot,” it mirrors the tensions of 2018 without bludgeoning us into the dim corners of confusion and despair.

Where “Homecoming” departs from Esmail’s other creation is that it is almost aggressively spare in its stylistic cues — on top of being eerie, and unnerving, and fascinating. That may read as more complex than it is to watch; another difference is that its half-hour episodes are presented in fairly straightforward fashion. But to viewers familiar with “Mr. Robot,” a drama so narratively complex that some episodes demand multiple viewings, “Homecoming” may feel like a relief.

And if you’ve avoided “Mr. Robot” or fallen away from it because of its intense devotion to nearly rococo plot twists and mind-bending, gymnastic plotting, “Homecoming” definitely feels more accessible.

In no sense can its story be described as facile, however. On the contrary — the economic presentation of its complexities is among the many reasons that it’s enjoyable.  There’s that, and the fact that no episode runs longer than 38 minutes. Yet its plot loses none of its potency due to that devotion to brevity.

One could even surmise that this element is in keeping with the story’s thematic focus on containment, a concept Esmail portrays in visual details.

Esmail is a fan of augmenting the emotion of his pieces with specific cinematic choices, utilizing distant overhead views to make characters look like they’re rats in a maze, or employing wide shots to film a single character at the center of a room to make her look as if her space, her office, is a stomach that’s slowly digesting her. He also has a yen for using large blocking screen titles that pop up well into the action, like an interruptive declaration threatening to make you jump out of your skin.

Coupled with a score skewed toward dissonance — inspired heavily by Bernard Herrmann’s whirling menacing tones rendered in minor key — even the subtler details manage to be impactful.

Esmail chooses to differentiate between the time jumps with the familiar visual cue of Roberts’ changed haircut (which does not improve in her transition from the office world to the service industry) as well as futzing with the aspect ratio. You’ll soon notice that the Homecoming scenes appear in wide-screen, while Heidi’s much smaller life at the anonymous fish shack is squeezed into a portrait-shaped box. The camera itself is performing.

But it doesn’t take away from the actors’ contributions to the piece. Whether the focus is Roberts’ quiet, darkening subtlety, Whigham’s stony determination or Cannavale’s sleazy aggression, the performances lift the narrative instead of battling for supremacy. That said, Whigham’s dogged agent grabs our attention and never lets go partly because he’s the viewer’s avatar in this bizarre scenario, helping us to piece together what’s really doing on.

There’s a common thought, a joke even, that movie stars transition to television for a shot at scoring an easy Emmy, although that’s less of given today than it ever was. But if Roberts get a nod for “Homecoming,” credit is owed as much to the Esmail’s intricate creation of the magnetic discomfort surrounding her at all times as it is to her work.

Hers isn’t a blaring, “see me” performance, but one of a woman watching the world fold in on her and consuming the people she’s supposed to be helping.

Beyond this, “Homecoming” is a study in culpability. In the sessions, the soldiers are walked through simulations of real world scenarios involving interactions with business owners who may potentially hire them and other civilians to gauge their readiness to merge back into a world where, ostensibly, threats don’t lure around every corner.

Only they do, and the audience can see that. And they know it — many of the group therapy sessions show the men making these exercises into a joke or aggressively dismissing the role-playing skits as unrealistic and meaningless. But perhaps the same can be said of Heidi’s job, and Colin’s, and the decisions being made by unseen others that shape the lives of these men in possibly sinister ways.

There’s a helplessness soaking “Homecoming” to which many people will be able to relate, I suspect, enough to make them look forward to its second season. There’s also a great deal to appreciate about what it’s giving us now, in a story that rolls out swiftly enough to allow the viewer to float along in curiosity as opposed to being pulled into its undertow.

Somehow it finds a way to make deception seductive instead of tiresome. These days that feels like a lost artform that “Homecoming” makes vital and alive once again.