"Mr. Robot" in the age of resistance 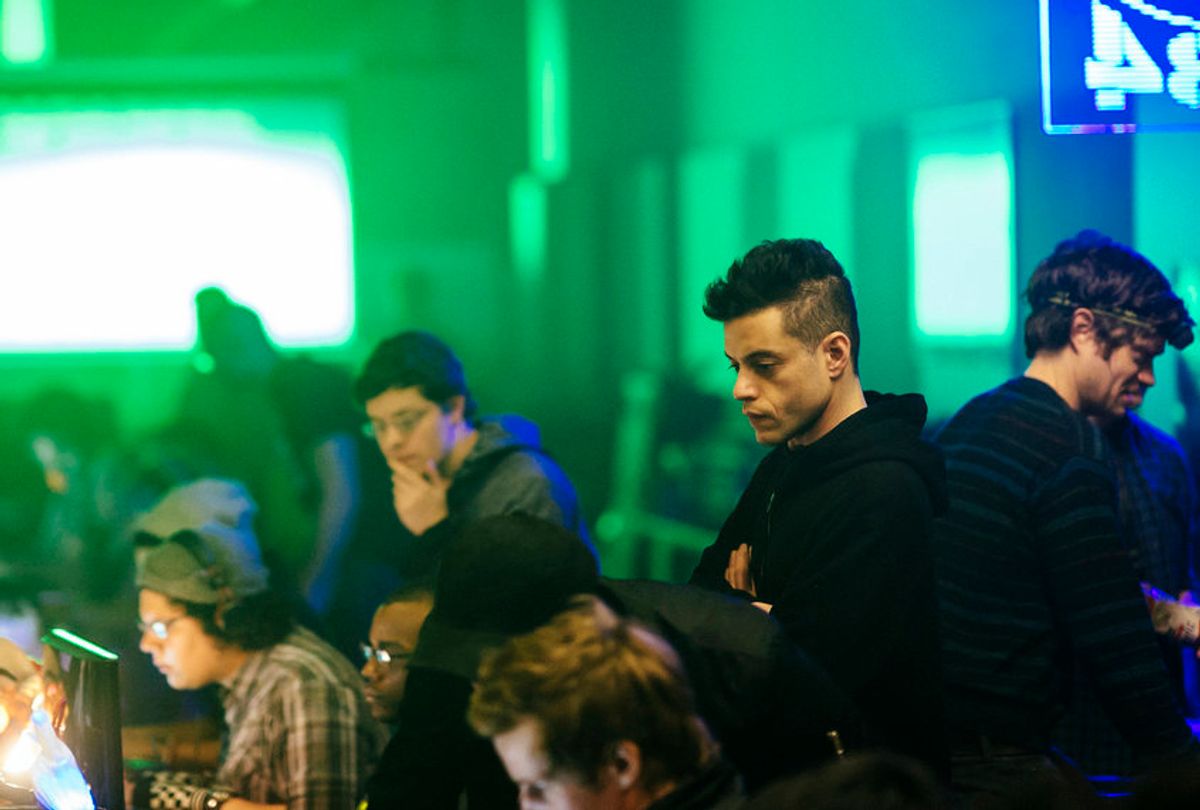 Nearly all of Elliot Alderson’s problems are created by his compromised ability to relate to the world around him. The unsettled protagonist of USA Network’s “Mr. Robot,” returning Wednesday at 10 p.m., is a man split in two, with one psyche operating with cold certainty of his mission and near total disregard for the collateral damage caused by his actions.

But when Elliot (Rami Malek) believes he’s in control, he actually isn’t. A cyber-security engineer and gifted hacker, Elliot relates to the world via programming code, ciphers and algorithms, languages useful for interfacing with system mainframes and machines but that don't account for the unpredictable nature of human reasoning. Gargantuan ambition, unchecked greed, equating entire classes of people’s right to exist with the collective net worth — these are not errors Elliot can correct with one subversive action.

He knows that now, having tried in season 1 with a hack known as “5/9” implemented by the once-mysterious Mr. Robot (Christian Slater) and his team of rogue hackers called fsociety. The idea was to create a new order, putting power back into the hands of the people by wiping out all corporate balance sheets and debt: Elliot, Mr. Robot and his friend Darlene (Carly Chaikin) set out to be techo-warriors styled after Anonymous hacktivists. As Elliot viewed things, they would be heroes.

Except for the fact that Elliot's psychological state, initially diagnosed as social anxiety disorder, is far more fractured than series creator Sam Esmail originally presented. Elliot has done little else but show us, his invisible friend, the ways that technology caters to the individual’s ego, even as it divides the whole, making it easier for conglomerates like E Corp (the multinational Elliot refers to as Evil Corp) to shape our collective will to suit their ends. The viewer is inclined to trust him, since, as far as we can tell, he’s the good guy.

But in the way of all system updates, Esmail introduces bugs in “Mr. Robot” that drastically shift Elliot’s paradigm and change the course of a narrative that was challenging to begin with. The end of season 1 revealed that Darlene is in fact Elliot’s sister; that Mr. Robot wears the face of their deceased father Edward and is a figment of Elliot’s delusions.

Elliot and Mr. Robot are a single entity — and throughout the second season, Elliot begins to realize that Mr. Robot is running his life and could destroy the modern world as we know it. Elliot attempts to stop his alter ego from destroying the office building housing E Corp’s paper records, killing everyone inside, and takes a bullet for his efforts. He doesn’t believe the man aiming the gun at him, Tyrell Wallick (Martin Wallström), is real. But he is. And Tyrell, a former adversary, pulled the trigger on Mr. Robot’s orders, indicating that Elliot has less of a grasp on reality than he ever did.

So Esmail jammed the fabled red pill and blue pill from “The Matrix” down our throats at the exact same time, in other words. Provided this didn’t wipe your memory, it was an impressive if not altogether solid gambit.

For all of these reasons and others, “Mr. Robot” can never be characterized as a passive viewing experience. Esmail constructs the storyline with the tortuous complexity of a massive multiplayer game in which he’s the only player in with a controller. The plot’s twists, reversals and restarts are simultaneously mesmerizing, befuddling and irritating in various degrees.

Neither is purely escapist, given Esmail’s employment of political issues and cultural figures only slightly removed from our present. If not for the vibrant writing and superior performances by a cast that now includes Bobby Cannavale as a quirky facilitator, the show’s depiction of America’s accelerating slide into chaos would be draining. Esmail’s brilliant and consciously stylized directing carries a significant load as well; every shot is framed to serve as a noticeable, silent chorus, coupled with masterful sound editing designed to lock us inside Elliot’s head.

This conspicuous partnership between the writing and sensory aesthetics is in keeping with the spirit of a tale about control and the illusion, peddled on a massive scale, that We the People still have some of it. These themes remain at the core of season 3, although they’re more centralized in Elliot himself as he wrestles with the damning realization that everything he believes about the world may be wrong.

The second season repeats the refrain that nothing seen by Elliot or the audience — we also exist as a mute observer inside his head — can be trusted. Not even Elliot's best friend Angela Moss (Portia Doubleday) is a reliable ally. And Elliot/Mr. Robot’s fsociety plan proves massively faulty. Now fsociety is in the crosshairs of law enforcement officials, with FBI Agent Dominique Dipierro (Grace Gummer) at the head of the hunting party.

And “5/9” may have cleared the way for the presumably malignant “Stage 2,” enacted by the secretive Whiterose (B.D. Wong) and the faceless zealots of The Dark Army, whose objective may be to embolden the very global conglomerates Elliot sought to take down.

Realizing that he’s created a viral fear with his intended act of liberation, Elliot wonders aloud, “Did my revolution just bury our minds instead of freeing them?”

Although the drama’s timeline places it well before the 2016 presidential election, Esmail uses it to speak to our dark present as the third season kicks off. Every thoughtfully written series does this, and in Elliot, Esmail has a shrewd mechanic of the human condition as it is processed by mobile apps, social media and search engines – those powerful predictors of human behavior and tools of mass manipulation.

Still, the drama’s portrayal of what’s really going on behind the digital curtain is particularly captivating now, when the veil between conspiracy and fact is thinner than single-ply tissue. Recent warnings made by the people who engineered the detrimental and addictive nature of social media sound a lot like the very poison Elliot rails against in voiceovers dripping with disconnected fatigue. Ongoing investigations of the extent to which Facebook was intentionally used by foreign actors to mislead the American electorate shouldn’t shock anyone who watches this show.

Reality, as we know it, is frightening. But as viewed through the lens of “Mr. Robot,” Esmail makes the fictionalized version of our increasingly dystopic existence palatable, even exciting. Elliot is getting an idea that we may never be okay again, as are we. But who knows for sure if any of this is real?