A matter of perspectives: "Mr. Robot" takes a long shot 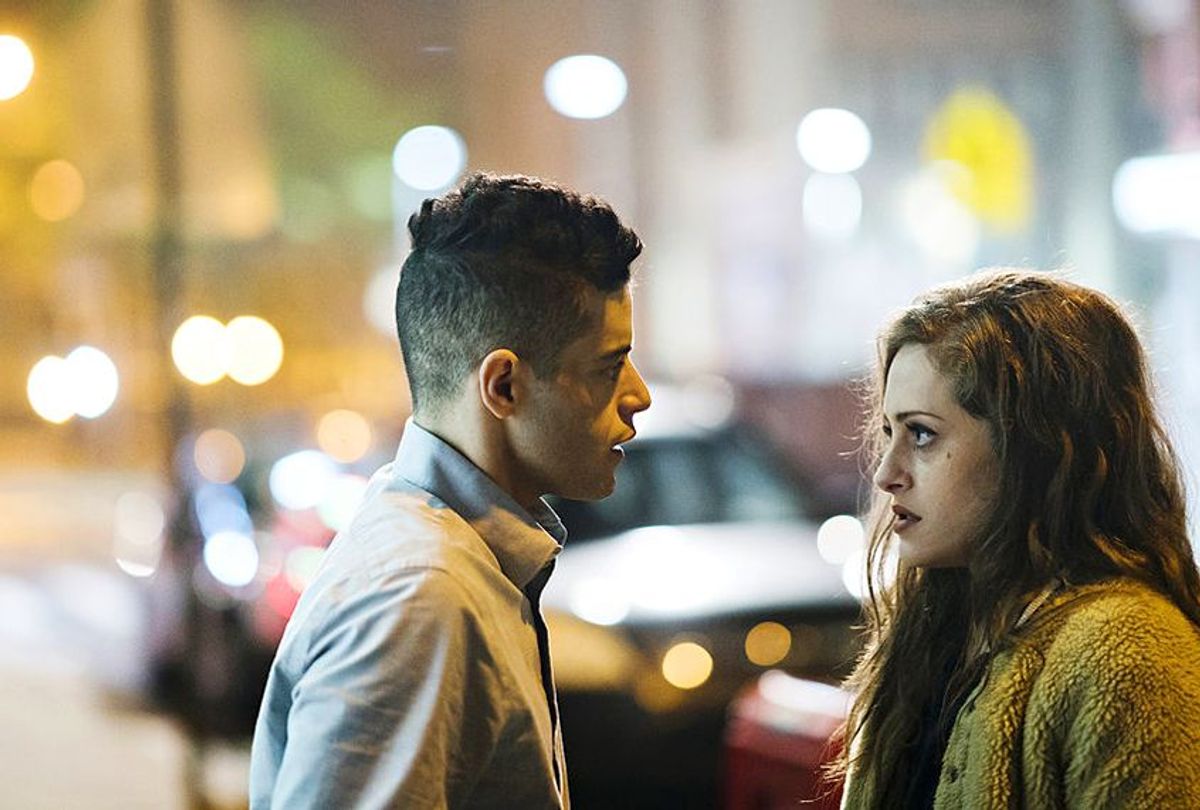 Viewing life and consciousness as another version of code is the only way the work makes sense to Elliot Alderson. The hero of “Mr. Robot” lives with a severe dissociative disorder that makes it difficult to interact with other people, or even to know if what or who he’s seeing is real.

The only entity he can trust is the audience, the invisible entity collectively confided in and referred to as his friend. Elliot, played by Rami Malek, trusts that we’re hovering just over his shoulder, listening in as he analyzes the bewildering, annoying behavior of those around him and wonders silently (and aloud to us) what his next move will be.

This approach adds a seductive intimacy to “Mr. Robot,” airing its third season episodes Wednesdays at 10 p.m. Eliot’s genius and his fractured psychological state allow series creator Sam Esmail to mold the USA drama’s narrative in ways that fascinate and challenge viewers — sometimes a bit too much, especially if you’re among those so frazzled and confused by season 2’s mind warp that you jumped ship.

But if you’re caught up with the story — and you should be if you’re still reading this, unless you want to be spoiled — prepare to be wildly rewarded with Wednesday night’s installment. In it, Esmail and the show’s director of photography, Tod Campbell, embed us even deeper with Elliot and Angela during a single-take episode aired without interruption.

“Point of view is incredibly important in any form of storytelling, but I think it’s particularly important here because we are very subjective in our filmmaking when it comes to perspective and point of view,” Esmail told Salon.

The single-take approach facilitates this, he added, because it enables the viewer to take each step with Elliot and others as they stumble upon several game-changing revelations. The title, “Eps3.4_runtime-error.r00,” refers to the standard protocol for code. For Elliot, it also sums up the average day for a corporate drone on auto-pilot: “When code runs,” he says, “it should run straight through without interruption until all of its tasks have been completed.”

The moment he senses something is off marks a turning point in a season that has layered the characters’ conflicting agendas into a teetering stack, especially with regard to Elliot, who is more at odds with Mr. Robot than ever before. Elliot’s alter ego, played by Christian Slater, only shows up for a moment in this new episode; there’s more than enough conflict to navigate between Elliot, his sister Darlene (Carly Chaikin) and his deceptive best friend Angela (Portia Doubleday).

Esmail has always designed “Mr. Robot” as a work that smoothly interfaces with our tech-driven world, but in this episode he and Campbell created the illusion of a continuous shot that lasts nearly 46 minutes for a purpose beyond merely showing off their cinematic expertise.

The long take is a time-consuming directorial approach known for its relatively high level of difficulty, even when engineered. It was a more common practice when live TV was a broadcast standard. Nowadays, directors of photography employ them as a technical feat allowing the camera to forward the plot in concert with an episode’s writing. Think of Cary Joji Fukunaga’s celebrated, magnetizing long shot in the “True Detective” episode “Who Goes There.” A person might not recall everything that happened in that episode, but if you saw that final sequence it’s tough to forget it.

That consisted of a few minutes and was a genuine single take. “ Eps3.4_runtime-error.r00” is the product of smoothly joining 30 tracking shots filmed at several locations over the equivalent of nine days. Esmail also had to choreograph the casts' movements and timing with precision. (Without spoiling anything, adding to the impressiveness of this particular one-shot feat is that the episode employs a lot of extras.) The final product creates the sensation of smoothly flying beside Elliot and Angela, or just a few steps behind, as each races against time.

“We knew from a writing perspective that it needed to be real time,” Esmail explained. When he and Campbell started to map out the episode’s filming, “it really became clear that the best way to really get in was to be on Elliot's journey, and then switch to Angela's, and make it feel as seamless as possible. We don't even want people to know that they're in a single take. We want people to just be along for the ride and really be embroiled in what Elliot's going through.”

As the action kicks off, Elliot implores us, his unseen friend, to help him figure out what he’s up against. “Do not leave me,” he says. “Stay focused.” Trust me: that directive is simple to execute.