Trump rolls out "Willie Horton 2.0," the most racist political ad in 30 years

Donald Trump plays dirty, like the pro wrestling heel he is. But his ugly new ad isn't desperate; it's shrewd 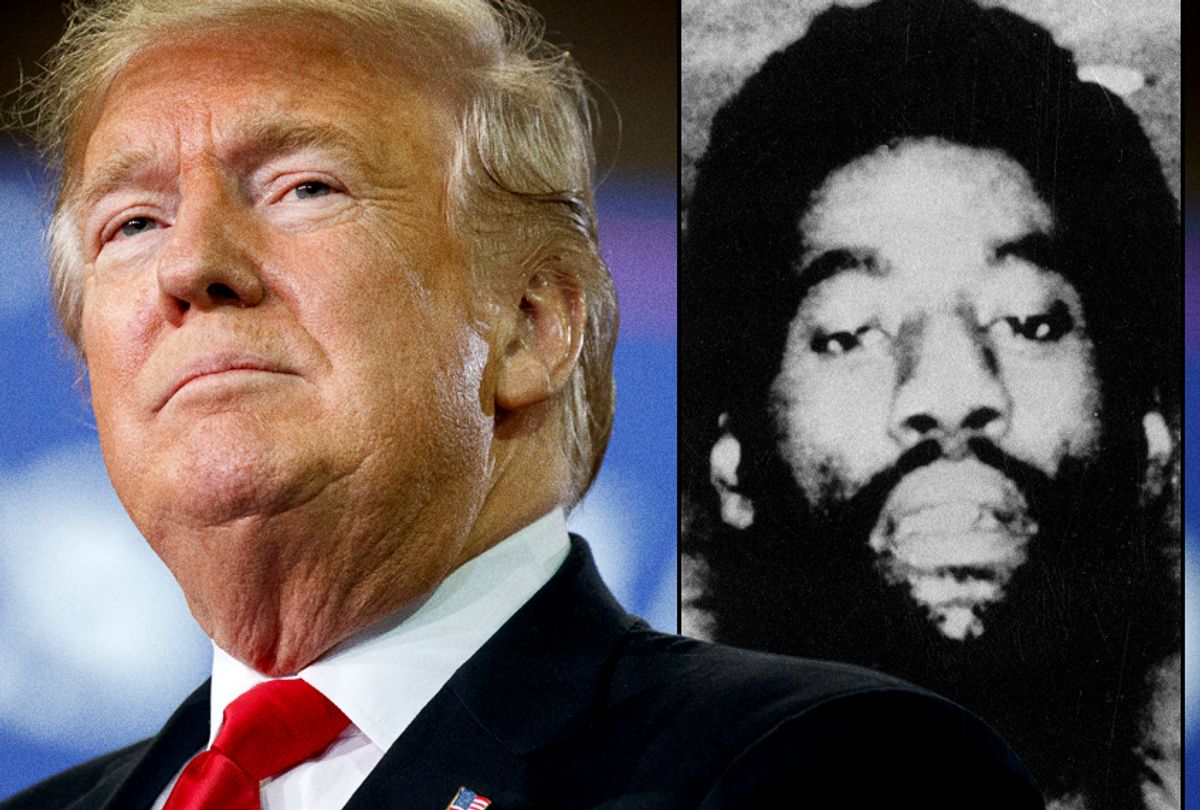 Donald Trump is a professional wrestling "heel" (or villain). He lies, insults his opponents, pretends he is a victim, breaks the rules at will and is willing to do anything to win. Like any other such heel, Trump delights in violence. He is a master of it.

As the professional wrestling match reaches its climax, the heel only becomes more violent.

He assaults the "face" (i.e., the hero) with all manner of weapons and objects, the blood flows and the crowd howls. The crowd knows that this is what the heel will inevitably do. It is his nature. It is expected. It is no less shocking.

America is at such a moment with Donald Trump. Days before the midterm elections and following lethal violence inspired by his rhetoric and policies, Trump the wrestling villain has pulled a weapon out of his trunks and is gouging his opponents with it. The audience in the arena howls, as disgust and anger combine with glee and titillation.

This ad focuses on Luis Bracamontes, a Mexican man who had previously been deported but returned to the United States and was convicted in February in the killing of two California deputies. "I'm going to kill more cops soon," Bracamontes is shown saying in court as captions flash across the screen reading, "Democrats let him into our country. Democrats let him stay."

This racist strategy of fear-mongering and in most cases outright lying about Hispanics and Latinos is being copied by Republican candidates and elected officials around the country. This is a textbook definition of racism: The bad behavior of one person is used to smear the "nature" and "character" of a an entire group of people.

Some have suggested that Trump's new ad resembles George H.W. Bush's infamous "Willie Horton ad" from 1988. It showed Horton, a black man supposedly furloughed from prison on a weekend pass by Massachusetts Gov. Michael Dukakis, then the Democratic presidential nominee. While Horton was out of prison, he had raped a white woman. But the association was unfair; Dukakis was not responsible for the weekend furlough program, which had been started by one of his predecessors. Nevertheless the Willie Horton ad is believed to have played a decisive role in the 1988 presidential race, persuading undecided white voters to support Bush.

Contrary to what some observers would like to believe, Trump's vile new ad is not a sign of weakness or desperation. Nor is it born out of fear that the Republican Party will lose in the midterm elections on Tuesday. Rather, it's a calculated move that reflects the way polling data and other research shows that Republican and right-leaning voters -- especially Trump's acolytes -- are motivated by a racist obsession with nonwhite "illegal" immigrants and a fear that white people will somehow be "oppressed" in an more racially diverse and cosmopolitan America.

Moreover, new research from PRRI shows that even when white Republican and right-leaning voters admit that Trump's behavior is problematic and dangerous because it empowers white supremacists, they support him nonetheless.

There is other research which explodes the myth that there is some type of electoral penalty when Republicans use overt or subtle racism to win elections.

Michael's Tesler's "Post-Racial or Most-Racial?: Race and Politics in the Obama Era", Lilliana Mason's "Uncivil Agreement" and Christopher Achen and Larry Bartels' "Democracy for Realists" all demonstrate in compelling detail how the American public has become polarized and sorted.

Reflecting that fact, white voters and those others who are compelled by racist appeals vote almost overwhelmingly for Republicans. The Democratic Party is a multiracial coalition which, for the most part, rejects racism. White independent voters and other (white) undecideds do not pay close attention to politics. Negative campaigning and the use of racial "dog whistles" and overt racism may actually demobilize those voters. And if these voters "hear" and "see" Donald Trump and the Republican Party's racism they may be indifferent to complaints by Democrats and others about it. Here the right-wing has won the language wars by weaponizing "political correctness" into a blanket excuse for racism and white supremacy.

Donald Trump's naked, raw and unapologetic public embrace of racism, white identity politics and nativism is part a larger branding strategy by the Republican Party. Trump's new ad is but an exclamation mark on that fact.

The elements of this strategy include the following.

The Southern Strategy and Birtherism; efforts to keep nonwhites from voting; gutting the legacy of the civil rights movement; a plan to overturn birthright citizenship and the 14th Amendment; de facto "whites only" immigration policies; "law and order" and "culture war" issues; the incitement of violence against black and brown "snakes," "vermin" and "infestations" from Latin America who are going to "invade" America to rape and kill white women and commit other crimes.

It is no coincidence that prominent white supremacists like David Duke, members of the Ku Klux Klan and neo-Nazis, along with other factions of the "alt-right," claim Donald Trump as their champion. By virtue of his words, deeds and policies Trump has shown himself to be a white supremacist. His most ardent supporters know this to be true.

It is no coincidence that white racist domestic terrorists and other thugs wear Trump's MAGA regalia and chant his name. It is no coincidence that Donald Trump's White House has embraced the likes of Stephen Miller, Michael Anton, Sebastian Gorka, and Steve Bannon -- a cabal that individually and collectively advocates for "nationalist" policies and seeks to undermine the rights and freedoms and dignity of nonwhite people both in America and around the world.

Ultimately, Donald Trump's presidency is a referendum on America's multiracial democracy. He and his Republican voters are willing to jettison it if white people are not the country's single most powerful group. For Donald Trump, the Republican Party, their news media and voters, American democracy is contingent on absolute uncontested white power.

As the professional wrestling match reaches its climax, there are several possibilities for how it may end and the story line either resolved or continued.

The hero, now bloodied and beaten, can lie on the mat or the floor outside the ring, seemingly spent and unable to move. The heel then stands over him, posing and gloating for the crowd. The "face" will get his (or her) revenge at some point in the future. This is justice delayed. It is more poignant, more earned and more powerful when it finally arrives.

There can also be a moment in the match where the heel is so cruel and barbaric that even his fans turn against them. The face or hero is by nature a sympathetic character. The heel has now gone too far in his violence and it must stop. But for Donald Trump, the professional wrestling heel turned president of the United States, nothing he can do would force his fans to abandon him. He gouges and strikes and bloodies his opponent beyond what is necessary -- the metaphorical ice pick in his hand or chair over his head blasting the hero -- and his crowd screams for more.

But there is another possibility as well.

The hero may finally realize he cannot defeat the dastardly villain unless he is willing to go just as far, if not farther, than his foe. The heel must be vanquished by fighting fire with fire. In the rematch the hero attacks the heel with just as much ferocity -- or more -- than ever before. The heel is shocked and must retreat. The hero has changed. The heel tries to grab a weapon out of his tights or boot. The hero smacks it away. The heel tries to strike below the belt. The hero blocks it. And then the hero grabs his own weapon, gouges the opponent's eyes or knees his groin, hits him with a chair, or puts them through a table. The heel is getting what he deserves; the hero is finally willing to do what is necessary to win because he or she has been pushed beyond all limits by the villain.

Too many Democrats and their leaders want to be noble, however, when confronted by the would-be fascist heel of this moment. Sen. Cory Booker continues to preach love. House Minority Leader Nancy Pelosi has predicted victory in the midterms on national television--such a boast can lead to disappointment and disaster. There are still Democrats and their supporters who believe in the virtue of the wholly disproved 2016 campaign mantra, "When they go low we go high."

To defeat Donald Trump and his movement, Democrats and other people of conscience must be prepared to do whatever do is necessary to win. American democracy depends on it. Anything less is unacceptable: The loser in this political professional wrestling match may never get the opportunity for a rematch.