Why do so many California politicians count themselves as adherents of YIMBY, a pure form of neoliberal sophistry? 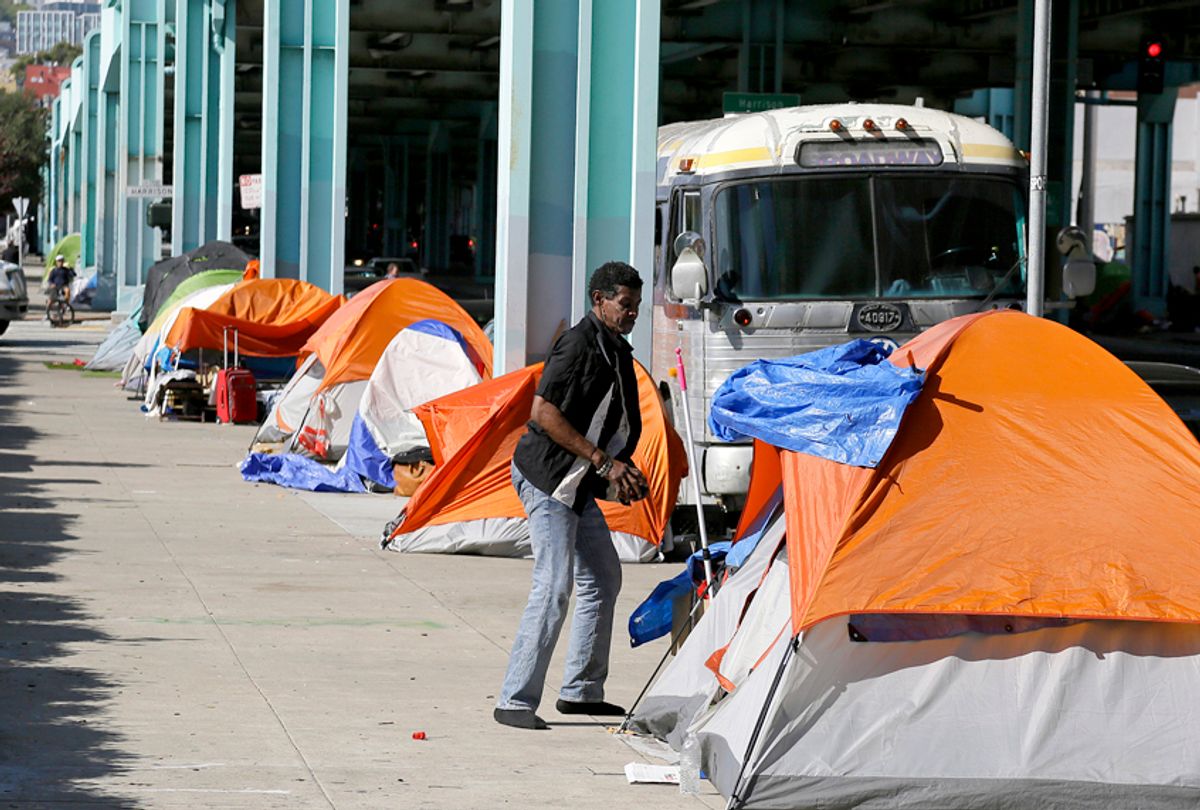 A man stands outside his tent on Division Street in San Francisco. (AP/Eric Risberg)
--

There is a sentence buried in a 2007 San Francisco Planning Commission study that would appear to refute one of the most visible housing activist movements in California. That rarely-cited sentence reads:

For every 100 market rate condominium units there are 25.0 lower income households generated through the direct impact of the consumption of the condominium buyers and a total of 43.31 households if total direct, indirect, and induced impacts are counted in the analysis.

The YIMBY movement, an acronym for “Yes In My Backyard,” consists of developers, activists, politicians and a few political advocacy groups who hew to a seemingly simple creed: To solve the housing crisis, we must simply build more housing. As much of it and as fast as possible, and of all types. The cheery acronym “YIMBY” is, of course, intentionally counterposed to “NIMBY”, shorthand for “not in my backyard,” an anti-development philosophy often used as a slur and which predates YIMBY by many years.

One of the most visible political figures in the YIMBY movement is Sonja Trauss, a local activist currently running for one of the city supervisor seats in San Francisco. Trauss was profiled in the New York Times in 2016 for her work as head of the pro-YIMBY San Francisco Bay Area Renters’ Federation, in an article in which she described her view on building housing in the Bay Area:

That there is a housing crisis in the Bay Area, particularly in the more expensive and dense cities like Oakland and San Francisco, is indisputable. Hence, on the surface, there is something enticing about the more, more, more logic of YIMBY. If an apple shortage drives up the price of apples, and an entrepreneur suddenly floods the market with apples, the price will drop. Is housing not a commodity on par with apples, oil, paper, or any other widget?

It turns out the answer is no.

Indeed, the main implication of the planning study mentioned earlier is that “just building housing” doesn’t work because housing is nothing like apples. Developers want to maximize profits as much as possible; that means building market-rate housing, which is worth far more to a developer than affordable housing. Yet as the aforementioned study found, building four market rate condominium units results in a demand for an entire lower income household, and possibly more than that. In other words, building market-rate housing actually makes the housing crisis worse for working-class people.

Erin Reeves, tenant empowerment organizer at the nonprofit Mission Housing Development Corporation and one of the steering committee members of Yes to Affordable Housing, said that part of the reason housing is a unique commodity is that housing — unlike apples — is tied to location. “Housing is place based,” she told Salon. “You could build your [apple farm] somewhere different where wages were cheaper... Where running a factory was cheaper, and you could cut costs there. You can’t do that with housing. The value comes in where it is.”

Likewise, Reeves explained that the analogy falls apart in that there isn’t quite a “luxury” market for apples in the same way there is one for housing. “Fernando Marti, one of the codirectors of CCHO, he likes to make the analogy to cars,” Reeves said. “Like, Mercedes’s goal is not to have the cost of a Mercedes suddenly drop down and become affordable to everybody. [Developers] are going to build to meet the luxury need first, and in the process of doing that, [the] displacement that happens, the harm to communities that happens — that all is happening simultaneously as you are building to meet the luxury need.”

A more recent housing survey from the San Francisco Planning Department revealed the extent to which the "just build more housing" philosophy has failed to alleviate the crisis. Maya Chupkov, communication manager at Council of Community Housing Organizations, demystified the technical details of that report, explaining that “just under 18% of net new units built in San Francisco over in the last decade were affordable.” Moreover, Chupkov noted that there were actually many affordable units that lost their protected status, meaning that “7 districts had a negative housing balance”; the Mission, long a site of rapid and violent gentrification, lost the most overall — 606 units.

Despite the conclusion of the SF Planning Commission study, many YIMBYs still believe that there will be a trickledown effect — that rich people don’t really want to live in, say, a poor neighborhood like West Oakland where they will displace middle- and lower-income residents, but will if there is no other option.

Yet again, the data doesn’t shake out that way. In August of this year, an oversaturation of market-rate and luxury rentals in big cities meant that housing costs dropped — for the wealthy. “U.S. cities struggling with soaring housing costs have found some success in lowering rents this year, but that relief has not reached the renters most at risk of losing their housing,” the Washington Post reported. “But the decline is being driven primarily by decreasing prices for high-end rentals. People in low-end housing, the apartments and other units that house working-class residents, are still paying more than ever.” San Francisco was among the cities where “rents [fell] for the highest earners while increasing for the poorest.”

“Market rate development [and] private development stops as the [housing boom and bust] cycle goes down,” Reeves explained. “As prices at that level tend to fall, luxury developers stop building. They don’t want their prices to fall past a certain point.”

This would appear to be a rebuke of YIMBY’s primary tenet. Indeed, in the Times’ 2016 profile of Trauss, there is a rare moment of self-awareness from the reporter, who describes the opponents of YIMBY as “groups [who] oppose almost every new development except those reserved for subsidized affordable housing.” Yet that oppositional belief is entirely logical given the facts about how only building more subsidized or affordable housing will alleviate the housing crisis.

One would think that this thorough debunking of YIMBYism would result in dismantling the nascent pro-market movement. And yet YIMBYism is stronger than ever: Trauss’ campaign is endorsed by some of the most high-profile Democrats in California, including San Francisco Mayor London Breed, State Senator Scott Wiener, and State Assemblyman David Chiu — all of whom have echoed some YIMBY philosophies. Likewise, a Venn diagram of politicians who espouse YIMBYism and politicians who receive donations from the real estate industry would likely resemble a circle.

It is hard to say definitively what accounts for this incongruity between empiricism and ideology. And yet, the culprit may have to do with the tendency of the rich and powerful to popularize ideas, however unsound, at the expense of the sound ones.

One might make an analogy to free market capitalism: its primary tenet, deregulation, tends not to make society and individuals more free, but rather than opposite. In practice, deregulation and privatization immediately shift power towards the rich and away from everyone else. History bears this out again and again. And yet, free market fundamentalism is popular as ever in economics departments and think tanks, mainly because universities are loaded with neoliberal and Austrian economists whose professorships are funded largely by billionaires who want to normalize their ideas.

Likewise, YIMBY’s main pushers (including campaign donors to politicians like Trauss and Breed) are rich developers and real estate barons, who shrewdly understand that YIMBY’s sophistic agenda, if normalized, will line their pockets. And since the message of YIMBY is so downright simple, its sophistry is easily masked.

“I think a lot of the people whom I interact with who are YIMBY-inclined or identify as YIMBY are much more the [everyday] folks who are just trying to get into housing and really want to be engaged in a way that’s helpful,” Reeves speculated. “This is the movement that [welcomed] them with open arms. They’ve kind of bought into that and tend to be people who buy into rationalism and capitalism, all those things too, because it fits into their worldview. That I think is really genuine.”

Reeves noted that the YIMBYs have been effective at dividing their opposition. “There is a very clear intent, at least in the San Francisco YIMBY leadership to divide affordable housing developers and tenants’ rights groups. That has been openly stated, to try and kinda break apart that movement.”

Chupkov didn't see YIMBYism as the enemy, but more of a coalition of many well-meaning activists who perhaps did not understand the full picture. “I do think that supply and demand is definitely [YIMBY’s] main argument, and I think it’s definitely part of the problem,” Chupkov told Salon. “But I also think that my ultimate perspective when I look at housing is from a social justice perspective, so theirs might not be as centered on social justice.”

Interestingly, Reeves was skeptical of using economic logic to defuse the YIMBY movement. “I think the YIMBY movement often keeps conversations about the affordable housing crisis in the realm of economic problems and solutions — how do we make the thing cheaper, instead of asking, who are we making it cheaper for, [and] who will it never be cheap for,” Reeves said. “The danger of that — and of trying to push back against them by staying in the framework of economics — is that it leaves behind the whole issue of justice and equity in housing, which is the core issue in housing right now.”

“Addressing the affordable housing crisis is partially about trying to lower housing costs for everyone, but it's also about making sure the people and communities that have historically been steamrolled, marginalized, devalued, and exploited in housing issues instead are prioritized, heard from, and valued in our policies and approach,” she concluded.