A referendum on Donald Trump: And what's scary is we don't know how America will choose

Two years after the trauma of 2016, a chance to repudiate Trump — and it's truly terrifying that it's this close 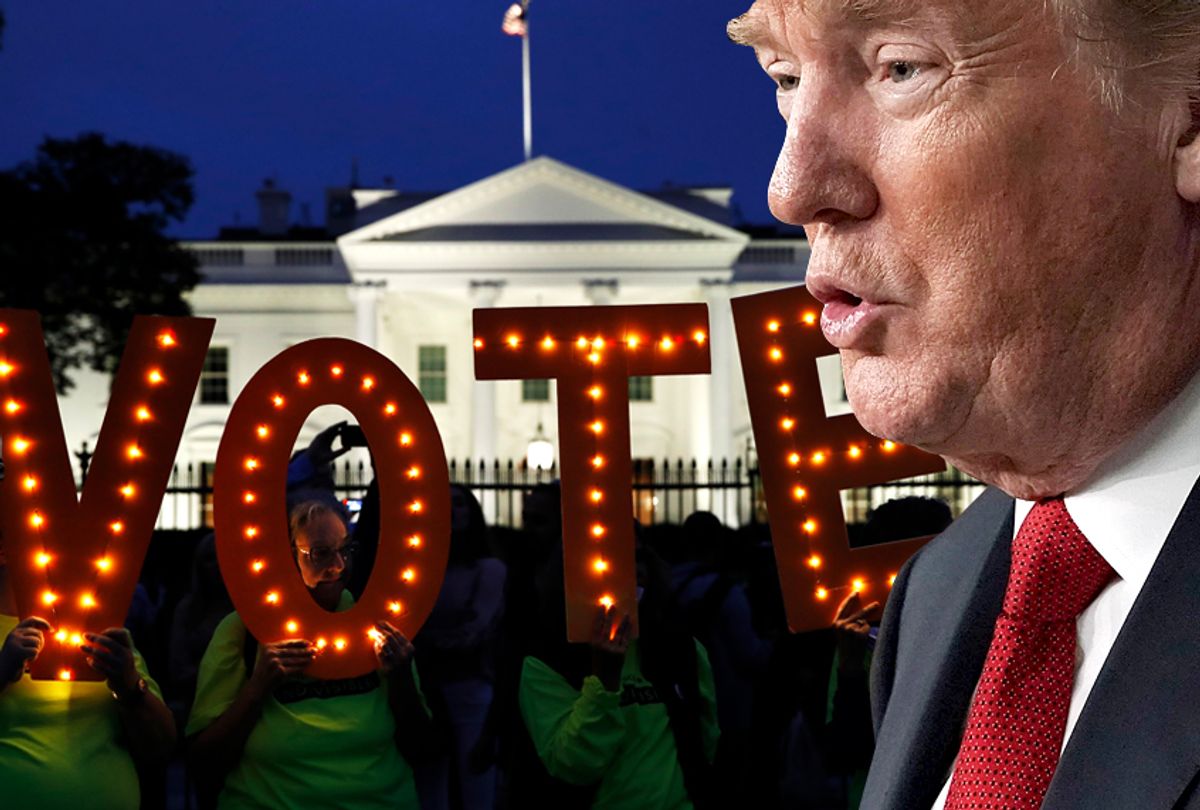 Members of Herndon Reston Indivisible protest of the confirmation of Brett Kavanaugh to the Supreme Court outside of the White House, Oct. 6, 2018. (Getty/Salon)
--

On Monday before the election two years ago, Democrats were merrily laying in their bottles of champagne for the inevitable Tuesday celebration. It had been the weirdest campaign in memory, maybe all of history, with the first female presidential nominee facing a bizarre unfiltered celebrity who might as well have landed from outer space. Everyone was optimistic, even a little bit wired from the overdose of surrealism, and anxious to get back to normal.

I had my morning-after Salon column almost entirely written before the returns came in. Having watched nearly all of Donald Trump's speeches and rallies and seeing the effect he had on his followers, I was concerned about what he had stirred up. Nonetheless I too succumbed to certainty in the last days even though I could see that the polls were uncomfortably close. It was hard not to. Being a generally positive, rational person, it simply seemed impossible that the United States of America would elect this unqualified demagogue to the most important job in the world.

Obviously, I had to rewrite that piece in the middle of the night, which my editor published under the headline, "A nation gone wrong in a world gone crazy."

Democratic voters reeled for a while, but nobody withdrew to their corners to feel sorry for themselves for long. Gobsmacked by this unthinkable result, people decided to resist this extremist president and soon picked themselves up and took to the streets, created organizations, convened meetings, donated money and filed to run for office. This surge of political involvement started immediately after the election and has continued at full steam ever since. It has been impressive.

The final polls show Democrats probably with at least the edge they need to take over the majority in the House, which was always the primary goal. The Senate map was always daunting, so I don't think anyone placed their hopes there. But they didn't need to -- one House of Congress can stop the GOP agenda in its tracks and provide the oversight that the president's accomplices in the current Congress have refused to provide. So one would think that the Democrats would be cautiously optimistic and somewhat energized, knowing that their hard work stands a good chance of paying off on Tuesday night.

I don't know about you, but I don't know even one person who feels anything but anxiety. Every Democratic voter I see around me, in real life, on social media and television is a nervous wreck. "Saturday Night Live" caught the vibe perfectly with a skit this weekend:

According to  a poll conducted by YouGov, the political environment is making Democrats so apprehensive that they are 50 percent more likely than Republicans to say they’re “eating their feelings,” meaning they are pigging out from stress. They report they are also drinking twice as much as their Republican counterparts and working out excessively, which isn't necessarily healthy either. NBC News reports:

“I’m seeing some people so stressed at the moment they're doing two, even three soul cycle classes at day,” Dr. Navya Mysore, a primary care doctor, tells NBC News BETTER. “Exercise is good for you, but too much is not. You [risk] dehydration and your body needs time to rest and rejuvenate.”

Meanwhile, therapists are treating what some are calling "Trump anxiety disorder" among people alarmed by the president's doomsday rhetoric, such as this one from last July:

Trump voters are upset too, mostly because of liberals' dislike of their president, which I examined in this Salon piece right after the 2016 election.)

It's natural for Democrats to be fretful about the election after the trauma of Trump's unexpected victory two years ago. Nobody wants to make the mistake of ever being so sure of themselves again, and then dealing with the PTSD that followed. And with all the shenanigans around voter suppression, gerrymandering, foreign interference and structural imbalance that make it necessary for Democrats to win millions more votes just to eke out a small majority, you'd be a fool to take anything for granted.

Wanting to put a check on Trump is the only rational response to what we've seen over the past two years. From defending neo-Nazis and right-wing crazies to destroying the global framework that's kept the world from catastrophic war for 70 years to rampant corruption and cozying up to the world's worst authoritarian dictators, it's been a living nightmare every single day. The nonstop reflexive lying and bragging and blame is enough to drive you crazy.

But even with all that, as terrible as it is, I don't believe it's the whole story. I think people are also anxious and fearful about this election because it will tell us, once and for all, how many of our fellow Americans have truly bought into this madness.

I think we all assume that in 2016 there were Trump voters who simply couldn't stand Hillary Clinton. While they knew Trump was appalling, they just couldn't pull the lever for her. And it's fair to conclude that there were quite a few Republicans and independents who thought his campaign persona was just an act, and that he'd become "presidential" once in office. The press certainly did.

What I think has many of us especially frightened is that we are seeing huge turnout for a midterm election, possibly even hitting the level of a normal presidential election when all the votes are counted. And we don't know if that huge surge means more of us or more of them.

The polls show that many of these races are very close! What if these past two years of Trump haven't opened more people's eyes to his unfitness for office, but have actually persuaded many of those formerly reluctant Trump voters that his act is a winner? How can we be sure there aren't new voters out there who believe that his terrible, horrible, very bad presidency really is the triumph he says it is? It's terrifying to contemplate.

That's what wakes me up at night with a start from a dream in which the whole country is a sea of red MAGA hats and the blue wave is just a trickle on the margins. A little neurotic? Maybe. But when you see those ecstatic cult-of-personality rallies and remember that Trump and his party currently control all three branches of government, it's not insane to worry. Let's just hope that after tomorrow, we can finally find some peace.

Oh, what am I saying? No matter what happens, Donald Trump will still be president. But maybe we will get to feel a little better that he isn't taking even more of the country all the way down the rabbit hole.