It's not just about George Soros: Across the country, Republican ads depict Jewish Democrats as money-grubbing 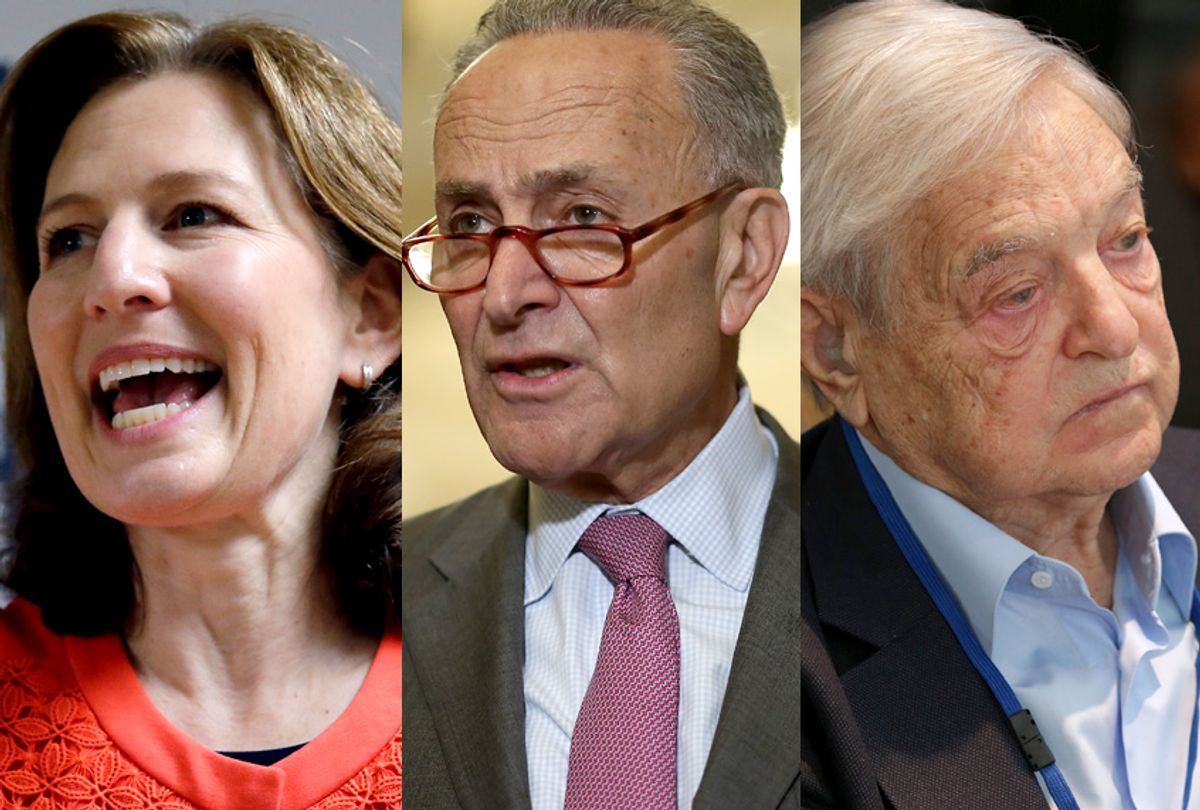 Republicans around the country are attacking Jewish Democrats by depicting them holding fistfuls of cash in ads that have been called “blatantly anti-Semitic” by other members of their party.

Scott Kendall, a Jewish Republican who serves as chief of staff to Alaska Gov. Bill Walker, an independent, told the Washington Post he was appalled to see his party sending mailers attacking Jewish Democratic state Senate candidate Jesse Kiehl by showing a man stuffing a big wad of cash into his suit.

“I was revolted,” Kendall told the paper, saying the ad was “blatantly anti-Semitic.”

“It is tough for me to process through that and not see an ill intent,” Kendall admitted.

Similarly-themed ads have been seen all around the country ahead of Tuesday's vote.

The North Carolina Republican Party ran an ad showing Senate Minority Leader Chuck Schumer holding a stack of cash, while 2016 Democratic presidential nominee Hillary Clinton and House Minority Leader Nancy Pelosi are not. (Schumer is Jewish; the other two are not.)

In California, Republican state Assembly candidate Tyler Diep's campaign “tinted his Jewish challenger with a shade of green” in an ad, and doctored the image to make him look as if he were holding $100 bills, the Los Angeles Times reported.

Another ad in Connecticut drew outrage last week after a Republican campaign altered an image of Democratic state Rep. Matthew Lesser to make his eyes look bulging, and added a wad of cash for good measure.

“What’s stunning is that these are old images that are very similar to those from other eras and other places,” American University Jewish Studies director Pamela Nadell told the Post. “But I will say I have not seen images like this in 21st-century America before.”

Republicans denied allegations of anti-Semitism. Dallas Woodhouse, who heads the North Carolina state Republican Party, said a reporter's question asking whether the mailers were anti-Semitic was itself “racist” and a “smear.”

“It is just one more final disgusting attempt to Kavanaugh Republican candidates and activities. We don’t track people’s religion here or lack thereof,” he claimed, adding that the question was “the single dumbest and most outrageous inquiry I’ve ever had from a member of the media.”

The ads come as the Republican Party embraces anti-Semitic tropes that previously were reserved for the fringes. Just last week, President Donald Trump said that he “wouldn't be surprised” if the migrant caravan marching to the border from Central America was funded by billionaire Jewish Democratic donor George Soros. Fringe conspiracy theorists in the United States and Europe have repeatedly alleged that Soros is funding protests, migrants and refugees.

Not long after, the National Republican Congressional Committee depicted Soros in ads behind piles of cash, alleging that he “bankrolls” everything from “prima donna athletes protesting our anthem” to “left-wing mobs paid to riot in the streets.”

The Anti-Defamation League condemned Republicans for using anti-Semitic conspiracy theories that have long been employed by fringe groups.

“Even if unintentional, politicians and pundits repeating these unsubstantiated conspiracies essentially validate the same hateful myths propagated by anti-Semites,” the group said. “A person who promotes a Soros conspiracy theory may not intend to promulgate anti-Semitism. But Soros’ Jewish identity is so well-known that in many cases it is hard not to infer that meaning.”