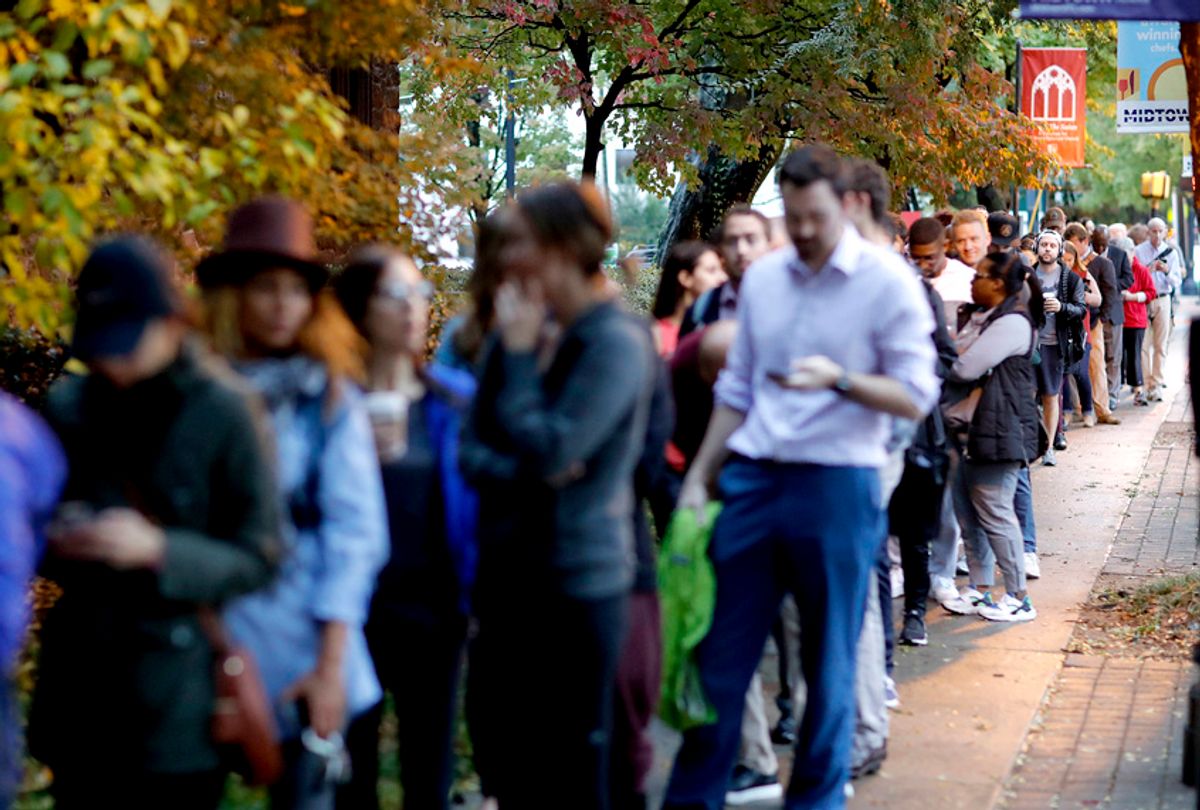 Polls just closed in Georgia, but Democratic gubernatorial candidate Stacey Abrams is urging voters to stay in line at the end of an Election Day marred by long lines and technical problems.

First there have been numerous reports of wonky voting machines and unusually long lines for voting, according to McClatchy DC. The wire service quoted one person who tweeted: "Atlanta Precinct 09A. Wait times greater than 1 hour. Machines keep ‘overloading’ and no one coming out. People having to leave for work. Does this count as voter suppression? Now being told to turn my phone off because it may interfere with voting machines."

Another Georgia voter tweeted that the voting machines in her precinct went down and voters were as such required to cast paper ballots: "Polling machines down in Gwinnett County and volunteers say they’ve never experienced this before. Ballot card machines aren’t working. We’ve been offered paper ballots. Majority of the line has been here since 7am".

According to The New York Times, problems with voting machines were pervasive outside of Georgia as well:

In Gwinnett County, Ga., four precincts — out of 156 — suffered prolonged technical delays, while some voting machines in South Carolina lacked power or devices needed to activate them.

There was also confusion in Allegheny County, Pa., which includes Pittsburgh, where at least four polling places were changed in the last two days.

And in Chandler, Ariz., a Phoenix suburb, voters who went to a polling place in the Gila precinct found the doors locked and a legal notice stating that the building had been closed overnight for failure to pay rent. (Officials later reopened the location.)

Yet the situation in Georgia is particularly conspicuous in part because of the controversial actions of that state's Republican gubernatorial candidate, Georgia Secretary of State Brian Kemp. As Palast told Salon last month, "Brian Kemp, Georgia’s secretary of state, purged 550,702 Georgians from the voter rolls in 2016 and 2017 — that is, canceled their registrations. I’m not guessing. After much resistance, Kemp turned over the names and addresses of each one of these purged voters in response to a threat of a federal lawsuit (which I filed in federal court in Atlanta and served on Kemp Friday). Of these, we are certain that 340,134 were wrongly removed, with no notice that they were purged."

There have also been problems in Georgia on voting day that do not correspond to voting machines going down or there being unusually long lines. Many Georgia voters have experienced problems because their voting addresses don't match their precincts, according to the Atlanta Journal Constitution. As the publication wrote, "In some cases, voters said they re-registered with a new address, but they still encountered problems at the polls. Another voter said he had always voted in the same precinct but was told this year that the address had changed. The incidents might have been caused in part by poll workers looking up voter information incorrectly, said Candice Broce, a spokeswoman for the Georgia Secretary of State’s Office."