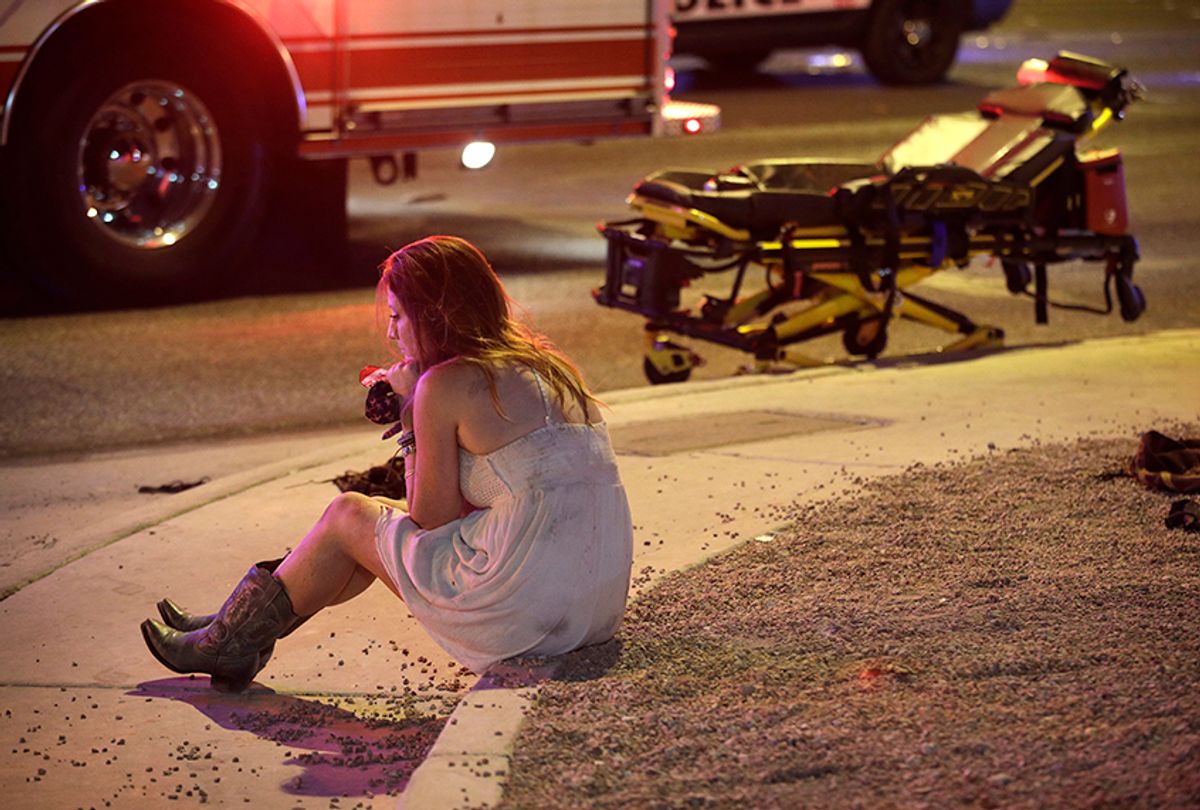 There has been another mass shooting in America. Twelve people were killed late Wednesday by a U.S. Marine veteran in a shooting at a country and western dance hall in Thousand Oaks, Calif., that was hosting a "college country night" for students, authorities said. The victims included a sheriff's sergeant and survivors of America's deadliest mass shooting in America.

"This community in my 41 years has never experienced anything like this," he said.

Pepperdine University, in nearby Malibu, said it believed some of its students were at the bar. It said it was working "to identify and provide support to those students." Some of the people who were inside the bar also survived last year’s mass shooting in Las Vegas.

"A lot of people in the Route 91 situation go here," Chandler Gunn, 23, told the Los Angeles Times. "There’s people that live a whole lifetime without seeing this, and then there’s people that have seen it twice."

Carl Edgar, 24, said he had friends survive the Vegas attack at a  country music festival shooting that left 58 dead in October 2017 as well as this one in the country-western themed bar in Thousand Oaks, Calif.

"If they survived that, they’ll survive this," Edgar told the Times.

The suspected shooter was found dead at the scene from a gunshot wound, and Dean said is unclear who killed the suspect. "We don't know who shot anybody at this point," the sheriff said.

Dean named the suspect as Ian Long, 28, who is a veteran of the Marines. The sheriff said he has a history of run-ins with the police, as recently as April this year when officers were called to his house after reports of a disturbance.  The sheriff also said Dean was a victim of a battery at a local bar in 2015.

Long was "somewhat irate," and "acting a little irrationally," Dean said, but he was assessed by a mental health specialist who cleared him and didn't feel further action could be taken. Other than that, law enforcement officials have had "several contacts" with Long over the years, which Dean described as "minor events," such as a traffic collision.

Dean said the weapon Long used was Glock 21 handgun with an extended magazine, which law enforcement officials believe was legally purchased. Dean said it was too early to determine whether there was any link to terrorism. It is not yet known if the gunman took his own life, authorities said.

President Donald Trump said in an early morning tweet that he had been "fully briefed" on the "terrible" shooting. In a subsequent post, he said the police showed "great bravery."

"God bless all the victims and families of victims," he said.

Dean identified the slain sergeant as Ron Helus, a 29-year law enforcement veteran with a wife and son who was looking to retire in the next year.

"Ron was a hardworking dedicated sheriff's sergeant. He was totally committed, he gave his all and tonight, as I told his wife, he died a hero. He went into save lives, to save other people," Dean said.

Helus, 54, arrived at the scene alongside a colleague from the California Highway Patrol within three minutes of reports of shots being fired at around 11:20 p.m. on Thursday, Dean said.

After hearing more gunfire, Helus and the Highway Patrol officer charged into the building and Helus "was shot multiple times," Dean said. The other officer dragged Helus out of the line of fire, but he died in the hospital hours later, the sheriff said.

A SWAT team, FBI and others officers arrived soon after. When they entered the building they found 11 people dead.

"They found people hiding in restrooms, people hiding in attics," Dean said. Other witnesses described people using bar stools to break windows and escape. "It's a horrific scene in there, there's blood everywhere."

Several witnesses reported seeing what they described as smoke bombs going off inside the venue, but authorities said they could not confirm that.

Between 10 and 12 people suffered injuries of varying severity, others with more minor wounds escaping and taking themselves to local hospitals, Dean said.

NBC News reports Borderline Bar & Grill opened in 1993 and considers itself as a "haven for country line dancing folks of all ages." The venue reportedly hosted many famous acts, including The Beach Boys. The news outlet also pointed out that Thousand Oaks was ranked the third-safest city in the United States this year, according to the data analysis website Niche.

The shooting in the Los Angeles suburb is the 307th mass shooting in the United States this year, according to the Gun Violence Archive. It comes a little more than one week after the Pittsburgh Tree of Life synagogue shooting, where 11 people were gunned down in an apparent hate crime.