The general fled Manila Bay to avoid being captured by the Japanese army, promising to return. It would take years 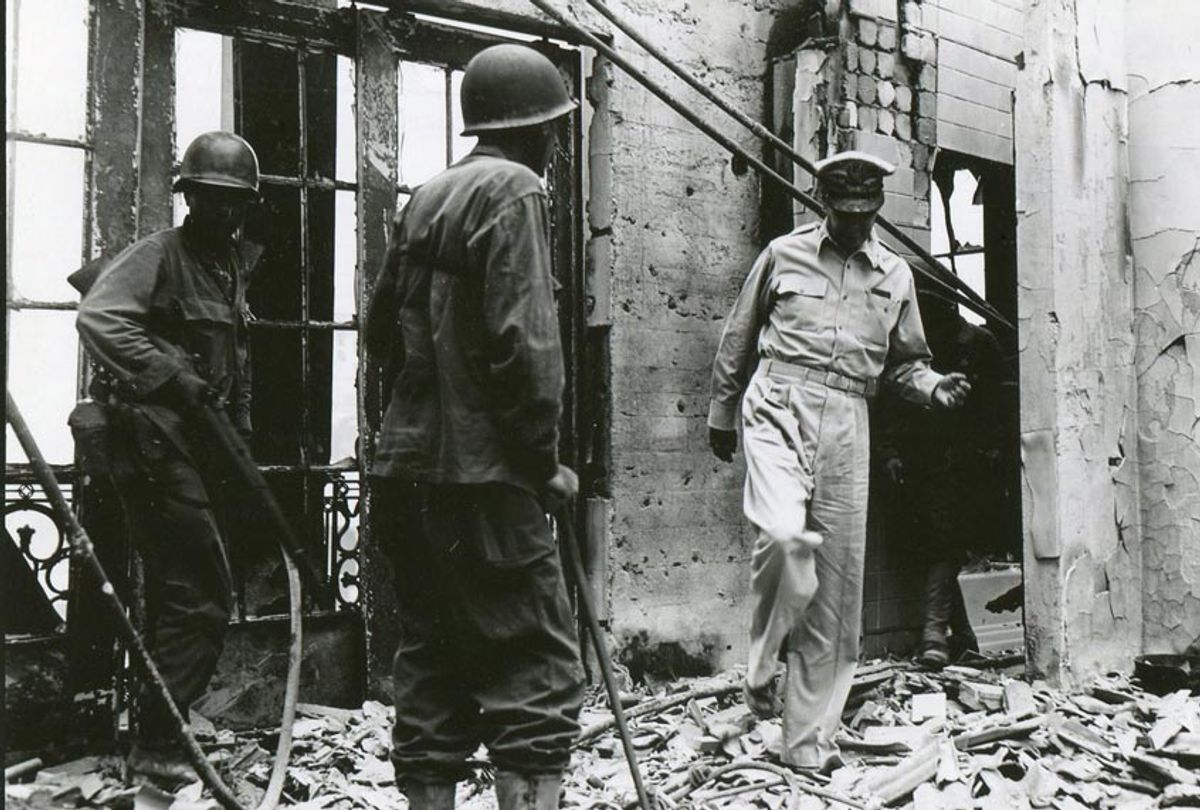 Amid the fighting for the Walled City, MacArthur returns to the ruins of his home atop the once-luxurious Manila Hotel on February 23, 1945. (National Archives)
--

“I consider him an officer of most brilliant attainments.”
—Maj. Gen. Charles T. Menoher, Efficiency Report on Douglas MacArthur, August 28, 1919

Gen. Douglas MacArthur walked out onto the porch of his cottage on the battered island of Corregidor in the early evening of March 11, 1942, joining his wife Jean and the couple’s four-year-old son, Arthur — all packed for that night’s perilous escape. The sun had just slipped below the western horizon, silhouetting the nearby Bataan Peninsula where the dormant volcano Mount Mariveles towered majestically almost five thousand feet over the South China Sea. A tropical breeze whipped across Corregidor, one typically filled with the acrid smell of cordite from Japanese bombings and artillery, which had finally let up after a long day of attacks along the waterfront. This tadpole-shaped island that guarded the entrance to Manila Bay had served as MacArthur’s last refuge, under siege now for ninety-three days by advancing enemy forces.

The toll of the war showed on the sixty-two-year-old general. The five-foot-ten MacArthur had shed nearly twenty-five pounds on a diet of half rations. His normally close-cropped and thinning hair, which he often hid under his officer’s hat, had grown long, and his face was coarse from weeks of shaving with saltwater. Despite that, MacArthur had still insisted each day on dressing in a pressed uniform and shined shoes, a small gesture of normalcy in an environment that deteriorated by the hour. But none of it mattered now as a lone truck grumbled up the bomb-cratered road to retrieve the general and his family for the trip down to the dock. MacArthur’s besieged garrison would soon fall. The promised reinforcements had never arrived, and each day the Japanese noose tightened. If he did not leave tonight, MacArthur might never escape.

A patrol- torpedo boat was moored alongside Corregidor’s north dock barely a half mile away, ready come nightfall to take the general, his family, and a few senior staffers on a high- speed run south to break the Japanese blockade of the island. Three other navy patrol boats would simultaneously depart Corregidor and Bataan, carrying additional officers on MacArthur’s staff for a total party of twenty- one. If successful, this small flotilla would carry the general and his entourage some five hundred miles south over two days to the lush island of Mindanao, where B- 17 bombers dispatched from Australia would pick them up at a Del Monte pineapple plantation and fly them to the port city of Darwin. Just as he had told those who had escaped before him, MacArthur knew that the next time he saw the sun, he would be in a whole new world.

The half- ton truck rolled to a halt in front of the gray cottage, where blankets tacked up inside the windows had served as primitive blackout curtains. Only two days earlier MacArthur had sat in the wicker chairs on this same porch with Maj. Gen. Jonathan Wainwright, his wiry second- in- command who answered to the nickname Skinny. That afternoon MacArthur had leveled with Wainwright, informing him that President Franklin Roosevelt had ordered him to evacuate to Australia, a move designed to rob the enemy of the propaganda victory of capturing one of America’s most famous generals. Wainwright would remain behind in charge and fight to the end. “I want you to make it known throughout all elements of your command that I’m leaving over my repeated protests,” MacArthur had instructed his subordinate.

“Of course I will, Douglas,” Wainwright had promised.

“We’re alone, Jonathan; you know that as well as I,” he said. “If I get through to Australia, you know I’ll come back as soon as I can with as much as I can.”

“You’ll get through,” Wainwright assured him.

“And back,” MacArthur had insisted.

The general shot a glance at his watch this muggy Wednesday evening, which read seven- fifteen p.m. The patrol boat would depart in just fifteen minutes.

MacArthur could delay no longer.

“Jean,” he finally announced. “It’s time to mount up.”

The general’s escape capped a brutal and frantic three months. In December 1941, after the Japanese wiped out America’s air and sea power, MacArthur had ordered the evacuation of Manila, hoping to spare the Pearl of the Orient from destruction. Workers had emptied the capital’s bank vaults of cash, gold, and securities, while the American high commissioner had pulled down the flag, broken the official seal, and ordered his new air- conditioned car pushed into the bay. The general had no choice but to abandon his own luxurious home in the penthouse atop the Manila Hotel, leaving behind his prized library of some ten thousand volumes, his family silver valued at more than $30,000, and even young Arthur’s baby book and birth certificate. MacArthur’s forces had fallen back to the Bataan Peninsula and the fortified island of Corregidor, where the general had set up his headquarters in the network of underground tunnels carved deep into the rock. Japanese bombs and artillery had since reduced the lush 1,735- acre island to a barren wasteland, where all that survived of most of the aboveground barracks, offices, and even the hospital were skeletal concrete remains held together by rebar.

Conditions proved far worse for the majority of MacArthur’s troops fighting out in the open across the dark waters on Bataan with little more than shallow foxholes for cover. Hunger had forced soldiers there to slaughter and choke down the cavalry’s mules and horses, while swarms of mosquitos and flies had spread everything from dengue fever to dysentery. Exhaustion had felled those lucky enough to dodge disease. “Malaria and malnutrition,” observed Associated Press reporter Frank Hewlett, “put more soldiers out of service than Jap bullets.” Other times Japanese soldiers crept behind Allied lines at night to kill American and Filipino forces, often disemboweling them. “More frequently, the men’s genitals were stuffed in their mouths,” wrote Steve Mellnik, a captain and artilleryman on MacArthur’s headquarters staff. “In one case a victim regained consciousness and begged for a bullet to end his agony!”

The general’s starved and battle- weary soldiers on the peninsula quipped that the V chalked on their helmets stood not for “Victory” but for “Victims.”

For months, the enemy had humiliated the impotent MacArthur, dumping thousands of leaflets on his forces. “Sir, you are well aware that you are doomed. The end is near,” Japanese Gen. Masaharu Homma wrote in one missive addressed directly to MacArthur. “The question is how long you will be able to resist.”

Tokyo Rose likewise had aimed her demoralizing broadcasts at the general’s troops. “You’re out on the end of a 6,000- mile limb. The Japanese Imperial Forces are sawing that limb in two,” she warned. “Get smart and give up.”

The Japanese and the Germans had mocked MacArthur in other shortwave broadcasts, paying tribute to his struggle as a way to embarrass the United States. “In the name of fair play and chivalry,” one broadcast trumpeted, “the Japanese nation demands that the United States give General MacArthur the reinforcements he needs, so he will be able to wage a war that would be to his satisfaction, win or lose.”

MacArthur’s once- heralded courage that had made him the most decorated American soldier of World War I was now aped by his own men, who called him “Dugout Doug,” a ditty sung to the tune of “The Battle Hymn of the Republic.”

Dugout Doug MacArthur lies a shaking on the Rock,

Safe from all the bombers and from any sudden shock.

Dugout Doug is eating of the best food on Bataan

And his troops go starving on.

But tonight it would all end.

MacArthur rode in silence from his cottage down to the dock, leaving a trail of dust like the tail of a comet. Mellnik watched as the general climbed down out of the cab. “He removed his droopy garrison cap and turned to peer into the darkness. Involuntarily, we peered with him. But there was nothing to see,” Mellnik wrote. “The grim battlefield of Bataan was only a dark blur against the sky to the north. Far-off Manila made a dull glow on the horizon in the east. Across ten miles of mined waters to the south lay Cavite Province. And to the west lay the China Sea.”

The general made his way through the rubble toward the pier, where a few men formed a line to see him off. “Goodbye and God bless you,” some murmured.

MacArthur paused to shake each man’s hand; a few sobbed, no doubt realizing that his departure symbolized what many had come to fear, that this was the end.

Several senior officers had come down to bid him farewell, including Maj. Gen. George Moore, who was in charge of harbor defenses.

MacArthur helped his family into the boat, where Arthur clutched his white stuffed rabbit, nicknamed Old Friend. The general then turned for a final look up at the scorched rock fortress. “Gone was the vivid green foliage, with its trees, shrubs, and flowers,” he noted. “Gone were the buildings, the sheds, every growing thing.”

The general’s eyes fell upon his troops, who stared at him in silence. In addition to his suitcase, musette bag, and walnut cane, MacArthur would take his wife Jean and son Arthur, the two most precious people in his life. He would leave behind thousands of husbands, sons, and brothers of families back home in America.

Families that had trusted him.

Those men would soon face the horrible Death March, followed by years of torture and beatings at the hands of the Japanese. Others would die of starvation, malaria, and dysentery or be crammed inside the bowels of Japan’s notorious hellships. Beyond his troops, MacArthur’s precious city of Manila was doomed to a brutal three- year occupation that would lead to mass starvation and even the plundering of cemeteries as desperate residents robbed the dead of jewelry, clothes, eyeglasses, and dentures— anything that could be bartered or sold for a few pesos to buy a fistful of rice.

The general raised his cap in a farewell salute. “The smell of filth thickened the night air,” he wrote. “I could feel my face go white, feel a sudden convulsive twitch in the muscles of my face.” On the boat, Jean watched her husband, noting his pained expression. “He was just heart broken,” she recalled, “just heart broken.”

MacArthur grabbed a piling and climbed down into the boat. “You may cast off, Buck, when you are ready,” he told the skipper, Lt. John Bulkeley.

Bulkeley fired up the boat’s three 1,500-horsepower engines. Corregidor’s searchlights had gone dark, and diversionary fire from the island’s guns would soon draw the enemy’s attention, allowing MacArthur to escape. Bulkeley guided the seventy- seven- foot boat away from the concrete pier and aimed out to sea to rendezvous with the others. As Corregidor receded in the boat’s frothy wake, MacArthur made a solemn promise, one he would announce to reporters upon his safe arrival days later in Australia, a vow that would drive him as the weeks turned to months and then years.