Progressives, moderates and (most of all) pundits: Get over yourselves, already?

This election wasn't about "left" and "center." It was about whether or not America has a future. Answer: Maybe! 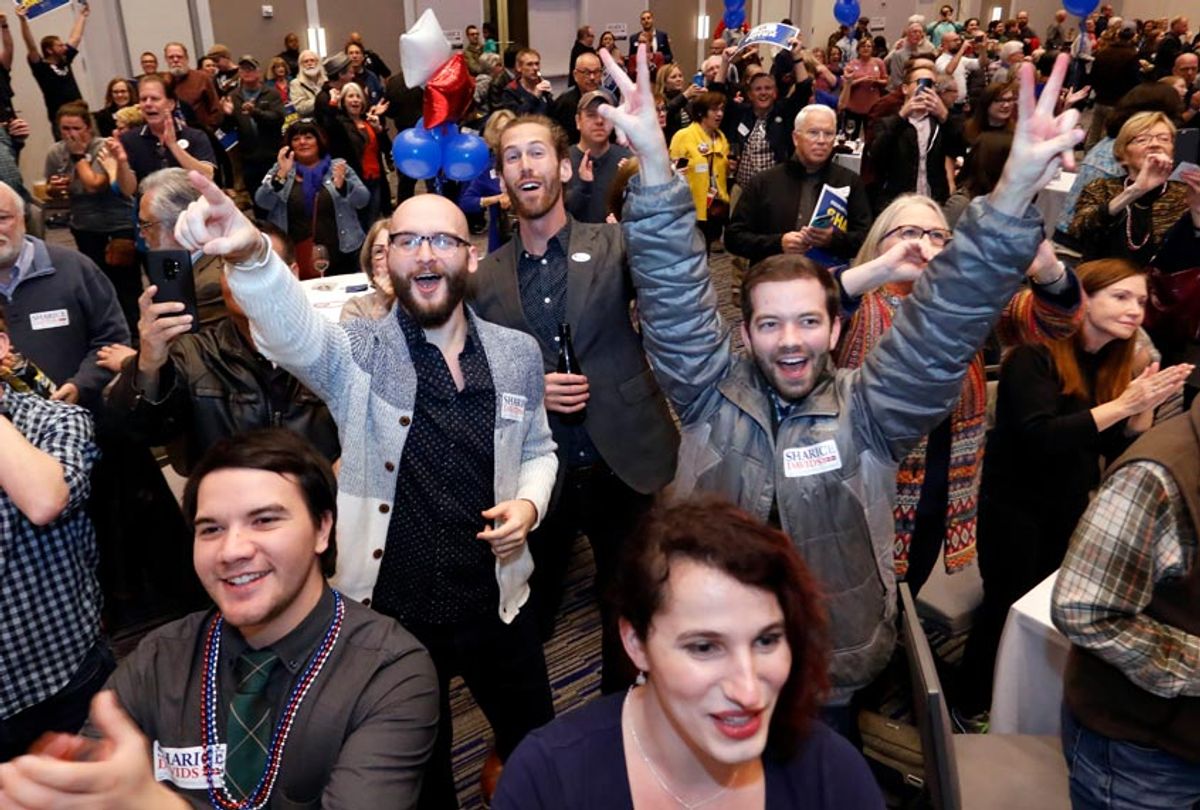 What if we had an election and nobody won? Or rather, what if nobody could agree about who won? We entered a new phase of the post-truth cycle this week with the 2018 midterm elections, an event whose outcome was clear enough but was immediately swamped — indeed, swamped in advance — by half-baked instant analysis, cherry-picked evidence, partisan talking points and the apparently universal need to construct a narrative whose principal purpose is to make the teller appear wiser than other humans.

Apparently still scarred by its humiliating miscalculations during the 2016 presidential campaign, the American political media did nothing to improve matters during the week just past. If anything, the talking-head caste compounded its sins in nearly hilarious fashion, overcorrecting desperately in a vain effort to stay ahead of the news. As Reed Richardson of FAIR has observed, minutes after the first results came in from a handful of midterm races, around 8 p.m. Eastern time on Tuesday, cable-news analysts began soberly pronouncing that the Democratic “blue wave” was a bust. My Salon colleague Sophia Tesfaye blames this particular brain-virus on James Carville, but the infection spread rapidly throughout the punditry, from Van Jones to Jake Tapper to Geraldo Rivera.

Nate Silver’s predictive chart at FiveThirtyEight — which earlier in the day had the odds of a Democratic House majority close to 90 percent — suddenly decreed that Republicans were likely to retain control of the House, and liberals across the country began experiencing PTSD flashbacks to November of 2016. Then Silver announced on Twitter that his model was overly “aggressive” and began steering it back in the other direction. Well before 10 p.m., “red wall” panic had begun to fade and several major news organizations were predicting that Democrats would in fact win a majority, as indeed occurred, although virtually no one would accurately estimate the size of that majority for another 24 to 48 hours.

All this whipsawing happened within less than two hours, and — to repeat the most important point — was based on very little hard evidence. Early Republican victories in Kentucky, Indiana, Tennessee and Texas, along with apparent or probable victories in Florida and Georgia, were treated as signifiers of a national trend rather than as facts whose larger meaning was not yet obvious. As it gradually became clear that Democrats were going to win in lots of other places, the result was a collision of competing memes, soundbites and narratives that became the story in themselves, and seemed to render the task of reporting the actual news unimportant or unnecessary. Meanwhile the polls were still open in one-third to one-half of the nation, and actual citizens were casting ballots in many of the most important races.

I can’t say things got measurably better during the post-game analysis on Wednesday and Thursday. Mundane questions about what what had happened and what might still happen — such as the fact that the big races in Florida and Georgia had not actually been decided, that prominent pro-Trump conservatives in such deep-red venues as Kansas, Oklahoma and South Carolina had been defeated, and that several congressional contests on the West Coast might not have clear winners for days or weeks — became subsumed by the need to create or control the narrative.

Was this a wave election or barely a ripple? Had the “progressive” insurgency within the Democratic Party been crushed at last? (For the pundit class, any and all events will serve as evidence of that.) Was opposing Brett Kavanaugh’s confirmation a massive strategic error that cost Democrats the Senate? What had the two parties learned about the all-important task of winning the votes of downscale white folks in Michigan, two years from now?

It’s no surprise that Donald Trump pronounced the midterm result to be a huge personal victory, which is of course preposterous, and which the president’s erratic and enraged behavior over the last few days suggests he does not believe himself. (Yes, Mr. President, you won big in North Dakota. Congratulations!) One would expect nothing less from him, but the trollery extends well beyond the troll-in-chief.

Bret Stephens of the New York Times, whose elaborate long con involves lecturing conservatives for supporting Trump and lecturing liberals for being liberals, perhaps took the prize with his Thursday column announcing that the midterm results were a “warning to the Democrats.” This was identical to Stephens’ usual warning, which is that Democrats ought to be less like Democrats and more like Republicans if they ever want to win anything -- as if that had not been core Democratic strategy for the last 30 years, and had not resulted in an endless litany of defeat. The level of Jedi mind trickery or sheer brazenness required to make this argument the day after a big Democratic win is impressive.

Stephens writes that the 2018 election was “at most, a very modest rebuke” to Trump and that “the 28-seat swing that gave Democrats control of the House wasn’t even half the 63 seats Republicans won in 2010.” That is A) an invidious comparison that fails to take account of massive partisan gerrymandering and the unique vulnerability of many Democrats in 2010, and B) false. Interestingly, Stephens appears to have edited his column post-publication to acknowledge that the Senate race in Arizona has not been decided, but has declined to make clear that his count of Democratic gains was at least 30 percent low. (As of Saturday morning, Nate Silver estimates a total Democratic pickup of 38 House seats.)

Stephens has an ideological axe to grind — but one could say I do too, and I don't think that justifies intellectual dishonesty for either of us. Even people who ought to know better, or who actually do know better, have been seduced by the post-midterm meta-narrative -- and even more, I suspect, by the defensive desire not to underestimate the supposed Machiavellian genius of Donald J. Trump. D.D. Guttenplan of the Nation, nearly always a clear-eyed analyst, wrote a rushed and simplistic commentary suggesting that Democrats’ anti-Trump strategy had led to “stinging losses” and that “anyone hoping to ride the once-promised blue wave has been left high and dry.”

I’m not disputing that the unexpectedly one-sided defeats of Joe Donnelly in Indiana and Claire McCaskill in Missouri, and the apparent or likely defeat of Andrew Gillum in Florida (we still don’t know how that state’s Senate race will turn out), are sobering data points as we reckon with America’s political future. But those results are very much subject to interpretation, and could fairly be said to point in different directions. As Guttenplan observes, Donnelly and McCaskill positioned themselves as Republican-adjacent moderates in red states. No Democrat in the entire country, not even West Virginia’s lizard-like Sen. Joe Manchin, ran as overtly Trumpy a campaign as McCaskill did. They got creamed, whereas Gillum ran as a progressive change agent in an increasingly diverse purple state and came agonizingly close to winning.

Am I at risk precisely the same error I perceive in others: My analysis is trenchant, wise and realistic; everyone else’s is naïve and deluded! Clearly. I am not arguing that progressives carried the day on every front, because that is certainly not the case. Both the establishment center and the insurgent left should get credit for collaborating well enough to enable a sweeping Democratic victory — because that’s what it was, pretty much — aone that was undeniably complicated by undertow, backlash and bitter division.

For my money, Nate Cohn of the Times and Jonathan Freedland of the Guardian have written the two best summaries of what actually happened on Tuesday and how to understand it. It’s not accidental that they both waited almost two full days before rendering a verdict; it also might not be accidental that Cohn primarily relies on a deep dive into objective data, and that Freedland is writing from across the Atlantic, outside America's Trumpian reality-distortion field.

On the same day Cohn’s article was published, Times columnist Thomas B. Edsall, who remains one of the best reasons to subscribe to that paper, allowed himself to get sidetracked into a “moderation must prevail” argument partway through a fascinating summary of post-election tea-leaf readings by political experts. Political scientist Matt Grossmann pitched Edsall a case against “extremism” on both sides, arguing that progressive insurgents had fared worse than “establishment” Democrats in House races and that “far left” candidates like Gillum in Florida and Stacey Abrams in Georgia had cost the Democrats potential victories.

I think the fairest summary of that argument is that it’s a mess: Every one of those definitions is disputable, the evidence is cherry-picked and not entirely correct and I’m guessing Grossmann now wishes he hadn’t said any of that. One of the supposedly losing “insurgents” he cites may end up winning (Katie Porter, in California’s 45th district), he skips over several other progressives who won in purple districts (like Sharice Davids in Kansas, Colin Allred in Texas and Lucy McBath in Georgia), and it’s a major stretch to characterize Gillum or Abrams as being “far left.” (Unless that's a euphemism for a quality they share that may well have turned off some voters in their states.)

But, again: I think the problem here is much larger than the fact that Betomania and Gillum fever were overstated, or that Tuesday evening’s “no blue wave” Cassandras were operating on partial and flawed information, or that the New York Times’ Vibrating Needle of Doom is nothing more than a trauma-inducing bullshit meter. Those things are symptoms of a central problem of our age, which afflicts all of us: Nothing ever just happens.

What I mean is that events do not even appear real until they become part of internet discourse, until they can be fitted into the media narrative or political diatribe or grand conspiracy theory that “we” (whatever subgroup of like-minded people that may describe) choose to tell each other. The real world becomes a messy and often unfortunate distraction, to be sporadically raided for evidence that supports whichever version of mythology we already believe.

One could describe this as the ultimate fulfillment of all those 20th-century cultural theories about the dialectic of Enlightenment and the society of the spectacle and so on, or even as the media-age version of Plato’s cave, where shadows seen by firelight come to replace reality. Or we could dial all that down a little and reach two overlapping but not entirely contradictory conclusions.

One of those is that American politics are highly dysfunctional and our society remains bitterly divided, and these problems will not be easy to solve. Another is that this week’s remarkable events mean something. If we give them water, oxygen and time to unfold, we may find out what.