First Waco, now you: Chip and Joanna Gaines are fixing up America next 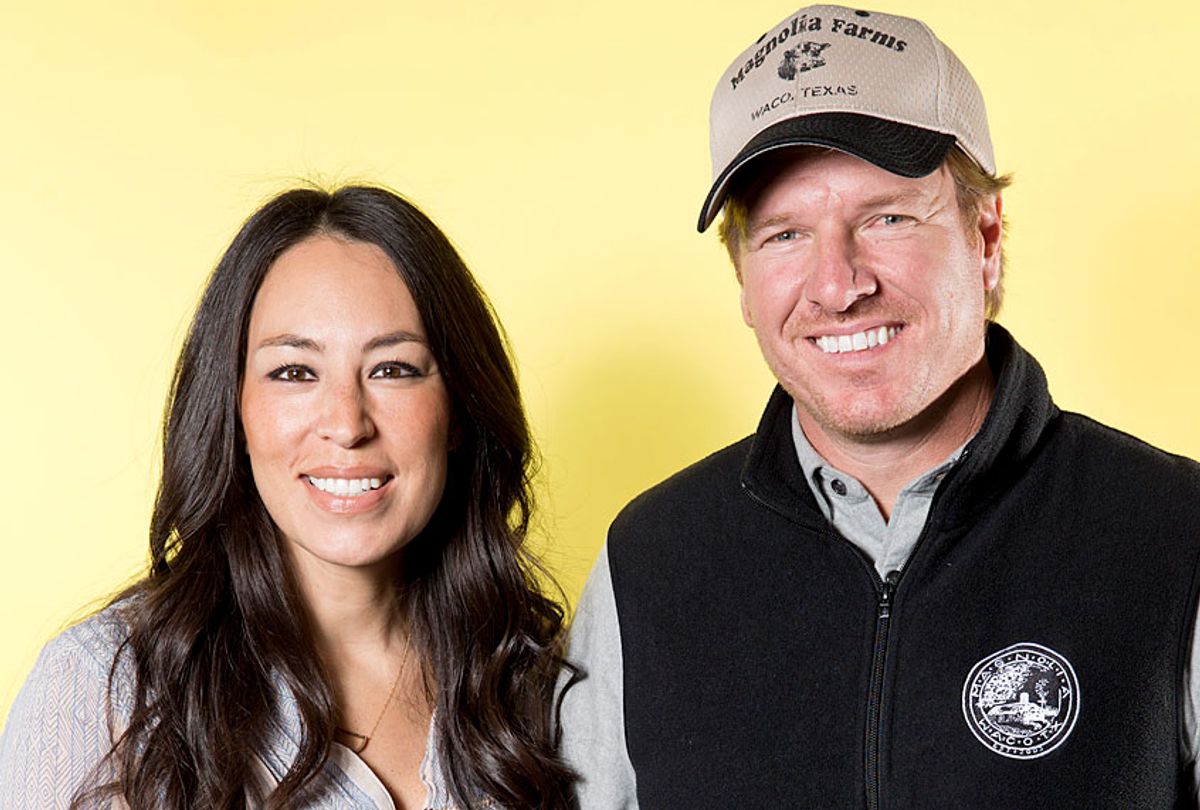 At some point in the near future Joanna and Chip Gaines, formerly the stars of HGTV's erstwhile hit "Fixer Upper," will have their own cable channel to renovate, part of Discovery's broad umbrella of networks.

If you don't understand the significance of that, we don't blame you. But it also means you haven't been immersing yourself in the soothing bath that is home improvement television, possibly the most effective, low-cost mood stabilizer that exists.

Discovery recently acquired Scripps Networks, the parent company to HGTV and Food Network, among other channels. Whichever vertical becomes the base for the Gaines and their Magnolia brand may reach as many as 60 million viewers.

The terms of the Gaines' deal with Discovery still isn't clear. But consider the deal Oprah Winfrey struck with Discovery that resulted in a boost for OWN, now the home for the mogul's brand of inspirational, spirit-rehab programing in addition to critically-acclaimed originals such as "Queen Sugar" and "Greenleaf."

Oprah still sells optimism via her "SuperSoul" series and peddles ugly pajamas and truffle-infused condiments under her Favorite Things seasonal imprint. In case you weren't aware, the 2018 edition is currently available on Amazon.

If the couple scores anything close to that gig, they'll stand astride one of the more influential aspirational brands on TV. As Waco, Texas has gone, so may our nation.

Few modes of programming are as endlessly soothing as renovation TV, shows in which attractive people sledgehammer their way through rotted-out drywall, eventually transforming structural disasters into heavenly dwellings. They are a metaphor for the American ideal of revamping dilapidated structures into a new versions of greatness.

Does that phrasing make you cringe? These shows exist, and thrive, as curatives for that discomfort. For what is more calming that the image of a flawlessly feathered, tastefully cushioned and altogether orderly nest?

Here's a hint: It's in the title. With the rising levels of bigotry and discord fueling mass violence, with parts of the country being swallowed by fire, rarely has claiming a calm, organized corner of the world felt more necessary. With the right shade of paint, upcycled vases and airy interior space, you too can live out your days nestled (or hidden) in your well-appointed home (or bunker).

According to a Variety report the Gaines' channel and its companion streaming service are expected to be part Discovery's makeover of DIY or Great American Country, aka the "Flea Market Flip" channel. In a manner yet to be established, this new network may assist comfort preppers not only with bedecking their oases in shiplap, but unplugging from the woes foisted upon us by a tacky, gold leaf-obsessed stooge.

Hush, shh, don't think about that! Imagine, instead, an entire channel dedicated to sourcing reclaimed wood or hand-forged dinner bells. Steep yourself in the fantasy open floor plans, where every bathroom holds a dog spa and every spacious kitchen comes with its own pot-filler.

This is living as realized by the Gaines family. Chip and Jo. We're all on first names with them now.

Much as this may sound like heresy to their fans, the Gaines aren't breaking new ground so much as capitalizing on the latest version of hearth and home fetishizing, established and mythologized by Martha Stewart in the '90s.

Back when this egg was fresh, we referred to this trend as "cocooning," a term popularized by Faith Popcorn in 1991, three years prior to the official birth of HGTV. As the attraction to and ratings for home improvement programming blossomed, particularly post-9/11, the market for kitting out one's interior surroundings expanded. The renovation craze begat stables full of celebrities who fanned out and now populate shows on networks across the viewing spectrum.

Granted, what the Gaines sell is far more attainable to the average person than most of what Martha was peddling from Turkey Hill. The flipside of this is that home ownership feels more like a fantasy in 2018 than it was even a decade ago.

Debt-strapped millennials are less likely than previous generations to seek large houses, or even ones with a large yard, let alone hold on to family heirlooms. On the plus side, that makes garage and estate sales, favorite hunting grounds of Joanna Gaines, far more target-rich environments.

And, in truth, "Fixer Upper," currently living an afterlife on Hulu, feels like more of a boomer- and Gen X-targeted show, its Etsy-ness notwithstanding. If you live in a city where the median price for real estate sits at $350,000 and above imagine, if you will, attaining an acre of land for $12,500.

Now: picture the jovial Chip and the creative Joanna transforming the shack that sits on that desolate property into a sweet cottage, complete with outdoor dining space on the back porch, for well under $200,000.

Guess what? They did that! Sure, it was for the series' producer and his wife . . . but still!

The fact that the Gaines announced their return on a recent episode of "The Tonight Show Starring Jimmy Fallon," the most apolitical of the high-profile broadcast late night hosts, is no accident. Right now they lead the modern class of celebrity "makers," lifestyle gurus peddling the virtues of success hard-won by entrepreneurial bootstrapping.

Winning that game entails welcoming everybody and offending no one.

Episodes kick off with Joanna and Chip enjoying family time with their two boys and two girls. This usually involves a lesson in commerce, as we see the children at work, making something or watching something being made. Part of the Gaines' legend is the large number of animals they have on the farm, include a passel of darling chicks the kids care for — not as pets, but to sell.

Not only do Chip and Jo promote their success and wear their pride in their community (one in which they have substantial investment) on their sleeves, the pair remains conscientiously values-oriented and thrifty.

This is why the couple broke so many hearts by abandoning their HGTV hit, going out in April while the ratings were still high, in order to have time to welcome their fifth child, Crew, into the family. Other HGTV hosts feel like punchlines in comparison.

Its other celebrity couple, "Flip or Flop" hosts Christina and Tarek El Moussa, aired out their divorce in the tabloids, including an event in which the police were called to their house "in an abundance of caution," as explained in an official statement. Despite their marital woes, the El Moussas' show will go on.

In contrast, the Gaines will have an entire channel of family friendly programming to cultivate.

Is this an alert? Something to celebrate? A warning? Hard to say.

For those who indulge in renovation binges on the regular — entering the plea of guilty, Your Honor — the Gaines can be something of an acquired taste. Chip, the can-do contractor, is unrelentingly hammy, as if some fairy godmother magicked a loyal Labrador into a human male. Joanna, an interior designer, plays the balance to his antics by shaking her head and rolling her eyes at all of Chip's wacky physical humor. Their aesthetic and ethos are family-centered.

As chronicled on the HGTV series that aired from 2014 through 2017, their willingness to dig in and get dirty has beautified Waco to the point that it is less synonymous with David Koresh and the Branch Davidians, the sexual assault scandal that rocked Baylor University or any number of crimes that have happened since, than with the Gaines' family values-centered empire.

The Gaines have made the town into a tourist destination attracting some 1.6 million in 2017, according to the Dallas Morning News. In Texas terms, that means fewer people dropped by the Alamo that year than visited a town whose population, according to recent census statistics, is around 136,436.

I believe it. My introduction to the couple was by way of my recently widowed mother-in-law, who asked for me and my husband to join her on a fantasy trip to Gainesville . . . excuse me, I mean Waco. We would have indulged the notion if not for her requirement that we rent The Magnolia House, a Gaines renovation that is now one of their vacation rental properties, for a week. Interested? It's available for the low, low price of $1390 a night.

Vacation in Europe is cheaper. Or honestly, just buy a few items from their Target line or repaint a room in a warm greige from Joanna's line with Kilz paints. Slap up some shiplap.

For people like my mother-in-law, none of those alternatives will suffice. (OK, that's not entirely true; as it turns out, the Europe compromise did the trick.) The reason pilgrims flock to Waco, and the reason the series finale of "Fixer Upper" attracted nearly 5 million viewers in the week that it aired — making it one of the most popular telecasts on cable — is that people want to feel close to the Gaines family as much as they want to emulate them.

You can get anything sold at Magnolia Market at the Silos, ground zero for the couple's merchandising empire, in a local store. Especially if your only local store happens to be Target. But why? After all, your neighborhood hardware and gardening center probably isn't located near tour companies that will swing you past any of the fine houses that star in "Fixer Upper."

The telegenic couple's story is that of two plucky entrepreneurs who fell in love, teamed up and take run-down houses in a setting long synonymous with misfortune and make them into paragons of beauty. All that, while raising a basketball team (with a great deal of hired help) and hewing closely to their Christian values.

Therein lies the secret to their appeal. Aside from marrying their talents and charisma to create a very lucrative lifestyle brand, the Gaines are the new standard bearers for the storybook version of the American dream, a vision that still holds sway over their audience.

But there's a not-so-attractive aspect to their portrayal of that dream that the Gaines would be wise to address, and correct, in programming this new venture. The recipients of "Fixer Upper" makeovers were mostly white couples, and all heterosexual. HGTV, like "Fixer Upper," is a popular network across every cultural stratum, including among LGBTQ viewers.

The Gaines also sustained criticism in late 2016 when a Buzzfeed article revealed that the couple is part of Antioch Community Church, led by a pastor who is against same-sex unions. Initially the couple refrained from saying whether they agreed with those views, but in January 2017 Chip posted a blog entry on the Magnolia website stating, "we care about you for the simple fact that you are a person, our neighbor on planet earth.

"It's not about what color your skin is, how much money you have in the bank, your political affiliation, sexual orientation, gender, nationality or faith," he says. "That's all fascinating, but it cannot add or take away from the reality that we're already pulling for you."

Holding a big tent view is best for business. One truth the entire lifestyle industry learned from the triumphs and tribulations of Martha Stewart is the risks of welding one's brand to one's personal image.

The Gaines family is as wholesome and normal as one is likely to get in an era bereft of squeaky-clean celebrity families. It's headed by a devoted dad loyal to a mom who works by his side, who never is asked to dim her shine to make his light seem brighter. Their young kids seem happy, and the pair makes their investment in their well-being known.

And their entire mandate is based on taking run-down structures on the brink of collapse and renewing them, inviting a second life that embraces entertaining and togetherness.

Unironically, they sell hope. A channel full of that has some appeal. Until it arrives, be content with sprucing up our sanctuaries as bulwarks against chaos.