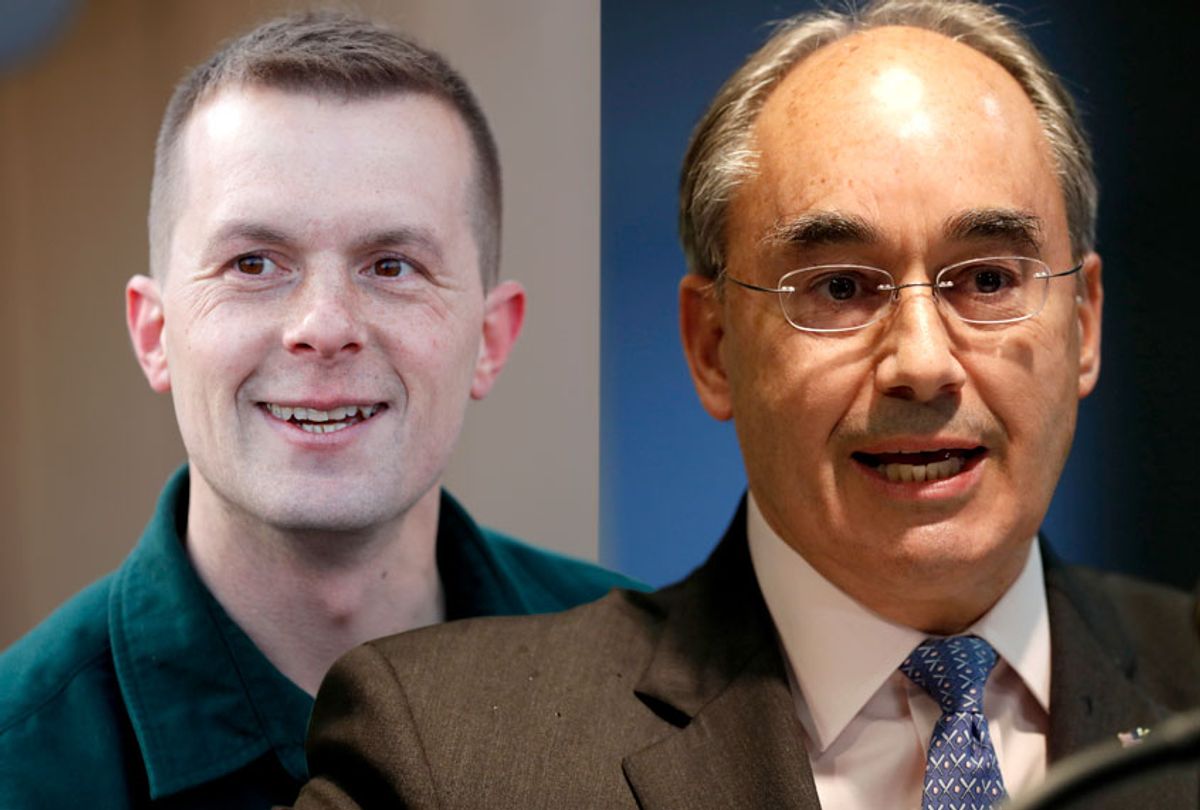 Maine's 2nd Congressional District just saw the first race in American history in which one congressional candidate prevailed over another due to ranked-choice voting — and the beneficiary was a Democrat.

Democratic candidate Jared Golden, a 36-year-old Marine corps veteran who represented parts of the Maine community of Lewiston in the state's House of Representatives, defeated incumbent Republican Rep. Bruce Poliquin after winning enough ballots through ranked-choice voting to pull ahead of him in the final tally, according to the Portland Press Herald. Ranked-choice voting is a system that allows voters to not only select their favorite candidate but also to rank other candidates in order of preference. If no single candidate wins 50 percent or more of the popular vote as voters' first choice, the ranked-choice ballots are incorporated into the existing tabulations until one candidate prevails with more than half of the total votes cast.

What makes the race in Maine's 2nd Congressional District so distinctive is that the result actually changed as a result of the ranked-choice voting system. On Thursday, Golden was initially behind Poliquin by roughly 2,000 votes. After the ranked-choice votes of two independent candidates were distributed, Golden found himself ahead of Poliquin by almost 3,000 votes. As a result, the final tally gave Golden 139,231 votes and Poliquin 136,326 votes, or a margin of 50.5 percent to 49.5 percent.

Poliquin had hoped to avert this outcome by asking U.S. District Court Judge Lance Walker to declare the ranked-choice voting system to be unconstitutional and to stop the vote count until that question had been settled. Walker refused to intervene in the tabulation process and argued that, because Maine voters have repeatedly backed ranked-choice voting, he would not overturn their verdict.

"As it stands, the citizens of Maine have rejected the policy arguments plaintiffs advance against RCV. Maine voters cast their ballots in reliance on the RCV system," Walker wrote. "For the reasons indicated above, I am not persuaded that the United States Constitution compels the Court to interfere with this most sacred expression of democratic will by enjoining the ballot-counting process and declaring Representative Poliquin the victor."

That said, Walker also decided to proceed with an initial hearing scheduled in early December to address the underlying complaint behind the filing submitted by Poliquin and three other voters from Maine's 2nd Congressional District. Because Poliquin is expected to continue to fight the results in federal court, and might even ask for a recount, Golden's victory is not yet certain.

"It is now officially clear I won the constitutional ‘one-person, one-vote’ first choice election on Election Day that has been used in Maine for more than one hundred years," Poliquin said in a statement on Thursday afternoon. "We will proceed with our constitutional concerns about the rank vote algorithm."

Michael Shepherd of the Bangor Daily News went into detail on Wednesday in an article examining the Republican congressman's arguments:

Poliquin’s constitutional claims haven’t been tested specifically yet in Maine, but certain elements have been tested elsewhere. The lawsuit from Poliquin and three of his supporters asks the ranked-choice count be stopped and the incumbent be declared the winner on the grounds that the voting method enshrined by Maine in 2016 violates the U.S. Constitution and other laws. They also want a temporary order to stop the count.

The first issue is the crux of the case; the second is what will be argued in Bangor today. Poliquin’s lawsuit claims that ranked-choice voting violates the First and 14th Amendments of the U.S. Constitution, which guarantee rights to free association and equal protection.

However, the state’s high court green-lighted the method for the June primaries. Before the primaries, the Maine Republican Party went into federal court to make similar constitutional claims to Poliquin’s about ranked-choice voting that were quickly tossed by a judge.

Poliquin’s lawsuit makes one more constitutional claim that looks unsupported, citing one line in a federal case from 1970 to claim that Dunlap has violated part of the Constitution by not seating the incumbent after his first-round plurality.

But another part of that case says pluralities are “permitted” — not necessarily required — for a winner to be declared. Louisiana has runoffs for congressional seats if no candidate reaches 50 percent of votes. That’s effectively what Maine now requires — just instantly.