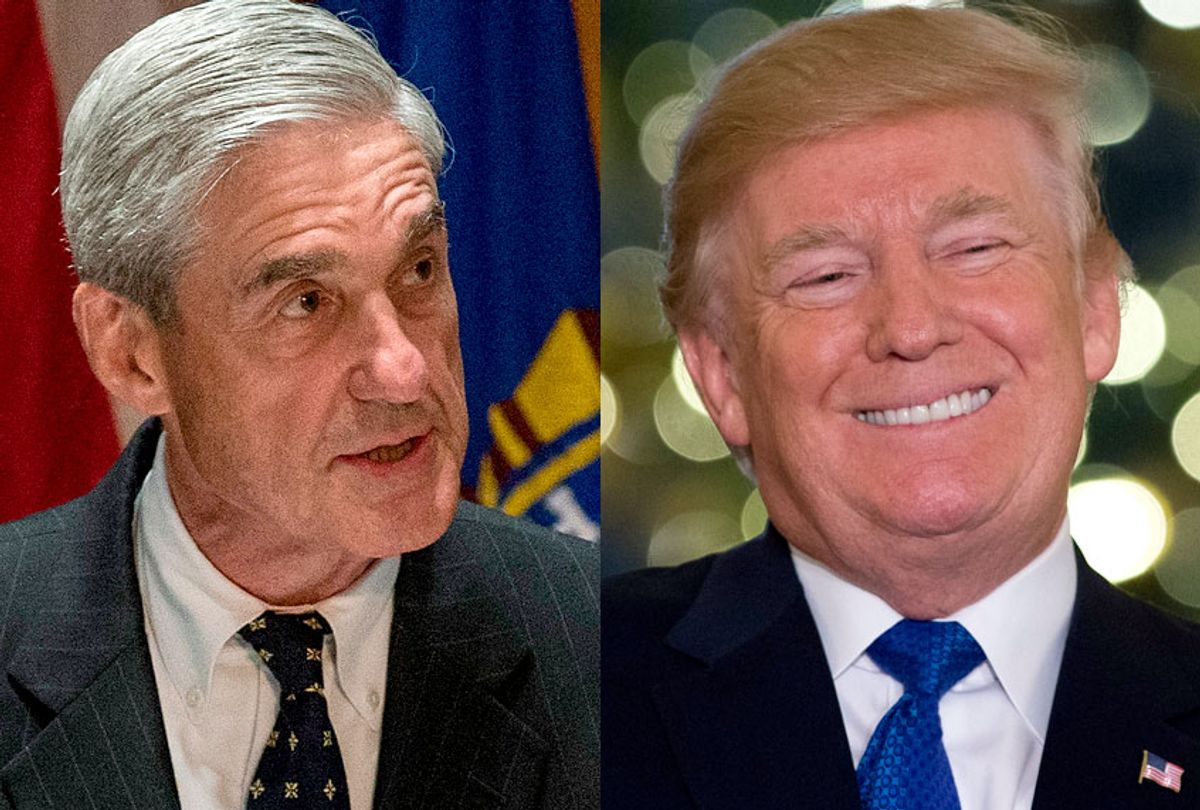 President Donald Trump claimed on Friday that he has personally answered — and completed — his written responses to questions from special counsel Robert Mueller regarding the federal investigation into allegations of collusion between his 2016 presidential campaign and Russia.

"I've answered them very easily," the president told reporters at the White House, before noting that his legal team is not writing the responses. "I'm working on them."

"You always have to be careful when you're answering questions for people who probably have bad intentions," Trump added. "I haven't submitted them yet. I just finished them."

"The questions were very routinely answered by me," Trump reiterated. He said he hasn't submitted the responses yet, noting that he has been "a little bit busy" traveling to Europe and "working on various deals."

Trump, who on Thursday blasted Mueller's probe as a "total mess" that has "gone absolutely nuts," said those tweets were "not at all" provoked by anything.

"I'm not agitated. It's a hoax. The whole thing is a hoax," he said. "I'm very happy with the White House." He later added that "there should have never been any Mueller investigation."

"I imagine it's ending, or from what I hear, it's ending," Trump continued. "I'm sure we'll be just fine. And you know why? Because there was no collusion."

Despite his promise that everything is fine, Trump on Thursday appeared to have a break down about the investigation on Twitter, writing that investigators were "a disgrace to our Nation" and claiming, without evidence, that they were "screaming and shouting at people, horribly threatening them to come up with the answers they want."

Trump's apparent meltdown came several days after he ousted Jeff Sessions from the Justice Department and named Matthew Whitaker as acting attorney general. Sessions, who resigned at the Trump's request, had been publicly scorched by the the president ever since he recused himself from special counsel Robert Mueller's ongoing investigation into allegations of collusion between Trump's 2016 presidential campaign and Russia.

The president has denied taking Whitaker’s pulse on the Mueller investigation, but he did not have to. Whitaker has previously written op-eds titled, "Mueller's investigation of Trump is going to far" for CNN and "I would indict Hillary Clinton: Opposing view" for USA Today. Whitaker, who is a former Fox News contributor, has also defended the president's decision to fire FBI Director James Comey in an op-ed titled, "Comey served faithfully, but the president made the right decision." Whitaker is a Trump loyalist — and the president has made it clear that he favors loyalty over nearly all other traits.

Trump's legal team has nearly finished writing answers to Mueller's questions, NBC News first reported on Tuesday. The news outlet reported the answers "will pertain only to matters relating to Russian interference in the 2016 election, not obstruction of justice," citing a source familiar with the matter.

In April, the New York Times reported on a series of questions Mueller wants to ask Trump. According to The Times, Mueller wants to question Trump about his 2013 trip to Moscow; his effort to build a Trump Tower in Moscow; his conversations about meeting with Russian President Vladimir Putin; and when he discovered that Russian agents had stolen thousands of emails from Democrats during the 2016 election.