Smart Watch: "My Brilliant Friend" and "Escape at Dannemora" mark the start of awards (bait) season

With the Golden Globes right around the corner, here come two series designed to lure in nominations 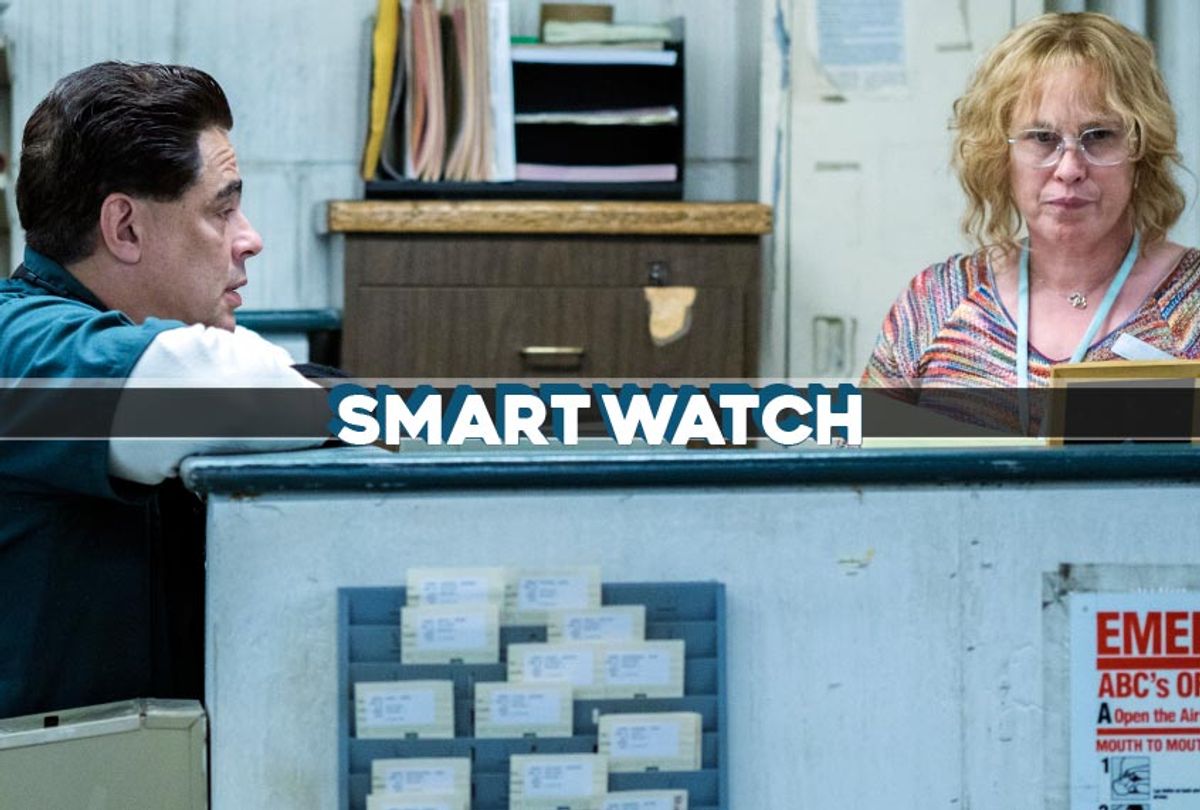 Commoners like yours truly associate this time of year with red, green, and the cheerful but tawdry gleam of tinsel. But for certain kinds of Hollywood people, visions of Golden Globes may be dancing in their heads.

Awards season. We’re in the thrust of it, making it a tremendous time for prestige film fans and artsy TV viewers and, I’m guessing, a nervous time for creatives who put their sweat and heart into projects that could gain them a little auric validation that fits perfectly on a shelf.

Somewhat ironically, though, the television work produced by cinematic A-listers has left audiences wanting. It’s not for lack of trying. Rather it’s an issue of applying the rules of cinema, a format that thrives on sweeping visuals and slow-burn performances, to television, a medium that favors efficiency and strong writing above all.

Showtime’s limited series “Escape at Dannemora,” premiering Sunday at 10 p.m., is a problematic chimera in that sense: Brett Johnson and Michael Tolkin structure the seven-part series well enough, scripting crisp dialogue and tense scenes that allow Benicio Del Toro, Patricia Arquette and Paul Dano to rip into every frame with their performances.

Ben Stiller, meanwhile, takes the opportunity afforded to him to direct this fictionalized version of a true story and creates separate films designed to lure you in to connecting with his two convicts and the prison employee seduced into aiding their escape.

As true crime stories go, Johnson and Tolkin could not have selected a better starter to spin into a script. “Escape at Dannemora” is based on an actual 2015 prison break from Clinton Correctional Facility in upstate New York, in which two convicted murderers, Richard Matt (Del Toro) and David Sweat (Dano), conspire along with inmate supervisor Joyce “Tilly” Mitchell (Arquette) to escape.

Matt, as rendered by Del Toro, is a taciturn manipulator skilled at using the people around him to achieve his own ends. Stiller makes the most of Del Toro’s burning stares and malignant scowls, using tight shots to tell as much of the characters story as lines of dialogue. You can see the cogs and wheels spinning in his silent looks, speechless spaces Dano meets with a quietly agitated energy in the scenes they share.

Arquette’s transformation into Tilly, meanwhile, is shocking, both physically and with regard to her personality. Out of all the performances, Arquette’s wins the prize for contortionist acrobatics, in that she takes a woman who is outwardly awful and selfish, and somehow allows the viewer to empathize with her deflated desperation and a corrosive, inwardly-directed rage.

In Tilly, we see a woman whose inability to be satisfied leads her to make stupid choices like engaging in an affair first with Sweat, then with Matt, and making little effort to mask either. All she can think to do is harangue and gaslight her dullard of a husband Lyle (Eric Lange), with whom she subsists in a life devoid of excitement. If Tilly is unbearable, that’s because she mirrors her unyieldingly drab surroundings.

She also craves illicit attention and the rush of rule-breaking, making her a natural inside collaborator with Sweat and Matt’s plan along with fellow corrections officer Gene Palmer (David Morse). By the time the escape is in progress, the audience becomes a willing booster to this women and the men she’s helping, even though we know it doesn’t end well. Or maybe it’s because we do know how it ends.

A title like “Escape at Dannemora” promises a narrative that builds towards a peak. But the ponderous construction involved in getting there places a drag on its energy, to the point that the production asks not for the audience’s patience as much as perseverance.

Stiller and the writers mold every chapter into development exercises meant to establish each character’s motivation and psyche, while also evoking the personality of the town just outside its walls. By the time the escape is on we understand the kind of town Dannemora is; we get that its clammy inhabitants, especially Tilly and Lyle, endure lives as boxed-in as the men inside Clinton’s walls.

A decade ago, perhaps, Stiller might have gotten a bit of rope for adopting this slower, methodical approach because it was still novel. These days we can’t call it anything other than sluggish. And this is a quandary one has to weigh in committing to “Escape at Dannemora.” The performances are excellent, and I’d be very surprised if any of the leads are denied a nomination.

Stiller may get a nod as well; certainly the episode featuring the escape merits consideration if only for its inspired use of a pulse-quickening tracking shot in a tight, difficult space. Admirably, after all the emotional table-setting Johnson and Tolkin script an entire episode devoted to showing the sort of people Matt, Sweat and Tilly were before their lives collided in Dannemora as a sobering reminder that our protagonists are anything but heroes.

Whether these substantial positives outweigh a cinematically indulgent pace depends on a viewer’s taste. But my guess is the talent caliber will be enough to buy the attention, if not the votes, of Hollywood Foreign Press Association voters.

Adopting a cinematic feel in a television series isn’t always unwise. Sometimes, in fact, it’s the only move that makes sense. In mulling over the challenge of bringing the first of Elena Ferrante’s Neapolitan Novels to television, it is difficult to imagine filmmaker Saverio Costanzo successfully adapting the story to a serialized format in any other manner.

“My Brilliant Friend,” debuting Sunday at 9 p.m. on HBO, plumbs the internal, secretive conflict that is often a component in intense female friendships, a concept the story’s narrator Elena Greco (played at the age of 60 by Elisabetta De Palo) storms through upon hearing her lifelong friend Lila Cerrullo has vanished. From there the timeline recedes to 1950 and Naples, where the two first became friends.

Their bond, though lasting, is not an easy one. Testing it at every turn is the naked cruelty and violence that surrounds them, a force born out of poverty and the corruption of organized crime in their closed section of town where everyone lives on top of everyone else.

Lila is gifted but a child of parents who can’t afford to pay for her education, one of the few avenues for a working-class girl to escape her limited circumstances. Lenù, meanwhile, has her schooling paid for. Even as their paths diverge and Lila is forced to work instead of expand her education her intellect and boldness are not dimmed. Lenù, despite her advantages, sentences herself to emotional retreat.

On the page Ferrante (the pseudonym for an author whose identity remains a mystery even now) conveys the capricious nature of the girls' existence through the viewpoint of Elena, known by her nickname Lenù, in a manner that comes across as nostalgic and somewhat detached all at once, granting the story an intimacy the likes of which the HBO adaptation does not replicate.

But it may be wiser to view Costanzo’s vision as something utterly separate from the book, if it’s possible to decouple product from source. In doing so one might appreciate Costanzo’s measured evocation of classic Italian filmmaking as rendered by the likes of Vittorio di Sica, director of “The Bicycle Thief,” an aesthetic that embraces sentiment without losing sight of the ugly truth of poverty.

And “My Brilliant Friend” is a story about survival in silence and the cruelties visited upon the poor, especially girls growing up in poverty in a post-World War II Italy. This is not a loud series, although physical violence explodes at every turn with no promise of recompense to the afflicted. Lenù and Lila mature as witnesses to and targets of such violence; Lila, ever brilliant and defiant, faces it, as if hoping surviving it will somehow harden her.

In turn, this only adds to the marvel Lenù holds for a friend who sometimes pushes her to do bad things, for reasons that aren’t clear. “She lit up like a warrior saint” the adult Lenù remarks of her companion as she watches Lila get into a rock-throwing fight with a group of boys, refusing to run away even though she is outnumbered. Later the older brother of one will exert more demeaning violence upon her, tossing her around like a rag tag. She refuses to cower then, or when her body fractures under the wrath of an angry father.

Of that episode, all Ferrante writes is, “Fathers could do that and other things to impudent girls.” On the page that observation is devastating. So is seeing it happen, and the expressive veil of bravery and shock the actress playing Lila conveys with uncanny simplicity.

For all of its inspired touches, the wisest among them are the casting of newcomers Elisa Del Genio and Ludovica Nasti as the younger versions of main characters Elena and Lila, and Margherita Mazzucco and Gaia Girace as their adolescent versions. Nasti and Girace have the meatier challenge in playing a girl who armor hides a wealth of intellectual machinations we never quite grasp, given that our view into this world is via the relatively privileged Lenù; in each era, the actors create a transfixing yin and yang that keeps the viewer’s rapt focus.

Even so, “My Brilliant Friend” may be cooler to the touch than the book’s passionate admirers might be expecting. There’s no getting around the deficit of core-shaking feeling Lenù’s narration adds to the page. In its place is a consciously woven artwork whose cinematic flourishes wielded with purpose, not to impress or coax forth validation from any awards-giving body. But if happens to receive a nod within the coming months, few may question why.