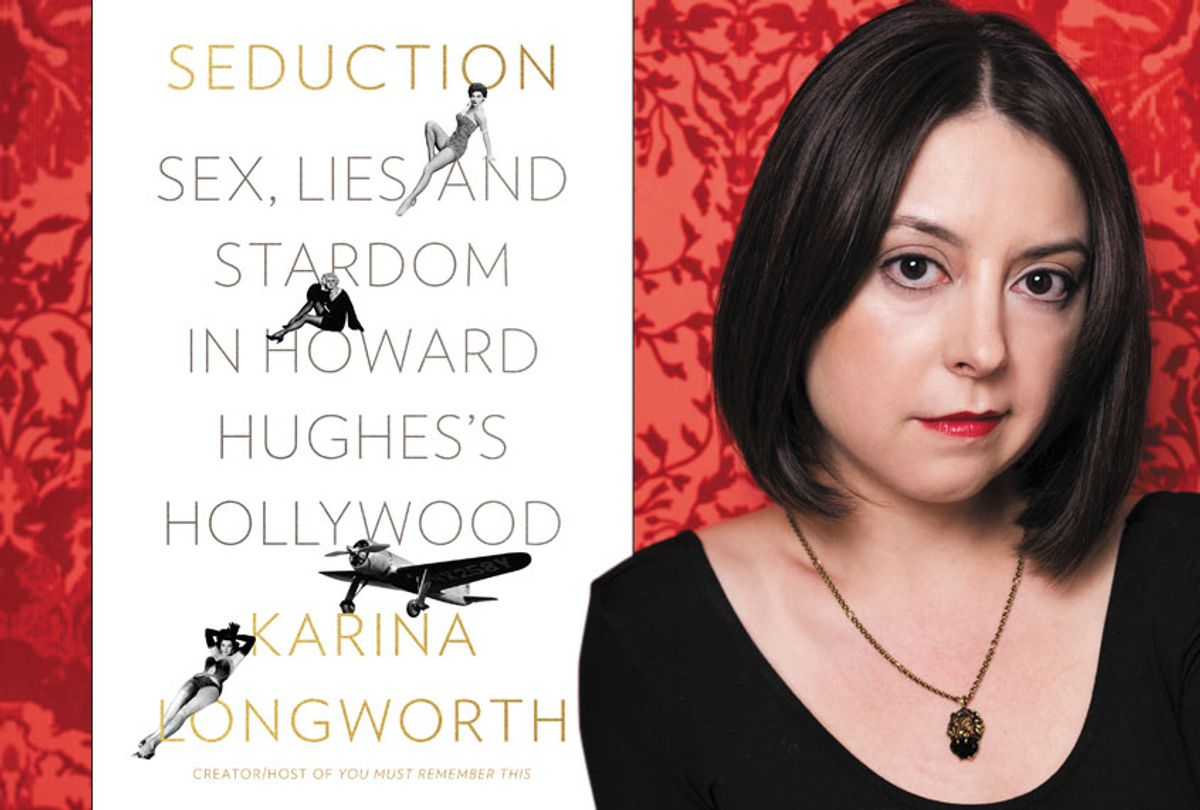 If you want to trace the evolution of Hollywood over the course of its most formative decades, look at the life of one man. Spoiler: It's really a story about women.

In "Seduction: Sex, Lies, and Stardom in Howard Hughes's Hollywood," author Karina Longworth views the dream factory through the life of Howard Hughes, the mogul whose on screen productions and offscreen relationships with some of the industry's most iconic female figures — including Jean Harlow, Katharine Hepburn, Ava Gardner, and Lana Turner — molded the industry.

Longworth, host of the addictive podcast "You Must Remember This," says the book was a natural outgrowth of the show. For the book, she focused on expanding her work on three episodes she called "The Many Loves of Howard Hughes," about women with really disparate Hollywood experiences who had all been involved with Howard Hughes, either professionally, personally, or both. She knew there had to be even more women whose stories could be told.

"That would be a way of hanging a portrait of what it was like to be a woman in Hollywood during this period that historians call the classical Hollywood era, which was just coincidentally exactly the length of time that Howard Hughes was active in Hollywood," she says. "He arrives at the end of the silent era as the studios are consolidating their power. He starts to disappear at the late 1950s, as the studios had lost power to television and to cultural changes. It was an interesting lens on so many other things."

As Longworth's book makes clear, the man whose name is on the cover is the backbone, not the main attraction. "I never thought of it as a Howard Hughes biography," she says. "It was never really to me his story. His story is just the skeleton that would give form to the stories of the women. It was always supposed to be about seeing this world of Hollywood through these women’s eyes. On a really simple level, I wanted to say who these women were before Howard Hughes came into their lives, how he changed their lives and careers and just show a little bit of what happened after."

Brimming with what Longworth's listeners will recognize as "secret and/or forgotten" tales of Hollywood's early years, "Seduction" is a luxuriously deep dive, one that meticulously acknowledges the fuzzy edges between lore and verifiable fact. Throughout, the author pauses to note when accounts of events vary, or players in the story likely self-mythologized.

"I don’t know that people want to hear this," Longworth says, "because they want to think that people like me are uncovering the buried truth that nobody has ever known before. But in a lot of these cases, there is no truth left that’s buried because everybody’s dead. All we have are these narratives that were recorded either at the time things were happening or in some cases, through memoirs that were released years later."

"Either way, everything is filtered in its narrow perspective — if it’s not just straight up publicity, which is usually mostly lies," she adds. "It’s very, very difficult to know what is absolutely the truth, but I have a lot of experience reading through this stuff on the podcast. I just tried to be very transparent when I don’t know what the truth is."

As Longworth explains it, what she tries to do is not definitively declare what the truth of an event was, but to figure out why certain stories were told, and told in the ways that they were — whether it's a narrative put out by a publicist or studio, or a columnist's interpretation, or an artist in her autobiography.

Coming a year into the #MeToo movement, as the industry is still reckoning with its legacy of abuses of power, "Seduction" feels like an especially modern tome. It's a story of abuses of power, but also of women who managed to persist and even succeed within the constraints of a system stacked against them.

"There’s nothing in the book that’s directly influenced by the #Me Too movement," says Longworth. "The book is what it was always going to be, because I’ve been living with this material for years."

"There are a lot of factors, including this control that studios had over their contract players and the way the publicity system worked. And the casting couch, it is a real thing," says Longworth. "I talk about different ways in which it worked that are maybe not the ways that people have in their heads, like Howard Hughes’ network of spies going around the country procuring women for him. I hope that people will find it sad as I do in the book. There are no stories of out-and-out rape or anything like that in the book; it’s more this systematic treating of women like they’re disposable and like they’re not human. That’s the stuff that is really heartbreaking to me."

Yet "Seduction" also introduces the reader to fascinating women who did wield creative power, including female filmmakers like Ida Lupino, whose legacy is part of Hollywood history.

"One thing that became really clear comparing and contrasting a lot of women’s stories is the extent to which women who wanted to work as writers or directors often had to align themselves with a powerful man and usually that was a man who was her husband," says Longworth.

Longworth also acknowledges that as we examine the lives and behaviors of historical figures, we have to decide for ourselves how to approach their work. As she does on her podcast, she discusses hushed up scandals, racially insensitive casting choices and blatant sexism, all while also looking at the artistic merits of the output itself.

"We have over a hundred years of film history that we haven’t looked at from this perspective," she says. "I don’t think that there’s anything productive that could come out of avoiding it. Howard Hughes is long gone. He’s not going to make any money if we watch 'The Outlaw.' I just think that this is history and what we need to understand in history. I hope that it is actually easier to be able to have these nuanced conversations about the past than it is about the present."

"I understand why somebody would never want to watch a Miramax movie," she adds, "but hopefully in the future we’ll be able to have more perspective to be able to unpack the thorny things that are happening right now."