Why so many tech workers worship their CEOs 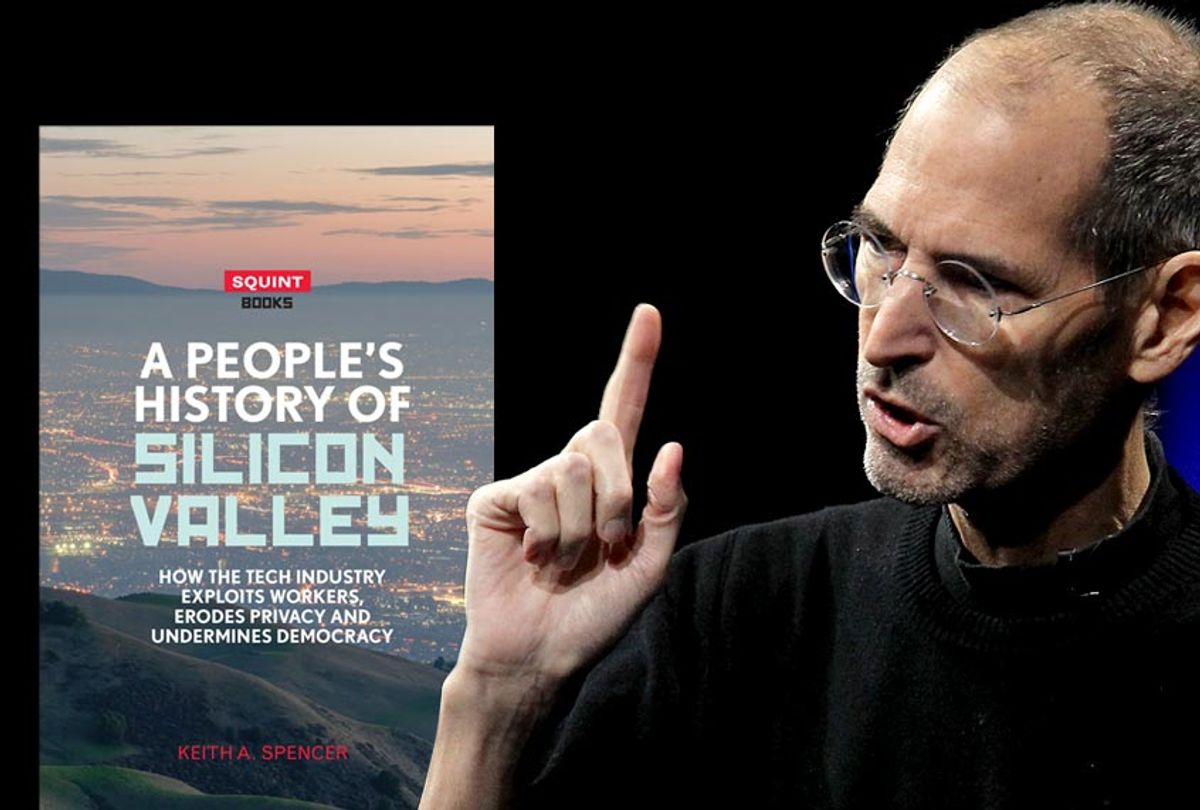 Excerpted from “A People’s History of Silicon Valley: How the Tech Industry Exploits Workers, Erodes Privacy and Undermines Democracy,” by Keith A. Spencer, on sale now from major booksellers. © 2018 Eyewear Publishing. Reprinted with permission.

In what has proven prophetic for the politics of Silicon Valley, the demise of labor in the United States happened to coincide with the rise of the tech industry. Nationally, the United States experienced a growth in union membership in the early 20th century, peaking in the mid 1950s. Yet during the 1960s and 1970s, as manufacturing industries in the United States fled overseas, labor unionization rates began to dwindle. When Reagan’s anti-labor administration came to power, unions were suddenly no longer in vogue. It was precisely during this time that Silicon Valley’s star began to rise.

In terms of the white-collar employees of Silicon Valley, the lack of labor unions is perhaps to be expected to some extent. Because their wages are comparatively higher, white collar professionals are historically less likely to see themselves as part of an oppressed class of laborers whose work makes money for wealthy CEOs and investors – even if this is technically true. John and Barbara Ehrenreich, social critics and essayists who have written extensively about the state of labor in the United States, coined the term "professional-managerial class" to describe the class of employees who, though performing the same kind of wage-labor, feel a kinship with the rich owners, bosses and managers rather with than the blue-collar class more likely to be performing manual labor. "Historically, the [Professional-Managerial Class] have designed and managed capital’s systems of social control, oftentimes treating working-class people with a mixture of paternalism and hostility," they write. This may account partly for Silicon Valley’s class-blindness.

Still, just because many white collar techies feel more kinship with the boss doesn't mean that they should, or that it's in their interest. There are many historical examples of professional-managerial class workers at tech companies who were left behind during boom times, while those at the top got rich. One of Apple’s earliest employees, Daniel Kottke, was Steve Jobs’ "soul mate" in college, and shared a house with him in the early Apple days. Kottke had worked for Apple when it was still based in a garage. Yet because he was an hourly employee, he was never granted stock options. Prior to Apple’s initial public offering (IPO), Kottke pled with Jobs on this topic – Jobs could have very easily granted him "founder’s stock" – but Jobs refused to do anything for his friend. A fellow engineer, Rod Holt, saw the writing on the wall for Kottke and went to Jobs’ office to press him on the issue. As Jobs biographer Walter Isaacson documents:

"We have to do something for your buddy Daniel," [Holt] said, and he suggested they each give him some of their own options. "Whatever you give him, I will match it," said Holt. Replied Jobs, "Okay. I will give him zero."

Kottke’s labor was vital to building the company’s fortune, though he was one of many left behind. If he had any inclinations that his interests and his former best friend (now boss)’s interests were aligned, his experience with Jobs likely dissuaded him of this notion.

Even in the early days of Silicon Valley, this tendency of programmers to identify with founders was commonplace. Though generally well-paid professional workers, programmers are still commonly exploited by tech companies who prey on their goodwill and strong sense of company loyalty. The early days of Apple offer some choice tales to this end. Doug Menuez, a photojournalist who was given free reign to wander and "record the daily lives" of workers around Silicon Valley, documented the harrowing exploitation of programmers at many major tech companies in the 1990s. In particular, Menuez recorded how common it was for employees to bring their children to work, knowing that if they didn’t, "they might not see [their families] during the daytime hours." The work environment at Apple was quite harsh: "the pervasive expectation from the [tech] companies (and from colleagues) was that everyone would work until he or she dropped," Menuez noted. One Apple manager challenged employees to stay up all night working and then go on a run with him at 6 a.m. In 1992, when Apple management demanded that 30 programmers rewrite one million lines of code within a year, the programming team began to work "around the clock" to achieve their goal, including a product manager at the time named Michael Tchao. "Some nights [Tchao] would get home to his Palo Alto cottage around midnight after 16 hours of nonstop meetings, and he would cry," wrote a New York Times reporter in a profile. As a manager, Tchao was able to "pull back" from the project a bit after reaching a breaking point; his team was not so lucky. In December 1992, one of Tchao’s programmers had a mental breakdown and attacked his roommate, getting sent to jail on assault charges. And a 30-year-old programmer on the same team, Ko Isono, had a similar breakdown. "Like everyone on the team [Isono] was working incredibly long hours, and his wife was soon miserable, stuck all day and all night in a drab house in a strange land," wrote the Times. On December 12, 1992, Isono went home after work and committed suicide by shooting himself in the chest.

Jan English-Lueck, an anthropologist who interviewed engineers and programmers at Apple, noted how loyal employees viewed the company in "missionary hues," and saw their employer as religious in its power. "Being in Silicon Valley, it’s part of a culture of people who put their heart and soul into their jobs," said Beth, a tech worker who was interviewed by English-Lueck. Beth continued:

"[Silicon Valley] seems to be more socially conscious... [y]ou think about how the place you work affects the community or affects the world... When I first [worked at] Apple, we felt we were changing the world. At Apple you definitely have the feeling that you impact people’s lives."

Beth’s words reveal a reverent sentiment towards her employer. One can see how a shrewd employer might exploit this belief in their company’s "social consciousness" to encourage them to work round the clock, or choose to work longer hours rather than see their families. Eighty, ninety, even a hundred hours a week is not an unusual workload, both at established companies and high-pressure startups.

The tendency of programmers and engineers to identify so deeply with their company helps tech corporations control their employees and prevent professional unionization, which would cut into corporate profits by giving a greater share to workers. "A lot of tech workers see themselves as future entrepreneurs, but really they’re not if you look at their relationship to production," said ex-Google subcontractor Danielle. "I think that’s intentional. I think there’s a lot of ideology that gets spread throughout the industry... there’s the whole mythos around these giant companies," she added. To paraphrase a well-known quote by Ronald Wright, programmers would rather see themselves as millionaire founders experiencing a temporary setback, than as exploited workers generating hefty profits for an ungrateful owner. In other words, despite the astounding improbability of success, many believe they can fulfill the myth of the self-made entrepreneur.

Back in 1983, an Associated Press article titled "Labor Unions Are Absent in Silicon Valley" painted a bleak picture of labor in the tech goldmines that is equally true today. "Silicon Valley, breeding ground for the largest un-organized industry in the country, works as hard to make unions irrelevant as it does to make last year’s computer products obsolete," the articled stated. The AP report described a "formidable non-union track record" in Silicon Valley, including the failure of Atari’s unionization election in 1983 and a string of unsuccessful unionization votes throughout the 1970s. Silicon Valley, the report said, benefits from a perception of itself as "fast-moving" and "dynamic," whereas unions are perceived there as "a drag on progress, a relic of the old, industrialized East and Midwest." The writers quote a labor lawyer who comments that "the Valley is union free is because its companies are very sophisticated in preventative labor relations." The "competitive pay and benefits package" of companies like Hewlett-Packard are mentioned as another preventative: as a result of this paternalism, employees feel that their needs are already respected and hence that they have no need for a union, even though their salaries, working conditions, and benefits could be enhanced by unionization.

Behind the scenes, tech companies don’t really strive to create paternalistic utopias for their workers. To the contrary – they are aware of the remarkable profits their employees generate, and they use sly psychological means both to increase their work output and ensure workers identify with their employer rather than see them as exploiters. "When you look at the rate of exploitation of tech worker – it is some of the highest for any profession, in terms of the amount of profit the company makes off of each worker," Danielle told me. For the 2013 fiscal year, Apple generated a profit of $460,000 per employee – a figure that includes both professional workers (with salaries in the $100,000-average range) and its Apple store employees, who make service-sector wages. For Google, the figure was $270,000 in profit per employee, and for Facebook $236,000.

While wages for programmers are comparatively high, given the amount of profit they generate for tech companies, their wages still do not reflect the competitive value of their skills. In part, that is because in 2010, the US Justice Department discovered that, back in 2005, tech CEOs – including Steve Jobs of Apple and Eric Schmidt of Google – illegally colluded to keep engineers’ wages artificially low. They achieved this remarkable feat by sharing wage data and agreeing to avoid recruiting from each other’s companies. Later, Adobe, Pixar, and Intel were found to have been involved as well. The amount of money kept from workers as a result of this collusion is estimated at $9 billion dollars. (A separate investigation discovered other companies, including eBay and Intuit, had similar collusion pacts.) This money illegally kept from programmers instead trickled up to the very richest in Silicon Valley, and hence exacerbated the regional income inequality over this period by sending even more dollars to the very richest among us.

In 2015, a class-action lawsuit against these companies’ collusion was settled for $415 million, a fraction of the actual money lost by workers. Yet as much as Silicon Valley fights back against unionization, or argues that they are unnecessary for their workers, cases like these show how much tech workers would benefit from them.

Excerpted with permission from “A People’s History of Silicon Valley: How the Tech Industry Exploits Workers, Erodes Privacy and Undermines Democracy,” by Keith A. Spencer, available now from major booksellers. © 2018 Eyewear Publishing.