Give the joy of a dead woman's sweater: The case for buying secondhand holiday gifts

Forget fast fashion this year and buy your gifts secondhand 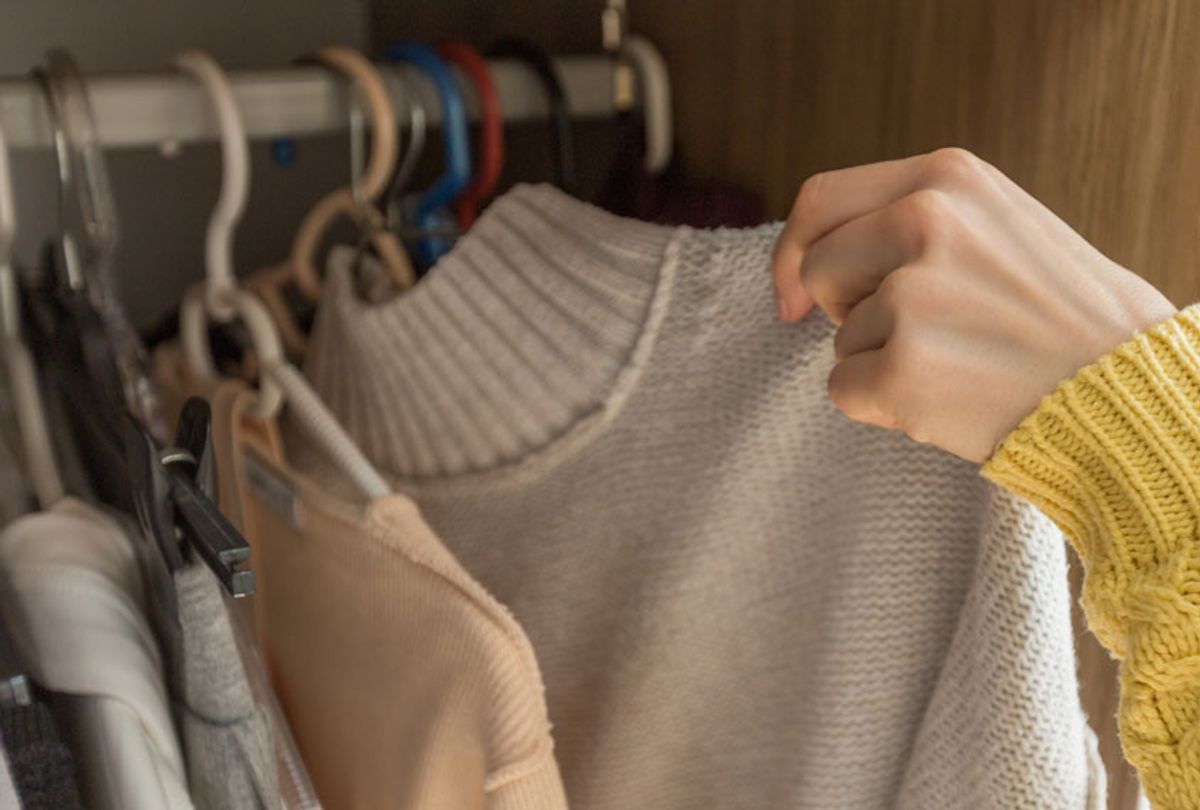 This year for the holidays, families across the land will gather together for an annual tradition — exchanging sweaters and T-shirts they stampeded to buy a few weeks earlier at those big Black Friday sales and that they'll probably forget about or toss by Valentine's Day. A 2016 survey from thrift retailer Savers estimated that Americans throw away roughly 81 pounds of clothing a year — most of which could be donated or recycled. That's a jaw dropping 85 percent of our wardrobes. This is why I'm asking you this year to consider a radical new approach. Try wearing more dead people's clothing.

The notion hit me a few days ago, as I was rushing out the door, simultaneously buttoning my coat and slinging my handbag over my shoulder. On this particular day, I was wearing a cashmere sweater and high end jeans from Goodwill, an Italian leather handbag, and my most recent trophy — a pair of designer boots I've had my eye on since they were in season . . . seven years ago. Topping it all off, the wool peacoat a friend gave me right before she died last year. In my closet hangs one of her silk blouses. My daughter has a pair of her suede wedges.

I'd estimate at least three quarters of my wardrobe is secondhand. If it's not underwear, socks or pajamas, I rarely see the need to buy clothes off the retail rack. A huge part of my philosophy, I admit, comes down to a contempt for the wastefulness of clothing consumerism. Americans typically buy more than five garments every month, and we hang onto our clothing half as long as we did just fifteen years ago. The result is an appalling amount of straight up trash. That's not just a consumer issue. Last summer, Burberry sparked shock — and a change in their policy — when it was revealed they had burned almost $37 million of unsold clothes, reportedly to prevent dilution of the brand's prestige. The UN estimates the fashion industry is the planet's "second-biggest consumer of water, producing 20 percent of wastewater while also generating more greenhouse gas emissions than all international flights and maritime shipping combined."

Some retailers are trying to change the cycle of waste — H&M encourages patrons to drop off unwanted clothing from any brand to be re-worn, repurposed or recycled. The company says it has so far received nearly 18 tons of clothing from its initiative. Other brands, like Nike, ASOS and Gap, are aiming to implement new and more sustainable policies by 2020.

Yet while major businesses are inching toward doing more of their part to step up, it makes common sense for us to as well. It's not an unusual idea. While Meghan, Duchess of Sussex gets headlines for "recycling" a dress now and then (i.e. wearing it more than once) the Balance estimates more than 70 percent of the world's population uses secondhand clothing. Join us, won't you?

I've been scouring Salvation Army shops and thrift stores my whole life, and eBay for the past twenty years. I did not grow up with much, so the idea of secondhand clothing — or can openers — was never a big deal. But in adulthood, I've come to appreciate more deeply the entire experience of creating a wardrobe with a little history. (And not long ago when I had a very atypical week of fancy events, I didn't hesitate to call on Rent the Runway for a short term designer wardrobe. You think I usually swan around in Celine?)

My second-time-around closet isn't just a product of a tight budget and environmental concerns, though. I'm also a huge pain in the butt about what I wear, and I don't like most of what's out there. If you spent any time in some online conversions about fashion or read up on retail trends, you'll see I'm not alone in suspecting a serious drop-off in quality from some of the bigger, traditionally reliable brands. In the wake of declining sales over the past few years, for example, J. Crew sought to lower its prices, resulting in customer complaints that the merchandise was no longer up to par. Meanwhile, "Factory" and "Outlet" versions of familiar brands have been proliferating both online and in shopping centers, where intentionally lower-end merchandise bears the trusted name recognition of their somewhat higher value cousins. Clothes fall apart more quickly, and get replaced more quickly, and the cycle continues. (Pro tip here: Before you toss something, try a tailor! They fix clothes!)

Impulse shopping is not an option in my life. Buying secondhand tends to take more thought and planning, but what's wrong with that? I use sites like eBay for absolute sure things — my favorite jeans in my favorite cut but in a different wash, a pair of shoes from a brand I already know my sizing for, or a sweater or jacket where there's a little wiggle room for individual fit. The secondhand stores are for broader missions where I'll need to try items on — a pair of wool trousers or a well-tailored blouse. I look for good brands and good materials, and then I clean them, have them hemmed if necessary, and take good care of them (except for the occasional dripping of pizza grease). Buying secondhand isn't about getting things more cheaply, although there is often an economic advantage. It's about getting things that are better. It's not rocket science.

I get that some people have a harder time with the idea of secondhand — my own younger teen daughter has OCD, and her germ and cleanliness issues make her extremely uncomfortable with anything that's been used, no matter how well it's been washed. My older teen, in contrast, currently has a penchant for vintage t-shirts with corny dad jokes. So while I'm content to clad myself in estate sale duds, I'm sensitive to what I pass on to others.

That said, however, I am still a believer in the power of giving holiday gifts that don't necessarily come from a pile of acrylic knits near a cash register. This year one member of my family is getting a pair of hard to find leggings I found on eBay, and another is getting a piece of vintage Fiestaware. In the past, I've gifted people the French lobby card of a favorite movie, a signed edition of a special book, a new-in-box discontinued makeup shade and a Barbie accessory a friend had longed for and never received as a kid. They were all received with happy surprise, and that feels more satisfying all around than buying some useless doohickey because there's some magical quota of stuff you're supposed to shove under the tree. So think about the people on your gift list. Think about their favorite memories, their happy places. I'll bet you can find something that speaks to that without losing your mind at a big box store this season.

I'm not opposed to new things. After an irrational amount of research, I sprang for a new down coat this season. I've requested a new cardigan for Christmas. I don't believe either of them will be in a landfill by next December.

I don't live like this because I'm some tacky dumpster diver. I may be nobody's sartorial role model, but my wardrobe is well curated, high quality and exactly what I want. My tiny clothes rack is not overstuffed, and I have a closet that reflects both my ethics and my taste. When I'm finished with an item, there's a weekly recycling drop-off I can take it to. And sometimes, when I do, I like to imagine that the sweater that once belonged to another woman and kept me warm for a while is waiting in that pile for the next person to come along and see it. Not as trash, but as the continuation of a well-made story.