Black lives don't matter to Major League Baseball — what else is new? 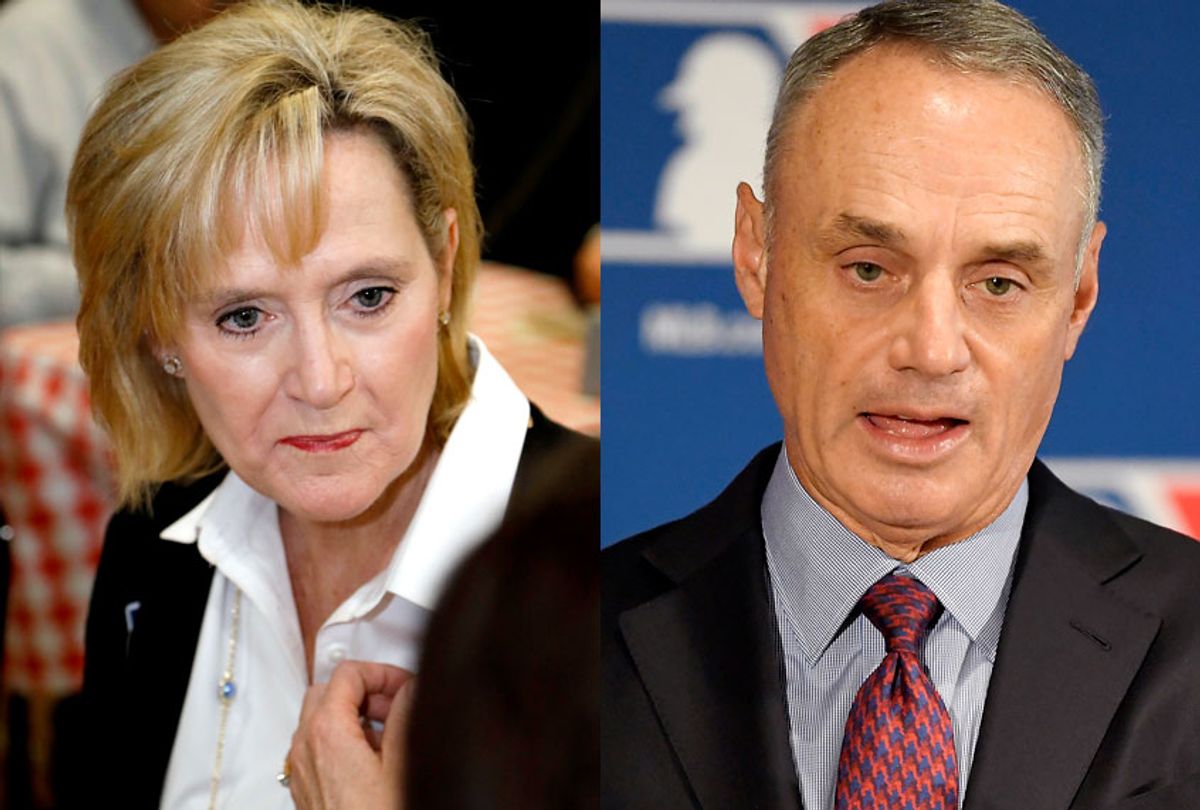 Republican Senator Cindy Hyde-Smith of Mississippi has seen her name in more headlines over the past week than she probably could have imagined. Her name isn’t popping up just because she's in a run-off election against her opponent Mike Epsy today, and Epsy is trying to be the first African American to represent the state in the Senate since Reconstruction. And it’s not for any positive action or major accomplishment she’s made, either. Hyde-Smith is relevant beyond Mississippi because she joked around about lynching — in Mississippi, a state with brutal history of stringing African Americans from trees before dissecting their bodies and auctioning off severed fingers and genitals as trophies — a few weeks ago during a campaign stop.

Hard as it is to believe now that the video has been seen everywhere, but her comments didn’t seem to bother her corporate sponsors until the video went viral on social media.

"If he invited me to a public hanging," Hyde-Smith said on Nov. 2 while wrapping her arm around a cattle rancher, "I'd be on the front row."

In response, seven companies asked for their campaign contributions to be returned, according CNBC, including Boston Scientific, Leidos, AT&T and Walmart, which tweeted that her remarks “clearly do not reflect the values of our company and associates.”

But a Nov. 23 FEC filing named Major League Baseball as a corporate donor, too, as first reported by journalist Judd Legum. Now the MLB says it wants its $5,000 donation back as well. The sports plot thickened when it was revealed that the MLB donated to Hyde-Smith's campaign weeks after she made the inflammatory comment, which the league claims it was not aware of at the time.

All told, the Office of the Commissioner of Major League Baseball PAC donated $245,500 to scores of 2018 campaigns for Senate and House candidates on both sides of the party aisle.

“The contribution was made in connection with an event that MLB lobbyists were asked to attend,” MLB spokesperson Pat Courtney said in a statement. “MLB has requested that the contribution be returned.”

According to YAHOO sports, the MLB made the donation to Hyde-Smith because one of their lobbyists couldn’t appear at a fundraiser put on by Senate Majority Leader Mitch McConnell of Kentucky earlier this month. (Of all the people in the world you could be around, why would you hang with with McConnell? I guess they have a shared interest.)

Asking for the money back is a cute PR move on behalf of the MLB; however, it’s not going to make them look any more progressive. (It's not just an issue at the Commissioner's level, either — San Francisco Giants owner Charles B. Johnson has demanded the $5,400 he and his wife Anne donated to Hyde-Smith back, too.) It’s easy for fans like me to believe that the MLB is not sorry about supporting Hyde-Smith, even after it learned about her comments, but rather sorry that fans heard them and were outraged to learn that the MLB supports such racist language from public officials. Once exposed as a donor, the league tried to appease its fans in the cheapest manner possible.

But in reality, it's not surprising. MBL supporting a person like Hyde-Smith is part of a long history of the league's racist antics. I’m not talking about Jackie Robinson days, either. I’m talking about it being 2018 and Dave Roberts of the Dodgers is the only African American manager in the major leagues. Add him to the couple of minorities holding minor shares of a few teams and there is the league's diversity in a nutshell. The MLB supports politicians like Hyde-Smith, who have also made prior jokes about voter suppression for very strategic reasons, for one main reason — a person like her represents the heart of their fan base now.

The kind of fans that make fun of Asian players like Yu Darvish by pulling on their eyes so that they appear to be slanted during a World Series game back in 2017.

The kind of fans that prompt anti-racist activists to hold up a sign in Fenway Park that reads, “Racism is as American as Baseball," in an effort to resist.

Adam Jones, the Baltimore Orioles All-Star who was called the n-word by Boston fans back in 2017, said it best when he was interviewed by  USA TODAY Sports: “Baseball is a white man’s sport.’’

“We already have two strikes against us already,’’ the center fielder said. “So you might as well not kick yourself out of the game. In football, you can’t kick them out. You need those players. In baseball, they don’t need us.”

In 2016, my colleague Andrew O'Hehir took a deep dive into the big — and white — business of baseball, which is struggling to maintain cultural relevance. As O'Hehir writes, Major League Baseball "has pretty much become the Republican Party of professional sports" as it "has been reinvented, whether deliberately or accidentally, as an immensely successful niche sport whose audience is overwhelmingly white, suburban, affluent and middle-aged or older."

If the numbers tell us that baseball isn’t dead or dying, they cannot quite explain how and why it has so thoroughly driven away younger fans, working-class fans and nonwhite fans over the last three decades. Baseball is now largely a sport played by exurban white Americans and young men from the Dominican Republic and other Caribbean nations, with a smattering of imported Asian players. African-American participation in baseball is at or near an all-time low, a change that is glaringly obvious to those of us who grew up when most of the game’s best hitters were black Americans, from Willie Mays to Willie Stargell to Reggie Jackson to the steroid-tainted home run king, Barry Bonds. The 1979 Pittsburgh Pirates, who beat the Orioles in that World Series game where I snuck through the fence, featured eight black or Latino players among their starting nine.

The reasons why are complex and open to endless debate. Sound familiar?

As I have suggested, the real meaning of the question “What happened to baseball?” is probably “What happened to America?” In an era of increasing political division and economic inequality, the naïve and sentimental democratic dream that baseball once appeared to represent has become unworkable and even embarrassing. If my friend Chris and I were 11 years old today, we might watch Giants games on our dads’ big-screen TVs once in a while. (Most likely while wearing our Stephen Curry or Lionel Messi replica jerseys.) But would we feel anything more than bafflement, impatience and contempt for the fatuous middle-aged notion that baseball somehow expressed the American soul — or that America had a soul?

That’s as simple as it can get. Black people don’t really matter to the MLB on or off the field, and it’s heavily reflected in their actions. And now, their alliance with Hyde-Smith has made it even easier for me to tune out.