Live the joy, pain, romance and riffs with Midge Maisel — then Slay with RuPaul and Nail It! with Nicole & Jacques 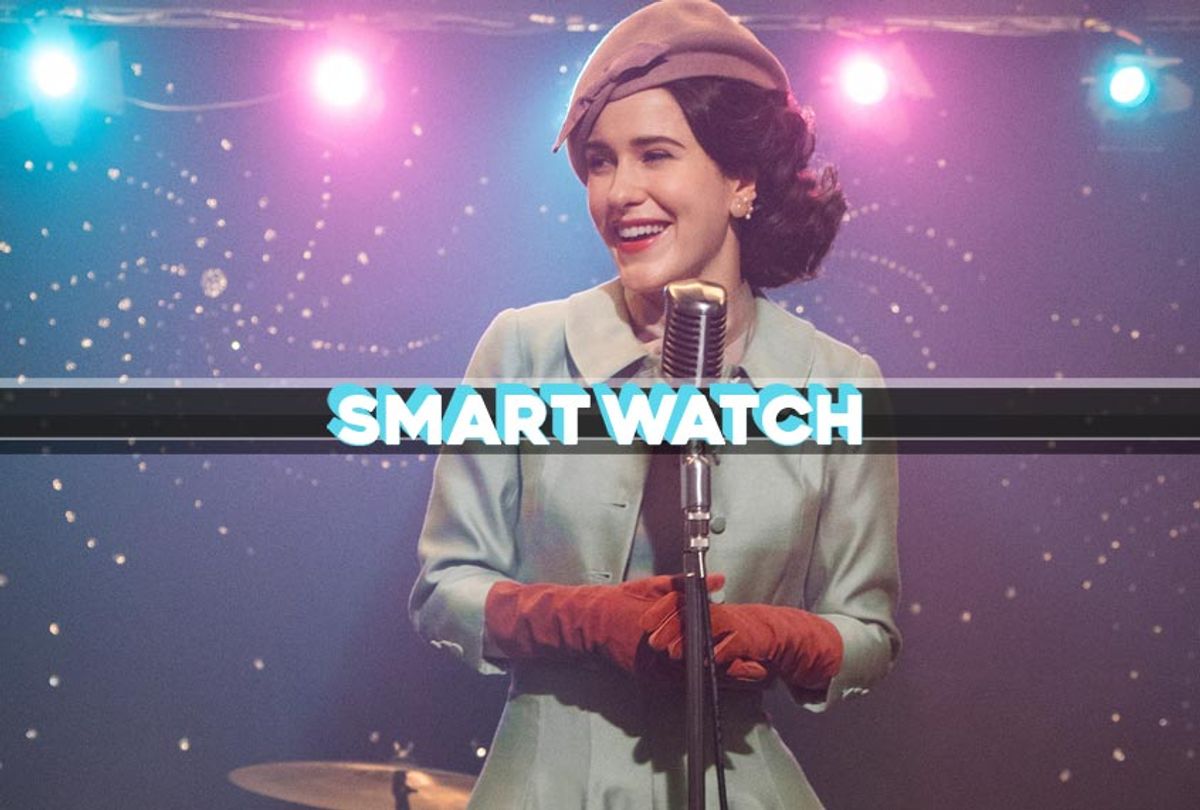 Sparkling. Romantic. Awe-inspiring. Nostalgic. And occasionally, exhausting and a little saddening. That’s the holidays for you. That’s also “The Marvelous Mrs. Maisel,” returning for its second season in fine form and not a moment too soon.

Maybe you haven’t noticed, but the comedy side of the TV street is a ghost town this fall, save for a few bright spots like “The Good Place” and other carry-overs from prior seasons. Even the best half-hours lack the impeccably choreographed banter, staging and, well, choreography of Amazon’s Emmy-winning hit.

To remind us of this, the season opens with a whirlwind dance through the cosmetics department of B. Altman and Company, the legendary and long-gone luxury department store where Midge works.

This ballet has another purpose beyond dazzling the viewer with a showy, triumphant spectacle to announce the series’ return. As smooth and elegant as the dance is upstairs, it’s executed with a higher degree of difficulty in the basement, a claustrophobic space where Midge Maisel (Rachel Brosnahan) has been banished with the rest of the women who work the switchboards.

At various points it becomes too much for her colleagues but Midge is a talker. Connecting physical phone lines with robotic precision is nothing compared to stacking one joke on top of another as a room fills with people watching in judgment. Indeed, when others have to stop to catch their breath, Midge simply sails in, covers for one co-worker, then another, and another, on top of her own duties.

This dance, such as it is, is about as mesmerizing a depiction of a miserable situation as one can think of. Switchboard duty is purgatory for Midge, a woman who worked the Revlon counter like a champion until she crossed the wrong people.

But even her moonlighting career as a comic is giving her and business manager Susie Myerson (Alexis Borstein) a touch of tsuris – and in Susie’s case, more than a touch. Midge’s big mouth is gaining her a reputation in the comedy world, but it’s also getting Susie in a lot of trouble. And while Midge has the fallback of her parents’ well-appointed apartment on the Upper West Side of Manhattan to retreat to, Susie can only fold herself, miserably, into her tiny, grubby basement flat.

“The Marvelous Mrs. Maisel” heads into its sophomore run with a slew of Emmys tucked into its clutch, including deserved individual awards for Brosnahan and Borstein and the gold for Outstanding Comedy. It has nothing to prove, in other words. Nevertheless, creator Amy Sherman-Palladino and fellow executive producer Dan Palladino aren’t relaxing. As if that were possible.

These new episodes dance, literally and figuratively, with razor sharp dialogue and pointed timing.  Everyone in the cast waltzes through every moment with impeccable timing and neon-bright vitality — Brosnahan most of all, and Borstein alongside her.

But in these new episodes Marin Hinkle and Tony Shalhoub receive more room to explore a fuller range of Midge’s parents Rose and Abe, an opportunity they seize beautifully as Sherman-Palladino takes the duo to an unexpected locale and even less expected emotional places there and after. Even Michael Zegen receives new colors to play with in Joel, who unexpectedly transformed from unappreciative jerk into a contrite, tragic wreck in the final moments of season 1.

All together this cast leads us into the struggle Mrs. Maisel’s rising star story, with Brosnahan meeting almost every obstacle with acid and fire and pearls around her neck. Better still, each of these characters, in their own way, take hold of their dreams, a theme that envelops the first three episodes in ways that can only be described as lovely.

But dreams are fickle, unpredictable things. Catch them and they might buck uncontrollably in your hands, or bite and escape. Or even more devastatingly, maybe they materialize exactly as you pictured, welcoming you to sigh and soften into their embrace before suddenly dissolving into nothing, like spun sugar splashed with the cold gutter water from a careless vehicle speeding by. We call it reality.

“Mrs. Maisel” depicts all of these outcomes and turns through its characters — through a subplot involving Abe and Rose in Paris, through Joel’s bitter striving and through Midge most of all. None of their dreams take them exactly where they envisioned, and yet in every case, what they get seems to be some version of what they want.

A season opening subplot involving Paris is at times as gorgeous as the picture Vincente Minnelli painted with Gene Kelly and Leslie Caron in 1951, and much in the way of most of the series’ scenery about as impeccably choreographed. The series presents it as a siren song inside of which Rose, at least, is ready to exist completely. But there’s that hulking car again, reality, and all of these characters are hitched to her.

Midge, for her part, trudges through the uphill battle she created for herself by crossing the wrong people in power in season 1, an additional obstacle to the garden variety sexism in comedy she and Susie were already facing.

“The Marvelous Mrs. Maisel” original came, saw and slayed just in time to win the mantle of being the first great comedy of the #MeToo Era — well, that and all the Emmys. But Sherman-Palladino insists that its thematic resonance is purely coincidental.

That’s true: Season 1 was underway long before October 2017 and long before the long-standing rumors about a comedy giant were hauled up to the mic, bringing along with it serious discussions about gender discrimination in the comedy world.

Still, one of Midge’s best rage-fueled onstage gallops, steamed up following a parade of slights foisted on her by male comedians envious of her friendship with counterculture comic Lenny Bruce, has a tinge of specific fury about it.

“All comics are comics because something in their lives went horribly wrong. Something went to shit,” Midge observes in one of her therapeutic unburdenings before an audience — performed, it bears adding, on a Tuesday at midnight after she’s been shuffled around to make room for her “betters,” a.k.a. the male comedy regulars at a venue where she’s doing her best to break in.

“But men, those over there and men in general, are the only ones who get to use comedy to close up those holes in their soul. They run around telling everyone that women aren’t funny. Only men are funny!”

Then she asks the audience to think about what fuels comedy: oppression, she says. Lack of power, sadness and disappointment. By abandonment, she says, and humiliation. “Now who the hell does that describe more than women? Judging by those standards, only women should be funny!”

This joke is set in the late ‘50s, but it would have killed yesterday, or in 2017, or any year before that. Midge Maisel speaks to us across the eras with a message of solidarity and determination, and that’s still a marvel.

“Mrs. Maisel” is a hoot for a lot of reasons, not the least of which being Brosnahan’s ability to transform the character’s chronic diarrhea of the mouth into a captivating quality. Wherever she is, if there’s a crowd and a stage – and a chair counts as a stage, to Midge – she’ll find a way to spin out a bit.

But this also underscores the ways that Midge is far from perfect. There are the usual reasons for this, which she lists in the aforementioned observation. But there’s the problem of her profile growing along with her ego, while her filter for propriety fades. A scenario involving a priest is just short of galling, not for the content but, in part, for the unlikeliness of it.

This is one of the instances where the Palladinos stretch believability a bit too far; surely the still-proper Mrs. Maisel can read the room a little, and knows when to be blue and when to keep it kosher. Especially given the fact that the aforementioned scene did not take place in a bar, and had nary a rabbi in sight.

Nevertheless, these are blips. In large part, these new episodes of “The Marvelous Mrs. Maisel” give off enough light to see us through the darkest days and, unlike this festive time of year, they don’t wear out their welcome.

Considering these queens' love of metallics of all varieties, it’s amazing RuPaul Charles hasn’t sent his “girls” on tour for some kind of crazy drag version of a season follies. But at least this special is free with the price of admission, i.e. cable, unless you’re stealing said cable, which makes it just free.

What’s wonderful about this special, aside from its very existence, is that it’s digging way back in to the stacks of “RuPaul’s Drag Race” to return beloved favorites such as Latrice Royale, Kim Chi, Jasmine Masters, Sonique and, of course, Shangela, to the runway to compete for the title of America’s first “Drag Race Xmas Queen.” Eight queens enter, but only one will take the holiday star. And as a bonus stocking stuffer, an extended first look at "RuPaul's Drag Race All Stars 4" is tucked into the rear.

‘Tis the season for baking and sugar shock, for burned cookies and pastry debacles. Over-ambition is the root cause in all those cases and when it happens to you, it’s nothing to laugh at. Holiday holds the expectation of homemade dreams baked until golden and gingerbread architecture. Most of us can't meet such demands. Most of us suck at baking.

Isn’t it nice that Nicole Byer and Jacques Torres are offering us a chance to redirect our baking frustrations into taking joy in the cake fails of others?  Take comfort in watching masterful confectionary creations be copied, badly, by people who aren’t afraid to be the soggy bottom of a longstanding TV joke. And maybe be nicer to the holiday bakers in your life. They’re under a lot of pressure and doing the best they can, imperfectly and otherwise.