The 70th Emmys opened by citing strides in diversity, and ended with a mostly white winners slate 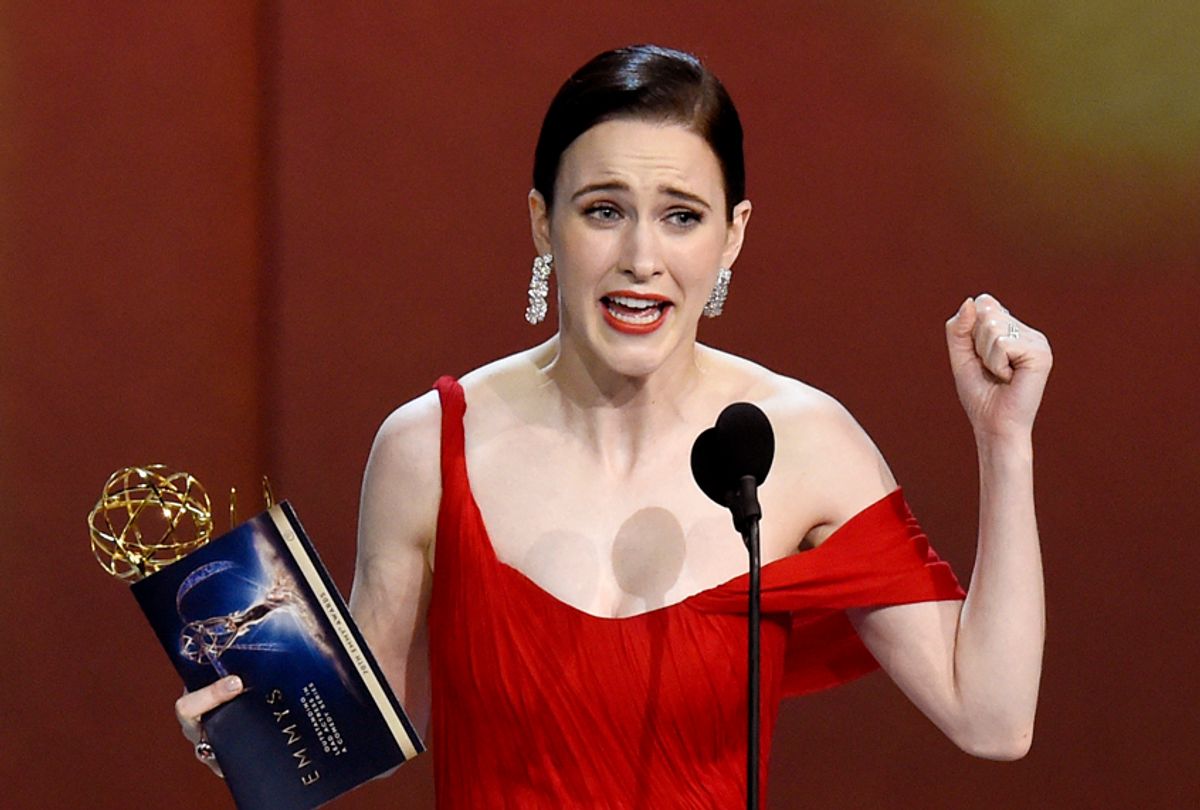 By now, on the occasion of the 70th Emmy Awards, Hollywood should be careful about celebrating its small and very late steps forward with too much vigor.

So it went Monday night, when Emmy showed America that it was cognizant of the times we live in by awarding Amazon’s “The Marvelous Mrs. Maisel,” considered to be one of the first series to speak to the #MeToo era, albeit unintentionally, the Emmy for Outstanding Comedy.

Then, not long afterward, when it could have given the Best Drama to the brilliant final season of FX’s “The Americans” or Netflix’s “The Crown,” Emmy voters rubber stamped an inferior season of “Game of Thrones.”  An institution can’t change too much too quickly, understand.

The Emmys opened with a full-throated celebration of the historic amount of diversity among the nominees in individual performance categories, and went on to once again hand out awards to mostly white actors, writers and directors.

That said, Emmy did surprise a few times, such as awarding “Americans” star Matthew Rhys with a Best Actor statue as well as giving series co-creators Joe Weisberg and Joel Fields the top award in the Writing for a Drama category. Meanwhile, past award winners including “The Handmaid’s Tale” and “Atlanta” were shut out of the major races.

In that respect, the musical opener declaring “We Solved It” would have been dead on, if the “it” in question referred to righting past wrongs; long has “The Americans” been underappreciated Emmy voters.

But no, the song was talking about the industry’s longstanding lack of inclusive hiring in front of and behind the camera. In the moment it was cute. But what followed left something of a weak, watery aftertaste.

“Saturday Night Live” creator Lorne Michaels executive produced this year’s Emmys, which may explain why it embodied the best and worst aspects of his sketch show. Emmy hosts Michael Che and Colin Jost were largely unremarkable, and that’s probably for the best, given their reputation for foisting regressive humor and clunker punchlines into “Weekend Update.”

The only line worth calling out from Monday’s joint monologue was Che’s observation his mother wouldn’t be watching: “She doesn’t like watching white award shows because you guys don’t thank Jesus enough. That’s true. The only white people that thank Jesus are Republicans and ex-crackheads.”

Later, it inspired Chrissy Teigen, co-presenting with her EGOT-winning husband John Legend, to thank Jesus for the celebration of their wedding anniversary.

But Che's and Jost's "SNL" co-stars and show alums didn't help matters much. Fred Armisen and Maya Rudolph, currently co-starring in Amazon's "Forever," strained (and failed) to make a recurring gag in which they played know-nothing experts worth returning to time and again. Will Ferrell attempted to gain mileage out of taking forever to get the mic and breathing heavily for a spell once he did.

The comedic successes that landed had nothing to do with the long-running sketch series. Exhibit A: “Nanette” comedian Hannah Gadsby came on to present the Directing for a Drama Series award and managed get in a few gentle jabs at the culture's misogyny, and came off as more welcoming and fun-loving than the official Emmys hosts. (Future producers, consider asking her to take on the role of awards show ringmaster — she’d be terrific.)

We also witnessed a love bomb for and by Betty White, who seemed to be there because Michaels wanted her to be there. And that's fine because Betty White is an American treasure. That said, there's only one of her and future Emmy producers should not attempt to replicate that brief aside.

Even that would have represented the evening’s peak joy if not for Glenn Weiss, director of “The Oscars” telecast, commemorating his win by asking his girlfriend to marry him from the podium as he accepted the Best Directing Emmy.

Sealing the deal was the fact that he was carrying the engagement ring his father gave his recently deceased mother, whom Weiss also thanked before popping the question.

Magic can be had at the Emmys, after all. Just not the kind planned by its producers. On that front, Emmy produced an opening musical number that mimicked a classic “SNL” opening bit introduced by long-running player Kenan Thompson.

Reminding the audience that this year’s slate of nominees is the most diverse in the award show’s history, he and fellow “Saturday Night Live” castmate Kate McKinnon teased out the ridiculousness of that statistic while skewering the industry’s decades-long habit of declaring a problem to be solved by showcasing token hires.

The “We Solved It” bit had its charms, mainly in the guise of its performers. Thompson and McKinnon were joined onstage by “The Good Place” star Kristen Bell, “This Is Us” lead Sterling K. Brown, as well as fellow Emmy nominees Tituss Burgess of “Unbreakable Kimmy Schmidt,” RuPaul Charles of “RuPaul’s Drag Race,” and Ricky Martin from FX’s limited series “The Assassination of Gianni Versace: American Crime Story.”

The camera cut to “Killing Eve” star Sandra Oh, who made Emmy history by becoming the first Asian American performer nominated in the Best Actress category. It was all a gas, all the way down to the leaping, prancing “One of Each” dancers.

Then the first awards were announced. For Outstanding Supporting Actor in a Comedy, a category that included Burgess and Thompson as well as “Atlanta” star Brian Tyree Henry, the winner was Henry Winkler, co-star of HBO's "Barry."

All deserved to triumph, let’s be clear. But this augured a disappointing trend for anyone hoping a diverse slate of the nominees would result in historic victories and dark horse surprises within the telecast. But there were fewer of those this time around.

Bill Hader winning Best Actor in a Comedy for his work on “Barry” is, well, dandy. But it also denied us the chance to see “Atlanta” creator Donald Glover take the stage dressed as his frighteningly bizarre character Teddy Perkins, the subject of one of 2018’s best episodes.

It is a bitter irony indeed that the “Robbin’ Season” of “Atlanta” was robbed, as many pointed out on social media. And it was far from alone. Adina Porter and Letitia Wright were extraordinary in their work on “American Horror Story” and “Black Mirror,” respectively. They were beaten in the Supporting Actress in a Limited Series Category by Merritt Wever, who scored for her work on Netflix’s “Godless.”

Following suit, the Supporting Actor in a Limited Series or Movie category boasted three Latinx nominees: John Leguizamo, Edgar Ramirez and Ricky Martin, in addition to Brandon Victor Dixon, who wrung every last drop out of his role on “Jesus Christ Superstar Live.” And the Emmy went to Jeff Daniels for his work on, yes, “Godless.”

Trevor Noah could have made history as the first black talk show host to win an Emmy for Best Variety Talk series. Instead, Emmy voters chose John Oliver to win the award for “Last Week Tonight,” the third time his show has come out on top in this category, and its 10th Emmy overall.

To give the awards body some credit, the extraordinary Regina King, who dominated the screen in the Netflix series “Seven Seconds” (which the service canceled, repackaging as a limited series to give King a shot a victory), gained a win in the inclusion column, joined by Thandie Newton’s Supporting Actress in a Drama win for “Westworld.”

King called back to Che’s joke by thanking Jesus, while Newton did her own version by saying, "I don't even believe in God, but I'm going to thank her tonight" before dropping a censored expletive.

RuPaul Charles won an Emmy for Best Reality Host, received at the same Creative Arts Emmy ceremony that handed awards to Katt Williams’ for his guest star turn on “Atlanta” as well as Tiffany Haddish, Ron Cephas Jones and Legend.

But despite the giddy pre-Emmy celebration for “Killing Eve” star Sandra Oh, she lost out to Claire Foy, who exited “The Crown” after its second season.

The aforementioned wins wins benefited from the award show’s habit of rewarding repeat winners, once again demonstrating that the laziness of the Emmy voter has remained a factor. King, Wever and Daniels have all won Emmys before, as has Ryan Murphy, who scored Emmys for Best Directing as well as Outstanding Limited series for “Gianni Versace.” Series star Darren Criss, who turned in incredible work as Andrew Cunanan, won Best Actor in his category.

And Che did score with a filmed bit called “Reparation Emmy,” in which he visited Marla Gibbs, Jimmie Walker, Tichina Arnold, Kadeem Hardison, Jaleel White and John Witherspoon and pretended to give them an Emmy in appreciation for their work.

The 70th Emmys placed performers of color who came after Gibbs, Walker within reach of awards, given them better chances than shows such as “227,” “Good Times,” “Everybody Hates Chris” and “Family Matters” ever received (“A Different World” garnered Emmy nominations but never won.)

But Emmy being what it is, one has to expect it would begin with a spirit of hope and enthusiasm and end with muted celebrations of small victories and a widespread resignation.

Monday’s telecast kicked off with a song that joked about changes afoot in the business, actual shifts that give us reason to celebrate that progress is being made. Three hours later the show ended on time and affirmed the notion that, as we head into a new TV season, behind the scenes it’s still very much business as usual.

Why the director is resisting this simplistic label: Female director