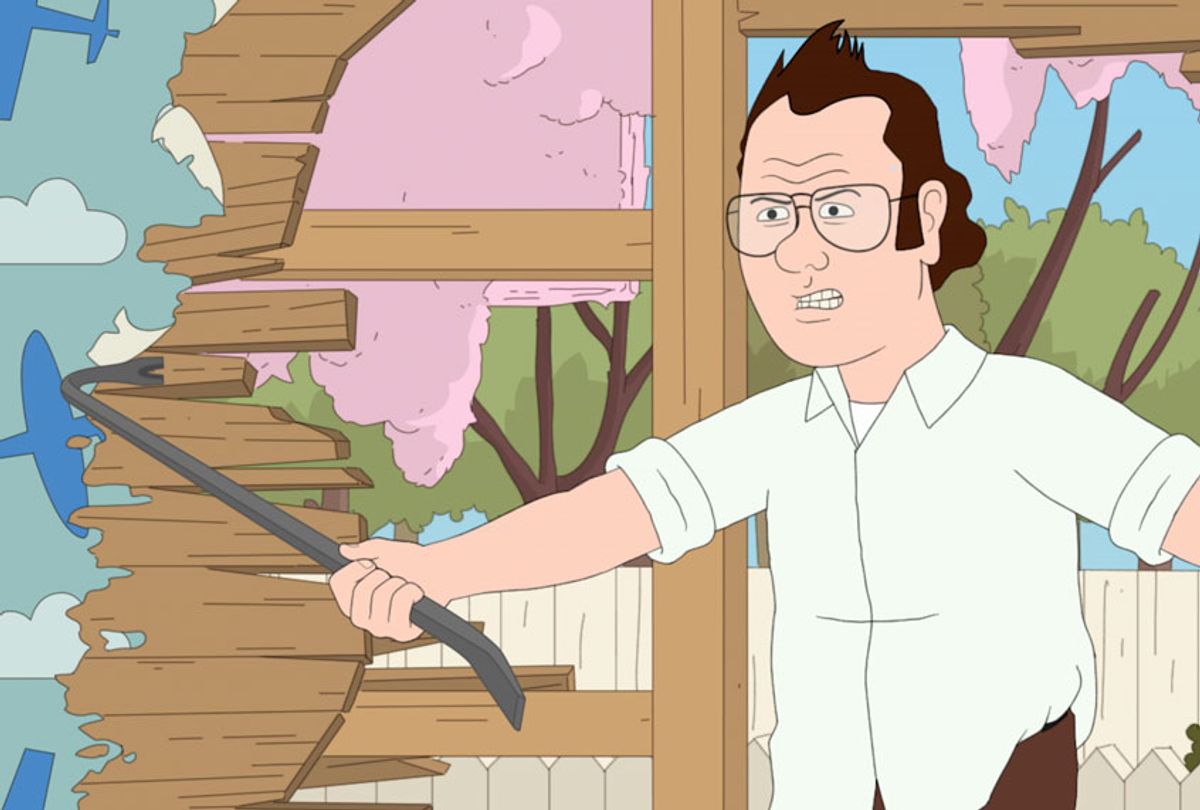 If you follow politics, it will be difficult to watch the third season of Netflix's series "F is for Family" — an animated sitcom set in an archetypal American community circa 1974 — without thinking about the state of the union as it exists in 2018.

This isn't because the show goes out of its way to establish parallels between the issues facing the America inhabited by the working class Murphy family and those which exist in the United States today. Rather it is because, like all good stories, "F is for Family" focuses on creating sympathetic, three-dimensional characters and putting them in believable dilemmas. Of course, given that this is a comedy, the Murphy clan's trials and tribulations are heightened to a semi-absurd degree. But they are still grounded in reality, and as it happens the reality of 1974 doesn't differ all that much from that of 2018.

This is especially true when it comes to politics, although the show's new season doesn't only cover political issues. The overarching plot involves the Murphy family preparing for a new baby, after an unexpected pregnancy happened off-screen between Seasons 2 and 3. Amidst that drama, Frank Murphy (Bill Burr) finds his good sense distorted when he develops a bro-ish crush on new neighbor Chet Stevenson (Vince Vaughn), whose macho bravado intoxicates the desperately insecure patriarch even as his wife Sue (Laura Dern) intuits something is off about her husband's new chum.Sue, meanwhile, continues to reel from depression after credit for her lightning-in-a-bottle kitchen invention was stolen by her boss Henrietta Van Horne (Allison Janney) in Season 2.

The new season also pays more attention to their neighbors and co-workers. Perhaps most notably, Frank's co-worker Rosie (Kevin Michael Richardson) decides to run for local political office, a choice that provides him with the opportunity to help his community but also forces him to encounter racism as a black man and elitism —Rosie is not politically well-connected and his dull-witted opponent is, which causes the media and political establishment alike to write him off.

"Every time we start, we started the show, when we get the writers together for the new season, a lot of it is just talking about,  what was it like in your house growing up?" Michael Price, a co-writer and co-producer of the series who is indelibly associated with "The Simpsons," told Salon. "What was it like, what was your experience? It's interesting because I'd say about half of the writing staff is old enough to remember the time period we're writing about, and the other half isn't."

"We had a lot of stuff in the first two seasons about work, workplace politics, and dealing with Frank's work and dealing with being a boss and not being the boss," Price added. "So, this year we decided we really wanted to focus more on Frank's relationship to his neighbors and to his wife and to his kids. Then we were able to also grow a lot of the characters and expand on them."

"It is based on a friend of mine who's a white guy, but he ran for office and then he learned all of this stuff, good and bad about, when you run for office. It's like, OK, I can get in there and now I can try to steer the boat in the direction I want it to go, but then also you become instantly famous in your district, and then every time you go out to lunch you literally can't escape your job," Burr said, adding that the show would factor in how racism and the politics of the '70s would affect a black politician differently. "That stuff for the next season, I think we're probably going to get to with Rosie."

Once Burr brought up Rosie's political ambitions, the conversation naturally moved toward real-world politics from both the 1970s and now. After all, Frank Murphy is an outspoken Republican, and his ideological clashes with his liberal in-laws provide one of the funniest moments of the new season, when the two bicker over the consequences of the 1960 presidential election between Democrat John Kennedy and Republican Richard Nixon, as well as Kennedy's subsequent assassination and cultural deification.

"Sue’s father insults Nixon, saying, 'Your president is ruining the economy,' and Frank defends him and basically says 'Kennedy's father stole that election, right?'" Price recalled. "Then he goes, 'If there was any justice in this world, he would have been in that car in Dallas — can’t catch a break!' You know Frank definitely voted for Nixon, for sure."

Burr added that he thought it was refreshing to have a complex conservative character on the show.

"Not like in an Archie Bunker way — we definitely made sure that we steered clear of that," Burr explained. "Frank is a square. You know what I mean. He is from the middle of a small town. To him, smoking cigars in the driveway, he probably thinks [that's] rebellious behavior. That’s probably as crazy as he gets."

At that point the question was posed: Would Frank Murphy have supported Donald Trump?

"I think what he would have," Burr speculated. "He probably would have voted against Hillary [Clinton] by voting for Trump. He would have stayed on party line, I think."

"Who knows? Maybe Sue would have wore him down," Price mused. "I think Sue obviously would have voted for Hillary. That’s really interesting. That could be like finding like a flash forward, when they are all super old."

As Burr made it clear, though, he isn't a big fan of trying to speculate about the contemporary political stances of his fictional characters.

"This is hilarious, this is becoming like politically charged about people who don’t even exist," Burr joked. "What is Frank’s stance on abortion? In this current comedy climate, do you think that the character of Frank Murphy needs to apologize to somebody? That is the one thing that I will tell you that I love about this show and everything that I do, is I'm not trying to have any hard line stance. I'm just trying to make people laugh and do it —  and I just try to have it to some reality so it doesn’t get too absurd.

"That’s f**king hilarious," Burr added. "I never even thought that, who would Frank vote for in this election."

I can sum this up with something Burr said at the beginning of our interview. When it came to incorporating socioeconomic, gender and racial issues into his storylines without seeming preachy, he argued that really those issues never go away, so preaching isn't necessary. It paralleled what he later said about the midterm elections (we spoke on the Monday before Election Day), laughing at the idea that people would care what celebrities think when it comes to whether or not they should vote if they aren't listening to the major news networks.

"I mean, all of those things that you've talked about have probably been going on since people have been around," Burr said. "The topics, I don't think are new as far as the human experience goes. I just think they're talked about differently every ten years. Stuff that was cool is now no longer cool; stuff that used to not be cool is now cool. Stuff like that."