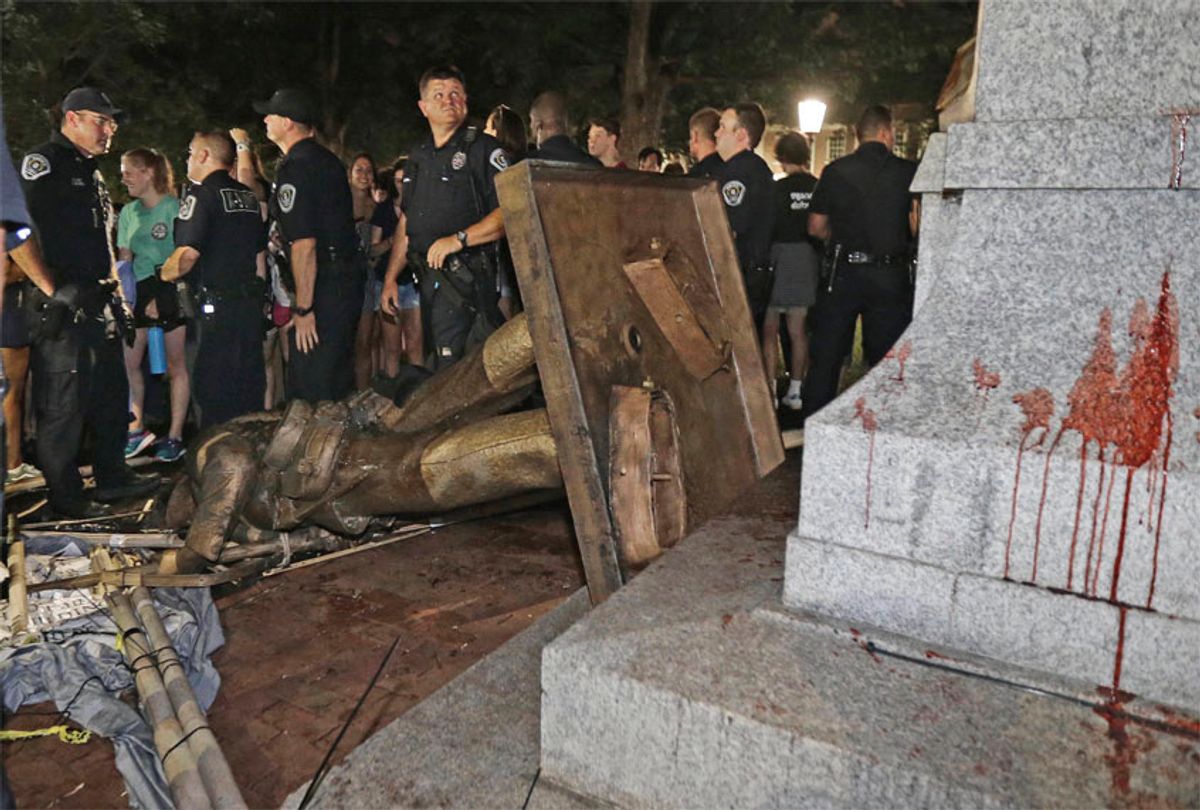 FILE - In this Aug. 20, 2018, file photo, police stand guard after the confederate statue known as Silent Sam was toppled by protesters on campus at the University of North Carolina in Chapel Hill, N.C. Leaders of North Carolina’s flagship university are meeting to decide the fate of a Confederate monument torn down by protesters. The chancellor and trustees of the University of North Carolina at Chapel Hill were finalizing a plan Monday, Dec. 3, for the century-old bronze statue known as “Silent Sam.” (AP Photo/Gerry Broome, File) (AP)
--

Students at the University of North Carolina Chapel Hill are protesting the fact that Silent Sam — a Confederate statue donated to the university by the Daughters of the Confederacy in 1909, erected in 1913 and toppled by protesters in August — is going to be relocated to a new building.

Several hundred students marched through the campus on Monday night to protest the decision to relocate Silent Sam to a new building on campus instead of removing him. The uproar about Silent Sam is part of a larger controversy that has seen Confederate monuments and flags taken down due to protests over how they symbolize racism and treason. The university insists that it is merely obeying a 2015 state law protecting historical monuments, according to The News & Observer.

Salon spoke with prominent student leaders at the college to discuss how the protests occurred.

"Chancellor [Carol] Folt and the Board of Trustees released their proposal and four-part plan to re-erect the confederate monument," Qieara Nicole Lesesne, President of the UNC Black Student Movement, told Salon by email. "Shortly after this announcement, activists from UNC's Black Congress quickly began to organize the protest that was held that night in opposition to the recommendation. Members from the Black Student Movement leadership team began crafting our response immediately to express serious disapproval for the breaking news. Together, leaders and members from both organizations worked to spread the word about the choices made by university leaders and encouraged members of the community to join us in protest. The protest started as a beautiful scene of community, compassion, and allies that supported students and community activists as we took turns speaking out against the continued protection of glorified racism."

Lesesne added, "To me, the statue personifies the stumbling block that my peers and I will have to navigate for the rest of our lives — the color of our skin. I consider it a setback to be forced to acknowledge that the meetings, phone calls, and conversations with administration and university leaders with similar power have only consisted of fabricated hope for an inclusive Carolina. As a student, the only thing in my control is to continue showing my peers that their voices matter to me, even if not to anyone else."

Her views were echoed by Alex Robinson, Vice President of the UNC Black Student Movement.

"I don't personally see what purpose they serve or what place they have on our campus or in our parks or in our cities," Robinson told Salon. "They represent everything that our country isn't about. They represent white supremacy. They represent the Confederate States of America, who were traitors. They literally rebelled against the United States government. As a black student on this campus, and also as a black student leader on this campus and talking to people, having that statue on our campus and knowing what it represented — and looking into the history of it and seeing what was said at its dedication... it really is disheartening. It really says something, especially when UNC, in my opinion, isn't doing the most that it could to support students of color anyway. They invested all of this money into protecting the statue and now building a state of the facility for the statue, when there are so many more conduits or outlets that their resources could be better funneled into."

Alana Edwards, President of the UNC Young Democrats, expressed solidarity for the protest.

"While I was not there personally, I think it was a way for student activists to voice their opinions and kind of protest the $5.3 million tribute to Silent Sam that's been proposed, that was proposed yesterday," Edwards explained. "I know a lot of students are kind of upset about the fact that we are kind of in a way going to re-erect a Confederate monument in 2019."