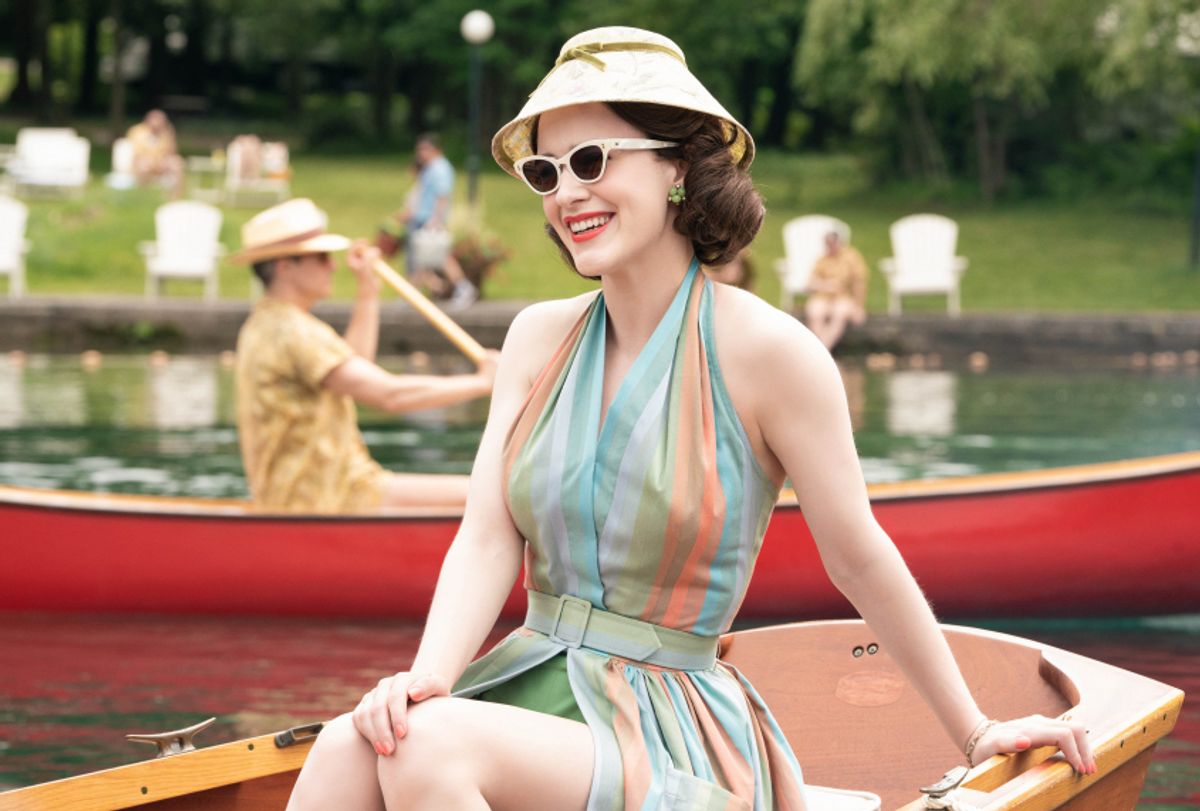 A year ago “The Marvelous Mrs. Maisel” received what may have been the highest compliment any current series is apt to get. As executive producer Daniel Palladino recalled in a recently interview, he and Amy Sherman-Palladino — his wife, and the show’s creator — were at the Golden Globes when their star, Rachel Brosnahan, was summoned over to meet Steven Spielberg.

“And Spielberg said to her, ‘The Marvelous Mrs. Maisel’ is the best Jewish musical since ‘Fiddler on the Roof,’” Palladino told Salon. “We love that.”

In the Emmy-winning comedy’s second season, the creative duo that previously gave us "Gilmore Girls" and "Bunheads" seems to have taken that compliment and run with it. The latest episodes of “Mrs. Maisel” are sublime, as always, but as much as the series seemed to pirouette, glide and waltz in its first season, the second amplifies its choreography in new ways, via the Palladinos’ dialogue and artful blocking, and all without asking its lead to sing. Her song, in a manner of speaking, is her comedy.

As a platform addressing the sexism women faced in the late ‘50s, slyly displaying how much hasn’t changed for women, “Mrs. Maisel” still hasn’t missed a beat. But the steps have gotten more complicated. For in these new episodes Midge Maisel is discovering that comedy is hard for reasons other the fear of dying onstage.

It’s an entertainment business run by men that favors men and disregards women. Midge is pitching her battles on that front in addition to finding her new place in a New York society where news of her marital woes have spread like wildfire. Mrs. Maisel has a lot of reasons to spit fire on that stage, which she does.

Somehow, owing to the irrepressible wit and crisp rhythm that is Sherman-Palladino’s signature, even Midge’s lowest moments have a glow of life to them. And that’s what made her such a balm and a light in 2017, when the collective rage of women across the country was only beginning to boil over the sides of the pot. Amazon’s series speaks frankly the struggles women face in the workplace, and in the comedy scene in particular, in ways that landed with audiences where other series could not.

And in an effervescent conversation with Sherman-Palladino and Palladino conducted prior to the second season premiere, the duo discusses the new level of dancing magic we’re seeing this season and the redemption arc they envision for Midge’s estranged husband Joel, soulfully played by Michael Zegen.

There are many stories that address the fact that the first season of "The Marvelous Mrs. Maisel" came out right after the first stories of the #MeToo movement broke. And you've addressed the fact that the show's depiction of the sexism women face in comedy, the fact that it had a lot in common with what's happening in the real world was, of course, coincidental. But I'm wondering if, in this new season as you were breaking stories if there were any points you incorporated that speak to the issues that are filtering through the culture.

Sherman-Palladino: Midge's journey is a very specific, that of a female changing lanes from one very expected comfortable life to breaking into a form that is not accepting of women. I think that as long as the ratio of men to women in comedy is what it is, I think it's going to be relevant. Because there have been hard fought battles all the way to here. And I didn't write this pilot with any sort of, like, political intention, but just as somebody who's been in comedy for about 30,000 years. It's there. It's part of your experience. It's part of when you walk in that writer's room, what you're going to expect and what you're going to hear and how you have to disseminate every pitch and especially every note that's given regarding a female character.

So while I still say that there's nothing that we look at and say, "OK, great, so that's going to speak to this issue and seem more relevant." That's just never how we work.

Palladino: I kind of think we'd get into trouble if we tried to do it. We're following these characters and those issues are naturally built in.

It's like when you do a mother-daughter story, there are certain issues that are built in that every mother and daughter, no matter what, are going to look at and go, "Yeah, we've dealt with that." And you don't even really have try, it's just sort of innate in the character. And the deeper she goes into comedy and the more she does it, and the more she's on the road and the more she gets opportunities and gets slammed back for whatever she does or says or doesn't do or say, I think, through the filter of what the world is. People can read into it whatever they want.

Would you say the major shift this season is in bringing more coordination between the rhythm and the music of the dialogue and maybe more visuals? I'm noticing a lot more choreography.

Sherman-Palladino: It's something that we love. We've always loved music. I was a dancer, so when I direct, I look at it from a dancer's standpoint in a sense. Because there is sort of a musical, rhythmic quality to the quickness of the patter and the way that we have always crafted our dialogue, even on "Gilmore Girls." There's a musicality to it. So we just sort of stepped it up, because now we've got someone who will pay for all this music. (Laughs.)

Palladino: A friend of ours said, it's a musical without the music. The characters aren't singing, but there are times when you think back on this show and it almost feels like Midge is singing her song.

Sherman-Palladino: She walks with a rhythm and authority. And that switchboard scene, we call it a switchboard ballet because that's what we wanted it to feel like. We wanted to feel like we're opening with a big dance number except it's not a chance ever. It's really showing the repercussions of what she did last year and where she is, and that in her new life now she's building back up again. So we live in that arena a lot in the world of music versus dialogue. And more and more, we're just enjoying living there. It's what been "Bunheads" was supposed to be. But again, we had no money for that either. Simple like that. There you go.

The end of season 1 was triumphant for Midge. But I think about the other side of that with Joel — how he has that last minute of change of heart. He's an interesting character, in that he obviously made a lot of dumb mistakes, but at the same time you didn't make him into the kind of domestic villain you'd read about in a newspaper's advice column.

Sherman-Palladino: Well, we never wanted Joel to be a villain. I always think that, you know, to do a strong woman character, you shouldn't have to make the men weak. A true strong woman can exist in a world of strong men.

Palladino: Amy is proof positive of that.

Sherman-Palladino: Yes. (To Dan) You are, like, f**king Thor.

But I find a lot of times when they want to like justify a breakup or justify a woman's change, writers make the husband such a f**king villain or such a scumbag.

Palladino: Or he eats loudly or he's always coughing.

Sherman-Palladino: And I find myself going, "Why were you with him in the first place?" And the one thing that I really wanted to be clear about Midge and Joel is I know why she was with him. He's adorable, and he's fun, and he's strong, and they go out. And also he picked her. He picked the strongest woman in the room. Joel didn't pick the mousey little girl or the pretty girl who didn't have anything to say. You know, Midge was one toasting at her own wedding, and Joel was sitting there watching her take center stage, pleased as punch.

It says a lot about Joel, too, that he did pick that woman. He did pick the strong girl. He didn't go after the girl who's just going to bring up canapés and then go sit in the corner. But Joel is as much a product of his time as Midge is. You know, in the '50s, men were men and women were women and they all had very specific roles that they were supposed to play.

They were also very young when they got together. They played house and then had two kids right away. And everything in her mind was, it was a picture. It wasn't real. It wasn't two adults, like, really digging into a life together. And the weird thing about what Joel did is it was completely self-destructive. It's all his fault. She never would have gone out on stage if he hadn't have done what he did to her. And yet by him doing this, it gave her this whole other voice, and this whole other life. And now she has the guts to chase it. But it happened because he threw it all away.

And that's something that Joel is going to live with for the rest of his life. And now, especially that he knows that she had the talent that he always wanted and she's got the goods.

It's like he enabled this thing that's going to eat him up for the rest of his lifetime. We feel that Michael and Rachel — or Joel and Midge — there's a little Frank and Ava, a little Lucy and Desi there. They are two people who are never truly going to be able to be apart, and they're never going to be able to be together because of the choices they made. I've always said I think as hard as it was to find our Midge, finding our Joel was very, very hard. Because he had to be somebody who was strong enough and interesting enough that you believed that she loved him. And that was the most important thing. And we got our Michael Zegen.

Well, that's one thing that this show speaks to quite well, particularly in the context of the present conversation we're having right now, in that it answers some of the questions of what role men have in this conversation.

Sherman-Palladino: A lot of different characters come in and out of Midge's world for different reasons. Every time we have a man in there, it doesn't have to be a love interest. Her world, that's her world. Midge has picked a man's world. She said, "I'm going into comedy." And that's saying, "I'm going to be hanging out with men for possibly the rest of my life."

And that's part of what is interesting about her and that's going to come into play in so many different ways, but also it's going to be one of the biggest struggles of her career, to be able to keep forging ahead in the way that she wants to forge ahead. Midge lives in a world where she doesn't understand that there's a big box around her.

And the second season, especially, is really finding out that "Oh, there's another wall here. Oh, there's another wall here! I really knew about none of this! OK, good. Remember the day when I just put on that pretty dress and I walked around here? That was a good day. That was an easy day. I couldn't have just picked that day and stuck with that? Instead I'm sitting here in this place where everything smells weird and I'm dealing with these schmucks."

That is going to be her tug of war, probably, for the rest of her life.