Why #Resistance TV shows are so hard to watch

Shows like "The Man in the High Castle" are well made, and certainly relevant to our times. But do they help? 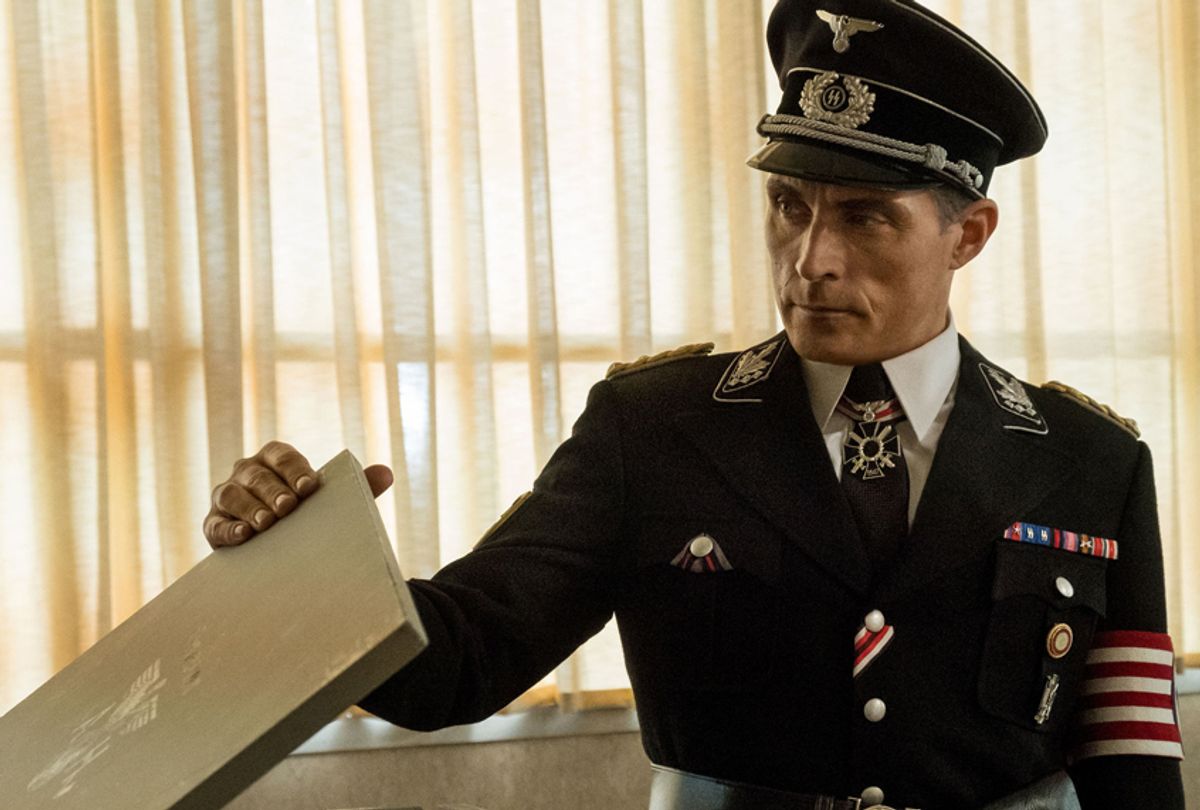 "The Man in the High Castle" (Amazon Studios)
--

Somewhere between a scene featuring machine gun executions of rounded-up innocents, and the sea of Hitler salutes raised at an assembly held to honor a Nazi youth who volunteered himself to be euthanized, it hit me.

There is absolutely no reason for me to recommend viewing the new season of Amazon’s “The Man in the High Castle.”

Some may find this declaration to be irresponsible. More likely, you may simply ignore it. To be clear, just because I’m not recommending it doesn’t mean the show is creatively bankrupt. On the contrary, the bit I was able to stomach looked gorgeously appointed in every respect. Cinematography, acting, writing, editing, the sets, all of it is top notch. Those already invested in this series are going to watch it anyway, and I am not here to advise you any differently.

Rather, my choice is to refrain from submitting any appraisal whatsoever. Doing so would require me to watch the new season, and frankly, I am all out of patience of watching a fictionalized drama exploring the what-ifs of how the United States would look had the Nazis won World War II.

We’re nearly there already, aren’t we? That may seem like hyperbole but honestly, is it? We have a president putting his name on an opinion piece riddled with falsehoods. The news buzzes with tales of voter registration purges and in-depth reports about the school-to-prison pipeline creating a system of modern slavery. We have Nazis, actual Nazis, strolling our streets, flying our flag, getting their viewpoints trumpeted by cable news pundits.

So: let’s watch some fake fascists on TV in our free time!

Thanks Amazon, but no thanks. Amazon is hooking the series to the hashtag #ResistanceRises, but this is one revolution that’s not going to be televised in my free time.

Worthwhile television should challenge us. No student of the medium would declare any differently. And great television accurately reflects and comments on the times in which we exist in ways beyond simply making us think, as “The Man in the High Castle” and “The Handmaid’s Tale” did in their respective first seasons.

But, consider the times. Consider that a number of series have charged head-on at the political movements of 2018 and lost the battle. AMC, for instance, premiered Marti Noxon’s series “Dietland” with great fanfare this spring, announcing it as a show for the #MeToo age.

It didn’t generate adequate ratings to earn a second season, and not for lack of quality or trying. “Dietland” boasted an excellent cast, but it also led with issues the average person is uncomfortable discussing — fat acceptance, harassment, women selling out other women to be reap financial and power brokering benefits from men. Oh, and gender terrorism. All traits that should have made it perfect viewing.

All reasons viewers may have said, “Pass.”

Then consider the timing. Season 1 of “Handmaid’s” occurred in 2017, although the production was announced in 2016, before Donald Trump won. Season 1 of “High Castle” debuted in 2015 when the thought of a fascist dystopia seemed, if not impossible, at least more farfetched than it does a mere three years later.

Each draws from previously published literary works, as does “Dietland.” But Philip K. Dick has a long history with readers and legions of adherents. Margaret Atwood’s novella is a staple of literature classes. Many viewers had a sense of what these series offered, is what I’m getting at. And the fact that works that were speculative fictions in 1962 and 1985 feel apt and too plausible in 2018 speaks to the powerful foresight of their creators.

There comes a time, however, when grim drama created for the sake of realism, or just keeping the story going, is no longer a diversion. It becomes self-flagellation.

And these are but three very extreme versions of didactic television designed to speak to the issues of our time that instead just make us want to curl up in a ball in the corner of the closet. Broadcasts have seen milder flame-outs of a sort.

We’ll never know, for example, if the heat “Roseanne” generated in season one would have continued with a second season, although we’ll soon know if “The Conners” can recapture some of the original ABC comedy’s magic — and ratings — without the participation of the original show’s titular star.

The revival of “Murphy Brown,” meanwhile, debuted to a modest audience. There are a number of tangible business reasons for this as well as stylistic ones. Part of the issue, I suspect, is the writers' insistence upon bludgeoning us with their takes on issues. Thursday’s episode, “#MurphyToo,” was the comedy's ode to survivors, but all it really did was reveal that Murphy Brown is repressing trauma just like the rest of us, and not in a way that was particularly scintillating.

That said, the ratings for “Murphy Brown” held steady, averaging 7.3 million viewers over the first couple of telecasts.

The audiences for “High Castle” and “Handmaid’s” will continue to be there for them too, I’ve no doubt. Completists have come too far to back out now. (And no, we have no idea how large their audiences are; neither Hulu, nor Amazon or Netflix release any audience numbers to the public.) The rest of us will just have to trust their word and save our viewing for later, or never.

Now, this doesn’t mean that TV audiences in 2018 are better served by ignoring what’s going on in the world.  Not at all. Rather, there’s a case to be made that some of the best shows on right now speak directly to the perilous state of our culture, and democracy, but in ways that still honor the writers’ duty to entertain and enthrall their audience.

Season 2 of the CBS All Access drama “The Good Fight” is a blatant rebuke of Trump. That’s a detail of the season, not its main driver. Instead, Robert King, Michelle King, and Phil Alden Robinson use the legal procedural format to depicts the ways in which the devolution of norms is slowly deteriorating the sanctity of law.

Season 2 was written well before the Federalist Society completed its coup on the Judiciary Branch by getting a partisan conservative seated on the Supreme Court. Even so, the message was there as Christine Baranski’s Diane Lockhart and her associates faced down attorneys, Trump allies and malleable, unqualified Federal Court judges placed in their stations for their loyalty to a corrupt agenda as opposed to their fitness to hold such a position.

And whether a storyline is inspired by the headlines or is an extension of the writers’ imagination, it’s often funny and consistently fiery. It doesn’t forget what’s wrong with the world, but it also offers a departure.

Other series incorporate issues driving debate and stoking anxiety into existing storylines as extensions of the characters' lives and jobs. ABC's “The Good Doctor” recently aired an episode including a subplot depicting coded sexism at work without highlighting it in neon. You’d have to notice what was happening to a character, or care enough to notice and bring it up; the A-story proceeds apace no matter what.

And there are shows where we may choose to notice how thoughtfully the writers have depicted these issues all along, whether intentional or not. “Better Call Saul” viewers hailed the determined but beleaguered Kim Wexler, partner and lover of the main character, as demonstrating the travails of the underappreciated office worker.

Hulu’s “Castle Rock” is a horror series on its face, but nestled amidst its many hidden delights is scathing commentary about the justice system, how it unfairly dooms some and facilitates the mistreatment of others strictly on the basis of how they look. You can appreciate it on that level, or you can revel in its seductive, slow-cooker creepiness. Either way, it works well enough that it’s returning for another season.

Another welcome return in 2018, however, is more uplifting, and that’s stories of connection. Season 3 of NBC's "The Good Place" makes connection its central point — the group joined together in its afterlife is back on Earth, but the theory is that the people in the comedy's central foursome are their best selves when they're together. Left alone, they are literally hell-bound. ABC’s best reviewed comedy, “Single Parents,” runs on the appeal of a community of very different people whose solo parenting status moves them to team up. There’s no political overtones within the first few episodes, only a reference to their very different economic stations. None of that matters when the goal is keeping each other sane.

CBS is seeing moderate success with "God Friended Me," a bright drama about an atheist podcaster directed toward the lives of strangers by social media friend suggestions. Obviously it was made for the “Touched By an Angel” and “Highway to Heaven” crowd. But there are a lot of those people, and as many people who identify with the hero who has no religion. The point is to create a story that’s interesting enough to bring these diametrically opposed demos into the same tent.

Connection. That sounds a lot more appealing than “YOUR OVARIES ARE UNDER ATTACK” or tales of midcentury Nazi families, doesn’t it? And it’s a simple proposal, too — fascinate the viewer. Speak to socially relevant issues within the context of fiction, and in a way that offers hope, humanity, and a better version of speculative fiction.

Amazon, by the way, has the second season of a show heralded as the first great series of the #MeToo era coming soon: “The Marvelous Mrs. Maisel,” the Emmy winner for Best Comedy.

But “Mrs. Maisel” was conceived of long before the year of women’s rage kicked off; also, you may have noticed that it’s a comedy, and a bright, sparkling one at that.

Nevertheless, women and men embrace Emmy winner Rachel Brosnahan’s Midge Maisel because she’s smart and funny and perpetually placed in the underdog position. But by going her own way in the comedy world, she’s positioning herself to do something revolutionary. Some may call her a feminist; many would agree she’s a fighter.

All I know is watching “The Marvelous Mrs. Maisel” helps get a person through a grim, rainy day. And that’s how great TV can save us, by upping our resistance during this season of sickness.

Editor's Picks God Friended Me Murphy Brown The Man In The High Castle The Deuce The Good Fight The Good Place “the Handmaid’s Tale” The Marvelous Mrs. Maisel Tv