We all live in "Dietland": This revenge fantasy takes on violence against women in all forms

The central mystery feels messy, but the real dramatic sustenance is in the cruelties its heroine visits on herself 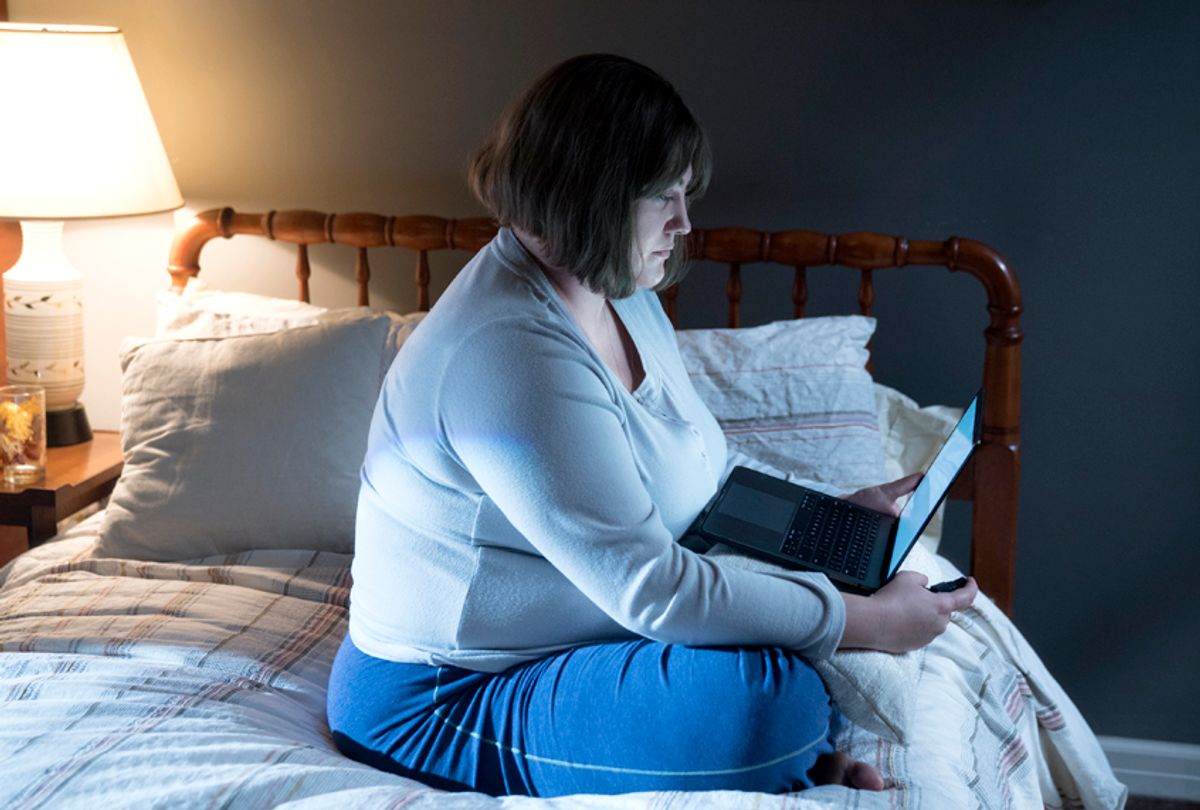 Being a fat person in this culture tends to translate into being expected to treat one’s own body like a hostile entity to be brought under control, tamed. The morbidly obese person's flesh is a prison for some never-before seen thin person dying to get out, the permanent before holding us back from the happy after.

Plum Kettle, the heroine at the heart of AMC’s “Dietland,” lives her life in a holding pattern, convinced that if she can only get a dangerous gastric bypass procedure and drop immense amounts of weight, she’ll finally be ready to claim the big, sexy life that’s been waiting for her.

“Dietland,” premiering at 9 p.m. on Monday, is actually a series about violence. You might not notice that right away, given the focus on Plum, played with fatigued sensitivity by Joy Nash. That said, series creator Marti Noxon ("Buffy the Vampire Slayer," "UnREAL") sounds that alarm soon enough: Bodies begin dropping all over New York City, and the cops soon realize the common thread linking the victims is that each is an accused rapist or sexual abuser.

Until their fatal reckonings, rendered by a mysterious entity that goes by the name Jennifer, the system had allowed them to run free. As subplots go, this one obviously is meant to serve as a revenge fantasy tailored to fit #MeToo and the modern feminist movement.

But the greater violence tearing through “Dietland,” one women like Plum have been subjected to for decades, despite the mainstream messaging of body positivity, is a variety women inflict upon themselves and other women. She’s pummeled daily with messages about beauty standards as well as commercials selling butter-soaked, delicious fast food options she’s forbidden from eating.

Plum, however, has chosen a special hell for herself as the ghostwriter responsible for writing the “Dear Kitty” advice column in Daisy Chain magazine, where she answers letters sent by teenage readers seeking life advice. The real Kitty Montgomery (Julianna Margulies in full succubus mode) is a shallow narcissist too busy to share life advice with mere mortals. And perhaps it goes without saying but she’s also rail thin, lording her bony physique over Plum at every opportunity.

“Dietland” defies facile definition or a simple fit. At its most successful, it’s a lively walk through a woman’s struggle to redefine herself in a society telling her to disappear. But the hook, manifested in a mystery vigilante feminist hunting down rapists and child molesters, fails to solidify enough within the first three episodes to command our attention in a real way, beyond serving up the occasional static shock.

At the outset of a show like this, any shortcomings in the secondary plot are excusable given the complexity of Plum’s interior world, a metaphorical cage of hunger and an oppressively small one at that. Her low self-regard limits her day-to-day interactions with the outside world to brief sojourns between her apartment, her “Waist Watchers” meetings and a cafe where she moonlights as a baker as a favor for her best friend who owns the place.

The only person placing limits on Plum is Plum, and she wouldn’t deny that. But it’s also a familiar response to the abuses the world inflicts on her and all women, making “Dietland” a work that invites the viewer to relate to its heroine as opposed to pitying her.

The artistic flourishes in “Dietland” that illustrate Plum’s inner thoughts with ink-and-paper cutouts augment this sense of separation from the world. In these asides, she’s drawn as a miserable, shapeless dome stuck on a triangular treadmill that goes nowhere while the city hums around her.

Reading this may leave you with the notion that “Dietland” is a glum piece of work; it is not. Noxon and the rest of the writers and editors pour a style into it that reflects Plum’s fun-house mirror of an existence, one frequently invaded by daydreams and wild musings.

At the same time, it’s also one of the few mainstream series to uplift the concept of female pleasure as an element of empowerment too often packaged as something sinful. “Dietland” envelops the excerpts of bliss that Plum allows herself to enjoy in a sensuality that comes across as innocent and sinful all at the same time.

And it’s not an accident that the sexiest moment in the series premiere takes place in the beauty closet of Austin Media, the magazine publisher Plum works for. The object of affection is not a man nor the closet’s keeper of all cosmetics and secret feminist fire-starter Julia (Tamara Tunie) but a seductive creamy color that Julia slides across Plum’s lips. Heightening the tension, Julia casually asks Plum, “What color are your nipples?” When Plum reacts in shock, she explains, “To match.”

From there, she brushes on the perfect blush. “Doesn’t anyone ever tell you you’re beautiful, just as you are?”

Calling “Dietland” a series made for this moment feels repetitive, maybe even lazy. Truth is, it’s the latest in a string of shows voicing the sublimated rage women quietly endure, joining the second season of Netflix’s “Jessica Jones,” BBC America’s “Killing Eve” and Hulu’s “The Handmaid’s Tale,” among others, in this club of truth telling entertainment. Besides, the series has been in the works since 2015, when Sarai Walker’s bestselling novel that inspired the show was first released.

And in the three episodes provided for review, “Dietland” encompasses a great many emotions, blood lust being the least of them. But it could be that Noxon intends to lower the audience into Plum’s existence methodically, allowing us to absorb the barrage of sexist slights washing over her every day in order to prepare us for whatever extremes she takes next.

Nash’s portrayal lends Plum a sense of playfulness that counteracts the loneliness she wears like a cloak. If she outwardly lacks the strength, the cool or the do-or-die rebelliousness of the heroines featured in those other shows, that’s excusable; the actress bringing her to life also grants her a hot-blooded humanity that grabs our attention.

This also makes “Dietland” and Plum more timeless and relatable, perhaps, than the heroines featured in those other series. There’s no “what if” factor to consider here; what’s happening to Plum is precisely what women contend with right now, in this reality. It’s highly likely that a number of women watching share her lot, having been trained to engage with their physical forms as if they are objects deserving of punishment.

Nash’s co-stars augment her performance stunningly, especially Margulies, who portrays her tightly-wound magazine editor with a icy sharpness that makes the villainy she markets as fashion tips feel worse, somehow, than the brazen murders of misogynists. Joining Tunie in the good witch corner of Plum’s life, meanwhile, is Robin Weigert’s crunchy heiress devoted to atone for the shady diet empire her mother founded by helping the people who find her to embrace themselves as they are.

And this eases the entry into a larger story about violence being done toward women en masse in the form of rape, patriarchal subjugation and garden variety day-to-day sexism. “Across the country, a war was starting,” Plum says in voiceover, looking back from a future from whence she tells her tale. In that place, she lets us know she’s still fat. Based on her confidently wry delivery, it also seems like she feels good about herself. She sounds liberated, at last. Maybe that’s where every revolution needs to begin.