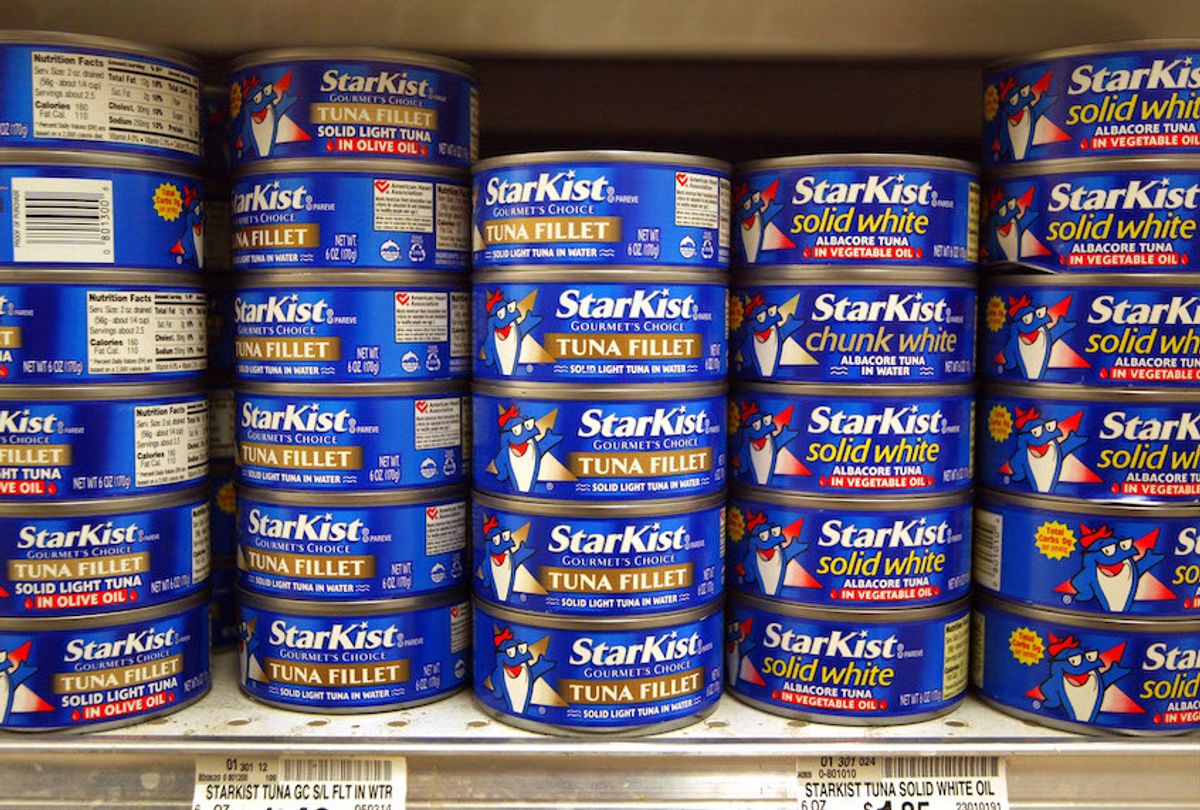 Cans of tuna are seen on a shelf August 12, 2004 in a grocery store in Des Plaines, Illinois. (Tim Boyle/Getty Images)
--

Have you heard? Millennials have killed the canned tuna industry. Why? Because apparently we don't own can-openers.

Over the weekend, the Wall Street Journal reported that canned tuna consumption is way down, it's declined by 42 percent in three decades and has dropped four percent just in the last five years. And tuna companies, particularly the big three — StarKist Co., Bumble Bee Foods LLC and Chicken of the Sea International — are not happy.

While the companies spoke about rebranding efforts, such as trying out new flavored tuna packs and innovative packaging to appeal to a younger consumer base, their more realized strategy is one we've seen over and over in recent years: cluelessly scapegoating millennials for the sake of one's shrinking business.

"In a country focused on convenience, canned tuna isn’t cutting it with consumers," WSJ reported. "Many can’t be bothered to open and drain the cans, or fetch utensils and dishes to eat the tuna. 'A lot of millennials don’t even own can openers,' said Andy Mecs, vice president of marketing and innovation for Pittsburgh-based StarKist, a subsidiary of South Korea’s Dongwon Group."

Tucked just below this insight is the reality that more millennial consumers buy fresh or frozen fish — which, if you follow the story's logic, must somehow be less time-consuming to prepare than canned tuna.

As many people suggested on Twitter, there are myriad reasons to not eat canned tuna and none of them include millennials not owning can openers. Many people simply think it's disgusting, and also there was a whole movement of concern over dolphins being killed as a byproduct of being captured in the nets of tuna fishers, plus concern over its mercury levels.

As Business Insider reported, the smell of canned tuna makes eating it for lunch during the workday a cardinal sin in today's common open office settings where lunch hours away from one's desk are considered almost a luxury. And let's not forget that two of tuna's biggest brands, StarKist and Bumble Bee, were central to a price-fixing scandal that resulted in guilty pleas from the companies and from three executives.

But alas, it can be hard to keep track of all the things that the millennial generation has taken down. There's cereal, mayonnaise, napkins, golf, department stores, savings accounts, home ownership, diamonds, even sex. But the messaging is oddly similar across all of these stories — the shaming of young adults for failing to function in the world exactly as older generations did. Millennials' innovation to survive in the face of massive debt, the instability of the gig economy and lackluster career prospects, is seen in moral terms as a failure to prioritize and is often cast as entitlement.

If it's a PR strategy, it's working. From the New York Times to the Washington Post, the WSJ canned tuna story was picked up and analyzed by numerous mainstream outlets, and it rebounded all over Twitter, with millennials weighing in, even if it was mostly critical feedback. And I kid you not, I even thought to myself on Monday: "Tuna is . . . fine/mostly healthy, maybe I should buy that on the next grocery trip?" Most of the other millennial panic pieces have had a similar reach.

Sweeping, monolithic representations of a generation are rarely as insightful as they purport to be, but perhaps yelling at millennials for not eating enough cheap tuna while complaining that they consume too much avocado toast to ever be able to buy homes is easier than reckoning with the alarm of surging economic inequality, the stronghold of student debt, and a failure to pass universal health care. These shaming trend stories seem to cater primarily to Baby Boomers who still believe they simply worked harder and prioritized their spending better than their millennial offspring have, and so were able to afford houses, cars, and diamond engagement rings earlier in life.

Is the collective schadenfreude induced by millennial panic stories a coping mechanism for generational guilt over leaving a worse-off economy and world for us to inherit? If so, please stop; we've got enough anxiety as is. The fantasy that we could fix what was broken long before we became adults through an older generation's approach to thrifty eating is just that — a fantasy — and indulging in it won't fix anything.

"Healthcare, housing and education are more than five times more expensive than they were for our parents," NPR's Lulu Garcia-Navarro said. "There are fewer steady jobs. Wages have stagnated since the 1970s. I mean, I can go on and on and on. And so its weird that we're constantly talking about how millennials should do this differently, and millennials should do that differently. But we don't talk that much about, hey, the country around us can do some things differently, too."

Media outlets serving up these stories could at least get on board with this millennial principle: shaming doesn't work. (I've personally realized this after many failed attempts to get my boyfriend to shame-watch "Game of Thrones.") Whether we're talking about voting engagement or any other WSJ downward trend report, it applies. And if our experience of the world is that it's collapsing — catastrophic climate change is looming, we've got no savings or sex lives, our entire paychecks are going to bloated rents and costs of living (if we're not still living at home) and we can't ever retire — just maybe, we want to eat something that's a little more satisfying than canned tuna in the time we have left.