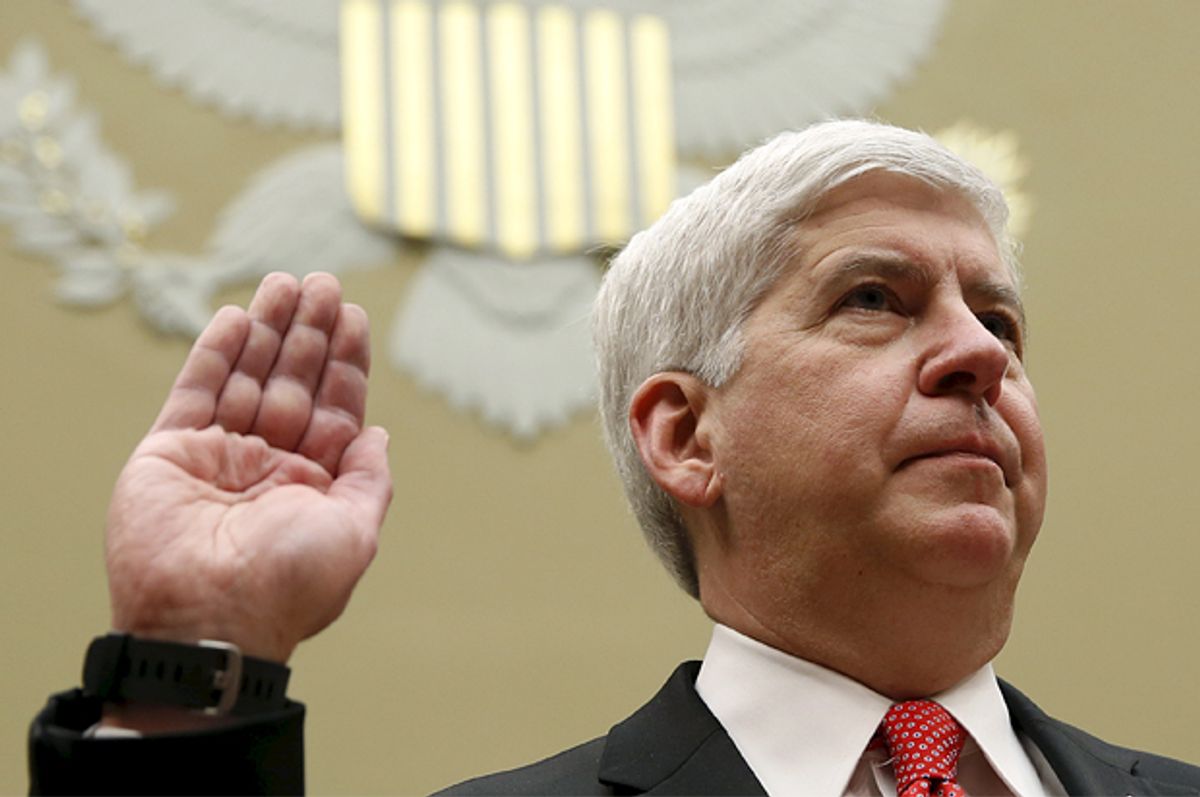 It's been a big week in Michigan history. The Republican-controlled legislature has followed in the footsteps of Wisconsin by voting to advance a measure that would disempower the new secretary of state-elect, the House threw its support behind a bill that would allow the legislature to to intervene in any suit at any stage (thereby reducing the power of the state attorney general), the legislature passed laws that delayed a minimum-wage increase and gutted paid sick leave requirements... and, on top of all that, marijuana just became legal in the state.

To help us make sense of all this — and, in particular, to better grasp the meaning of the fact that the Republican-controlled Michigan legislature is doing its best to reverse the will of the people in electing Democrats to the state's three top jobs — Salon spoke by email with Tom Ivacko, Associate Director of CLOSUP at the Gerald R. Ford School of Public Policy at the University of Michigan.

Can you explain the exact nature of how Michigan's legislature has been able to disempower the newly-elected attorney general, secretary of state and (either directly or indirectly) governor?

First, it is important to note that none of the current lame-duck moves by the GOP have yet been signed by Governor Rick Snyder. Given his past acquiescence to other bold moves by the GOP-controlled legislature, few in Michigan will be surprised if Governor Snyder does sign or allow these bills to become law. Nonetheless, Snyder is not a Scott Walker-style partisan. He is more centrist than Walker, although it is true that he has gone along with the very conservative Michigan legislature on many policies during his two terms. Still, Snyder is term-limited and on his way out, and he may be considering his legacy which will already be defined in part by the disastrous Flint water crisis. Signing off on these kinds of raw GOP power grabs would also be long-remembered in Michigan, and so it is still within the realm of possibility that Snyder will veto at least some of these efforts.

Having said that, the GOP in Michigan has a history of bold moves, regardless of the will of the voters. They locked down the Capitol during the 2012 lame duck session and rushed through Right-to-Work legislation over a chorus of angry protesters outside, in the birthplace of the labor movement. One of their most aggressive moves relates to the state’s controversial Emergency Manager law, which allows the Governor to appoint an Emergency Manager for a distressed municipality, thereby voiding all power of local elected officials. Michigan voters overturned the law by a statewide ballot in 2012, but just weeks later, during the same lame duck session that produced the Right-to-Work bill, the legislature made a few relatively minor tweaks and passed a new version of the Emergency Manager law, clearly overriding the expressed will of the voters. And then during subsequent legislative sessions they adopted the habit of including funding provisions when passing new bills (ostensibly for implementation of the laws), which prevents those laws from later being subject to citizen-led ballot initiative repeal efforts, according to the Michigan Constitution. So, the GOP in Michigan has a well-established history of making remarkably bold moves to further their own goals. This lame duck session may take it up a notch, but it fits a pattern.

Finally, the GOP controlled the redistricting process in Michigan after the Census in both 2000 and 2010, and it has very effectively gerrymandered the state, helping cement its power in the legislature, and clearing the way for these kinds of strong-arm approaches.

Is there anything that Michigan's incoming Democratic officials can do to effectively respond?

If Governor Snyder approves the bills, options for the incoming Democrats to reverse the new laws appear limited, given that the incoming state legislature will remain under GOP control. One avenue would be going to the courts to try to reverse the laws or otherwise limit their impact. If that proved successful, then Governor-elect Gretchen Whitmer will have veto power when she takes office, to prevent the legislature from simply passing some new slight variations of these bills, as has happened in North Carolina. And the new GOP-controlled legislature will not have enough votes on their own to overrule her vetoes.

Otherwise, new ballot initiatives targeted for 2020 will be another avenue to try to reverse these policies, or to adopt new laws that effectively replace them. The success of ballot initiative efforts in Michigan in 2018 shows this can be a worthwhile effort for opponents of these GOP efforts, though the hurdles are significant.

What potential Democratic policies are likely to be thwarted as a result of these maneuvers?

Another major focus is the legislature’s effort to undermine the authority of the Attorney General to represent the state’s interests through litigation, as the legislature is attempting to give itself the right to intervene in any court case.

Environmental policies are another area where the GOP is attempting to limit the ability of incoming Democrats to take the state in a new direction. These efforts would impact regulation of wetlands, as well as the very controversial “Line 5” oil and gas pipeline that runs underneath the pristine waters of the Straits of Mackinac. Environmentalists want to shut down the aging pipeline to prevent the possibility of an oil spill, which would be an environmental and economic catastrophe according to modeling.

Other policy areas in which the GOP is attempting to maintain control include paid sick time and minimum wage laws, and aspects of the citizen-approved anti-gerrymandering and voter rights ballot initiatives that were just overwhelmingly approved by voters in November.

How can the Republican attempts to disempower the new Democratic officials be contextualized within the framework of their recent efforts to gut minimum wage and paid sick leave laws?

This appears to be part and parcel of a bold power grab by a diminished GOP, before they lose the ability to control both the executive and legislative branches of state government, as they’ve had over the last eight years. The anti-gerrymandering ballot proposal passed by voters in November may reduce the GOP’s power again in the future, as they lose the ability to define GOP-friendly districts. So the efforts underway now in lame duck appear to be a strong-arm effort to limit the future power of Democrats to reverse some of the policies put in place by Republicans during an era of unified state government control.

How does the legalization of marijuana in Michigan today complicate the bipartisan political scene in the state?

The incoming Democratic Governor and GOP-controlled legislature will need to work together on how best to regulate what will be a new industry of legalized marijuana in Michigan. So far Governor-elect Whitmer has said repeatedly that she is committed to working with the legislature in bipartisan fashion, and that she intends to resurrect regular “quadrant” meetings with the majority and minority leadership of the state House and Senate, in order to build strong working relationships. The current power grab by the outgoing GOP legislature will likely strain these new relationships at the very start of Whitmer’s term, so it remains to be seen whether bipartisanship can be realized, or whether it will be a pure Michigan pipe dream.