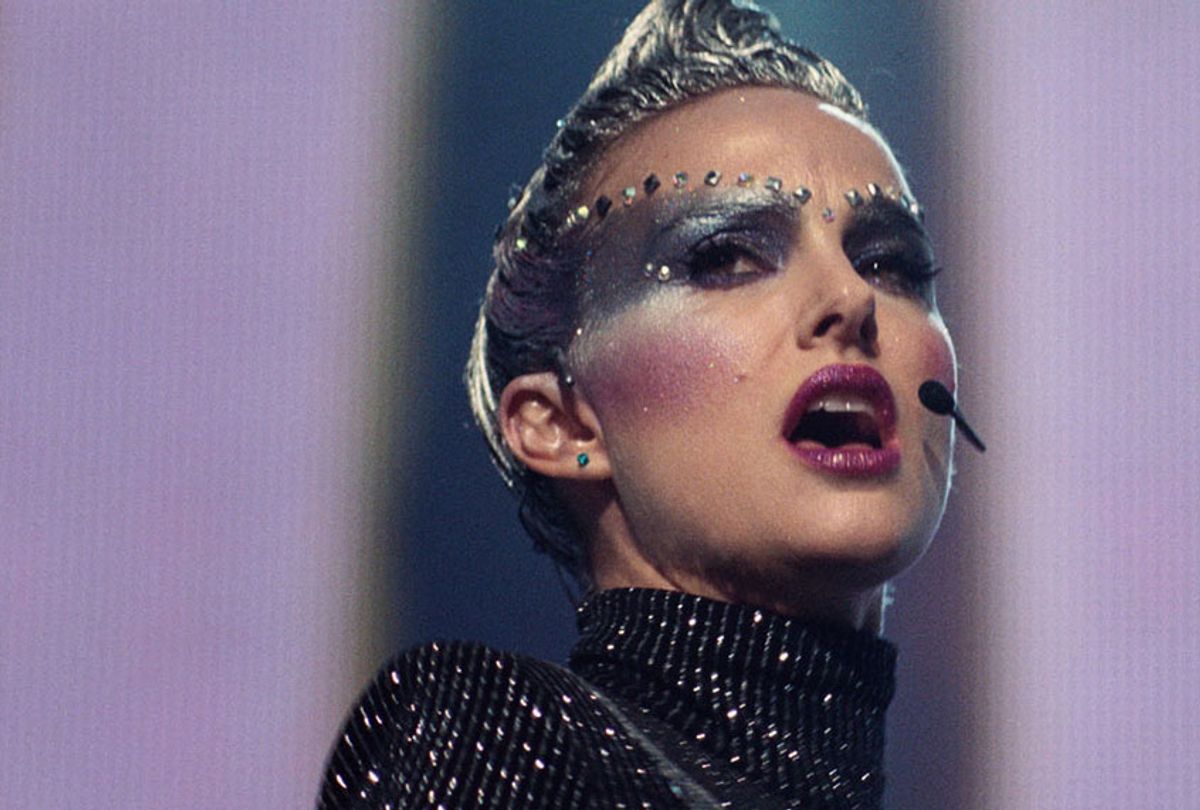 "The Childhood of a Leader" director Brady Corbet’s sophomore effort behind the camera, “Vox Lux,” is a stunning piece of cinema. This hypnotic and impressive drama will shock audiences with its prologue, a horrific scene involving a school shooting that sets the story in motion, and it will also bewitch or bewilder viewers with star Natalie Portman’s phenomenal performance, most notably during a concert sequence that comprises the film’s finale. In between, there are plenty of ideas — arguably too many — for folks to chew over and digest.

Act 1 of the film, entitled “Genesis,” takes place in 2000-2001 when Celeste (Raffey Cassidy) survives a school shooting and is inspired to write and perform a song at a vigil. Her anthem about anger, violence and grief becomes a hit and she is soon courting a record deal. A mature teenager, she hires a manager (Jude Law), works with the label’s publicist (Jennifer Ehle), and takes dance cues from a choreographer before heading to Stockholm for a performance. This all happens relatively quickly, as Corbet, who employs a handheld camera and speed-motion photography, captures the urgency of the action and the passage of time.

But even as narrator Willem Dafoe explains Celeste’s devotion to God, music, and her sister Eleanor (Stacy Martin), there seems to be something else at work here. And therein lies the fascinating subtext of “Vox Lux” — it’s a satire and a cautionary tale told in reverse. The film is certainly being ironic when Celeste states, “I don’t want people to think too hard. I just want them to feel good.” Corbet’s film, about the loss of innocence, is neither breezy nor upbeat. It’s a dense, intense film that mirrors Celeste’s never-ending dream of speeding through a tunnel. It throws viewers into a suspended state, a limbo where one is not always sure of what is being shown, but it is impossible to look away. That’s what makes it great.

Act 2 of the film, “Regenesis,” takes place in 2017, and opens with a shooting on a Croatian beach. The terrorists wear masks like the one Celeste wore during a video she made back in her teens. Now, Celeste is 31 years old and played by Natalie Portman. (In a canny bit of casting, Raffey Cassidy, who played Celeste in Act 1, plays Celeste’s daughter Albertine in Act 2; Stacy Martin plays Eleanor, Celeste’s sister, in both acts).

Portman arrives in the film like a force of nature, tearing into her role with reckless abandon. Portman is so much fun to watch behaving badly that viewers may actually root for her to self-destruct; she is that entertaining. Her Celeste is a motormouth, as seen in a hilarious lunch scene with her daughter in a New York diner where she rants about Eleanor and begs the counter staff to serve her a decent glass wine in a to-go cup. She gets into a fight with the manager who simply wants a photo. The scene shows how quickly the once-mature Celeste had devolved into an entitled egoist, and Portman delights in making a dramatic exit. (She gets another opportunity in her hotel after a fight with her sister.)

However, Portman never makes Celeste a camp figure, despite her character’s silly hair, makeup, and costumes (all of which are appropriate). She plays her press conference scenes like a performance — giving folks the “show” she thinks they want (or expect) from her — by saying reprehensible or incomprehensible things. Celeste, once meant to be a symbol of strength and resilience, now comes across as unconstrained and unbearable. This may be why she is beloved by fans, but not by anyone who knows her.

Corbet deliberately lets viewers connect the dots and determine what to think about Celeste, her politics and celebrity. The film, which is elliptical at times, also can go over-the-top, but his approach challenges and provokes the audience. There are themes of rebirth, discussions about morality, manifestos of radical nihilism, and ideas about coping with trauma, both individually and collectively, that resonate. But Corbet never insults viewers or holds their hand. A scene late in the film — where Celeste, having consumed copious amounts of drugs before her concert, insists on stopping the car and heading out on to a beach to have a moment of silence — may be earnest, or it may be sardonic; viewers will have to decide for themselves.

Moreover, the film’s big finish, an extended concert sequence featuring Celeste, is an absolutely wondrous. Portman gives it her all, gyrating around the stage in a slinky, too tight sparkly bodysuit while expressively singing lyrics like “I’m a private girl in a public world.” (The vapid songs — which are perfectly chosen — are by SIA, and the thumping beat is likely designed to bludgeon viewers). There is a tension as to whether the trainwreck of a celebrity that is Celeste will make it to, or through, her performance. But such is the magic of this spellbinding film; viewers come to care about Celeste, despite her being such a despicable person. Part of that is Portman’s edgy performance, but it is also Corbet’s remarkable achievement.