"Ben Is Back": Julia Roberts doesn't save this uneven addiction drama 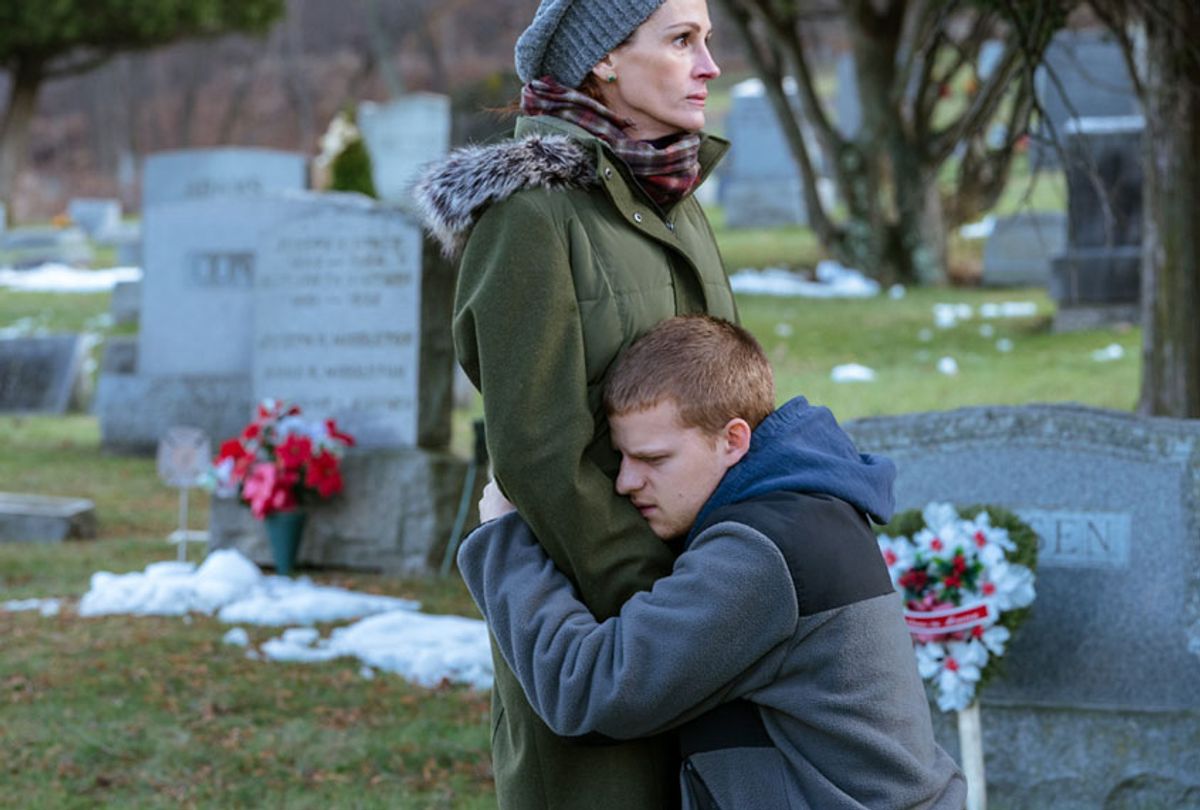 Julia Roberts and Lucas Hedges in "Ben Is Back" (Mark Schafer/Courtesy of LD Ent./Roadside Attraction)
--

Was “Ben Is Back,” about an addict’s unexpected return home, meant to be a holiday hate-watch? It sure feels like it. Writer/director Peter Hedges asks viewers — and its main characters — to spend an uncomfortable 24-hours together on Christmas Eve. But their journey is neither as harrowing nor as emotionally draining as the filmmaker thinks it is. It is all calculated emotional button-pushing. The best thing that can be said about this film is that Hedges isn’t going for warm and fuzzy feelings.

The filmmaker previously made the enjoyable and piquant holiday-themed comedy-drama, “Pieces of April,” about a dysfunctional family at Thanksgiving. He uses the same outline here: there’s a screw-up title character (Lucas Hedges, the director’s son) with a suffering/domineering mother named Holly (Julia Roberts), an insufferably perfect sister named Ivy (Katherine Newton) as well as a benign-ish father (Courtney B. Vance) all hoping Ben doesn’t spoil everything as he always does. As the film suggests, his list of sins is wide and deep, and many of his past indiscretions will be revealed, like doors opening on an Advent calendar, over the course of the story.

“Ben Is Back” also traverses the same territory as the recent, better drama, “Beautiful Boy,” about a young man’s addiction and the impact it had on his father and family. And like that film, it features privileged white folks at the center, as if to reinforce the idea that addiction cuts a swath through families regardless of race, class, or gender. (But we’re still going to focus on the sad rich, straight, young white guys.)

Hedges’s film may speak truths about issues of addiction and recovery, and the hell that addicts put their families through, but it cudgels viewers by having the characters talk about “rigorous honesty" and “truth” as they obviously and ironically lie and connive. It is hard to believe anything Ben says when he arrives or opens his mouth. He claims his sponsor thought it was a good idea for him to return home, to show “how good I’m doing.” He then recounts a story of farts in a car that Holly thinks is hilarious. Ivy, however, is rightly suspicious of this prodigal son, and says Holly is trying too hard. But that’s what Holly (and Hedges) does. She wants to have a good feeling about her son’s return. Nevertheless, she hides the pills and jewelry, because they are triggers and temptations. After pressure from her husband, she insists she will stick to Ben for the next 24 hours.

“Ben Is Back” shifts into gear once mom and son leave the house for a trip to the mall. (The film’s town is never identified, so it represents any/everywhere—as in: this is a cautionary tale that could happen in your very own neighborhood!) There is a didactic scene of Holly talking frankly to the doctor who got her son hooked on drugs, as if to excuse parental responsibility. There is also an ominous image of a character who will figure heavily in the story later, especially as mother and son go to some disturbing places seeking catharsis.

Ben and Holly talk and talk trying to gain understanding of the situation. But even a scene set the safe space of a 12-step meeting, where Ben cracks jokes and tries to earn sympathy, comes off as disingenuous. Mom is too blinded by her love of her son to notice how bad he is. Her anger at Ben dragging her (and her family) into his mess comes and goes. It enlivens a moralizing tough-love scene, as when Holly takes her son to a cemetery and asks him to pick out a burial site — because he will soon be dead if he doesn’t change. Nevertheless, the scene falls flat and feels preachy. In contrast, an episode where Holly vomits after piecing together what Ben did to get his history teacher’s Oxycontin is a bit much. The film is actually most interesting to watch Holly’s moral compass shift in any direction to help her son — especially when she justifies his bad behavior to help him process his past actions.

One problem with “Ben Is Back” is that it cannot find the right tone. The film eventually goes off in thriller-like direction with Ben and Holly searching for the family dog, which has been stolen by one of Ben’s former associates to whom he owes a debt. These scenes are the most engaging, but that may be because they are action-oriented, and the characters have finally stopped freakin’ talking about their problems.

Regardless, Hedges plants all kinds of details that are meant to pay off later but fail to deliver any real impact. This is especially true regarding a subplot about a young woman who died as a result of Ben getting her hooked on drugs. His survivor’s guilt never feels as palpable as her mother’s (Rachel Bay Jones) grief. And a scene between the two mothers is painful, but in a manipulative, not heartbreaking way.

When Holly loses Ben, she searches for him not unlike George C. Scott in “Hardcore” going into the seedy world of pornography to find his lost daughter. It is almost laughable to watch Julia Roberts wandering around a site full of addicts on a dark winter night searching for her child. Her expression is not one of disgust, or shame, or fear; she looks like she’s shopping for an outfit and doesn’t like what she sees.

Roberts never quite disappears into her role as a sacrificial mom. That is both a blessing and a curse. Her tics and her smile are overly familiar, but her performance does work when she is being empathetic. Her best moments have Holly making some questionable decisions, though her heart is in the right place. Ultimately, Roberts just seems miscast.

Hedges fares even worse. The young actor seems to have cornered the market on playing troubled youth, but it is hard to care about his character because Hedges has no range. Just as his performance in “Boy Erased” failed to convince he was struggling with his sexuality, Hedges never seems to be truly fighting addiction here. It is as if he has come home from prep school, not rehab. He doesn’t have the desperation that Timothée Chalamet displayed in “Beautiful Boy” that made that performance resonate.

By the time Ben and Holly are locked in a pieta-style tableau, with light shining from behind and above them, “Ben Is Back” has truly hit bottom. The elder Hedges needs to make amends.